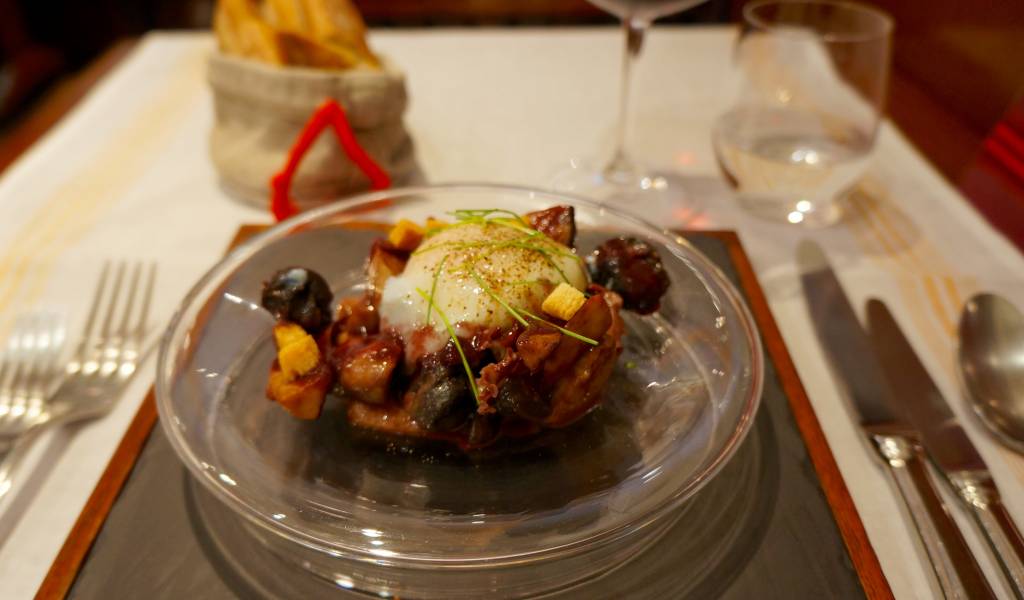 Like a lone tree in the middle of a field during a thunderstorm, Michelin is drawn towards a particular type of establishment to award its coveted stars. Although having tried to revamp its image as the definitive primer on the often stuffy, elitist world of fine dining, this perception nonetheless persists and is likely to stay for some time. Take, for example, the recent controversy about the two Michelin star restaurant, Sushi Mizutani, in Tokyo. With its strict reservation policy for non-Japanese customers, Sushi Mizutani could be accused at worst of cultural and/or racial discrimination, and at best of embodying a supercilious attitude towards potential customers, some of whom may not be familiar with fine dining etiquette. Sushi Mizutani, however, is not the first Michelin star restaurant in Tokyo to cast a suspicious and perhaps even accusing look towards its customers. One needs only to mention a particularly revered sushi restaurant in a basement building to know that many Michelin restaurants still expect a high level of decorum from its guests, which may in turn create discomfort for those hoping for a relaxed, not to mention welcoming, atmosphere with their meal.

Luckily, not all Michelin star restaurants in Tokyo have such discriminatory policies. That brings us to Lugdunum Bouchon Lyonnais, a one-star Michelin restaurant located in the upscale district of Kagurazaka, Shinjuku-ku. Tokyo Cheapo has already shown you that it’s possible to dine at a Michelin star restaurant without having to pay your meal back by signing your life away as the restaurant’s new dish pig; for proof, head to Kyourakutei and Chuugoku Hanten Fureika during their lunchtime service for some top-notch soba and dim sum. It’s the same here with Lugdunum Bouchon Lyonnais, except for one important distinction. Owner/chef Christophe Paucod separates himself and his restaurant from the pretensions of haute cuisine, instead going back to his roots in Lyon and seeking to emulate the warm and convivial atmosphere of a bouchon (eatery). Paucod pays tribute to his homeland by serving dishes typically found in a bouchon such as homemade Lyon sausage with puréed white beans and an assiette of deli meats, including the popular Rosette de Lyon (cured sausage). While each dish is being prepared, you can admire the wrought iron spiral staircase leading to the second floor or enjoy the many paintings of Lyon in the dining area. It is Paucod’s wish that you not merely leave Lugdunum Bouchon Lyonnais with a satisfied stomach, but that you are inspired to visit Lyon after tasting its cuisine and being in amongst some of its precious artefacts and curios.

Cheapos who are foodies and foodies who are Cheapos can be happily satisfied in choosing either the Le Menu Express (1,850 yen—only available on weekdays) or Le Menu du Déjeuner (2,850 yen). The Le Menu Express includes a salad plate, Lyon style bowl, and a choice of seasonal main dish (fish or meat). Having glanced at the menu and marvelled at the range of luxurious ingredients being used, I quickly chose the three-course Le Menu du Déjeuner. Putting it bluntly, this option is an absolute steal. Entrées include a terrine of pork hock and foie gras and a fricassee of snails, mushrooms, and poached egg. Mains range from traditional highlights of Lyon such as the quenelle (a poached, dumpling-like mixture of fish and chicken) to less regional dishes like rabbit confit with mashed potatoes and salad. Desserts are tried and trusted as well as being ill conceived; a vanilla panna cotta looks the part although not strictly being French, whilst a matcha pudding seems like a gesture to humour the local clientele.

The fricassee of snails, mushrooms, and thickly cut pork are lovingly tossed in a red wine sauce. Once broken and combined with the other ingredients, the poached egg gave the dish a silky, creamy texture. In themselves, snails do not have a distinctive taste; instead, they add texture to a dish and enhance the flavours of whatever they are prepared in. The snails had enough chewy resistance to settle out the infrequent crunch of the croutons in the dish. The combination of pork, snails, mushrooms, and egg was ultimately an exercise in bringing the farmyard to the table; each of the primary ingredients related to one another in being food that was eaten by the animals or within their natural habitat.

Many people shy away from blood sausage, thinking the taste will be muddy and well, ‘bloody’, not to mention the texture being gritty. A good blood sausage or boudin noir, however, cannot be further from this misconception. Like many other dishes that use parts of the animal deemed as offcuts, boudin noir is a food which was created as a deterrent against food wastage during periods of intense privation. As such, it’s not a flashy dish, but something which should provide sustenance, energy, and more than that, a full stomach, before one does any hard labour. The boudin noir at Lugdunum Bouchon Lyonnais was delicately flavoured and smooth. Eating it along with the puréed potatoes was a lesson in richness. Fruit and pork are natural allies, so the caramelised apples worked perfectly with the boudin noir. It was a large piece of sausage, however, and for that reason a couple of more slices of apple would have been a welcome addition.

I’ve always said that two desserts are better than one, so for that reason I was happy to have ordered the pink praline tart with a meringue ‘snow egg style’. Often referred to as an oeuf à la neige (snow egg) or île flottante (floating island), this classic French dessert consists of a meringue that sits – or even floats – on top of a pool of crème anglaise. The dessert chosen is a one-way ticket to having a mouthful of cavities; it’s sugar on sugar with more sugar, but for those who like their desserts sickly sweet it’s a fabulous option. The chopped hazelnuts on top of the meringue gave this part of the dessert substance; the meringue, so light, literally dissolved the moment it was put into my mouth. The praline tart had an almond base that was short and buttery. Together they were a delicious and indulgent way to the end the meal. Nonetheless, they were incongruously placed together on the same plate with little to unify them apart from their colour and the snazzy icing sugar fleur de lis between them. Perhaps if they were made smaller and were part of a dessert platter then both would have made more sense and been less overpowering in their sweetness for the eater.

Lugdunum Bouchon Lyonnais is another fine example of a Michelin restaurant which enables its food to be accessible by charging different prices for lunch and dinner. The service is inviting and friendly, reflected in the multilingual waiters that take the time to explain how their food is sourced and prepared. Customers who are intimidated by the prospect of going to a Michelin star restaurant, for all the social baggage that it may entail, can be assured of a casual, friendly, and not to mention delicious, meal at Lugdunum Bouchon Lyonnais.