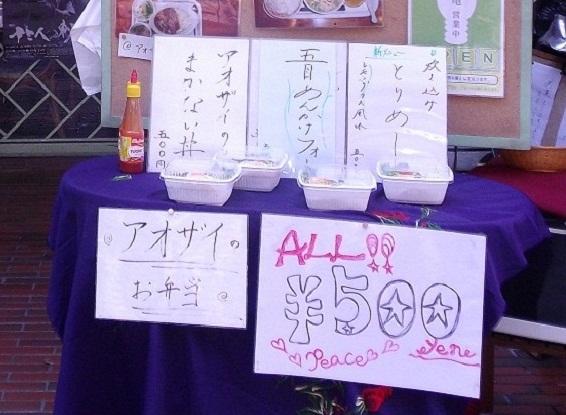 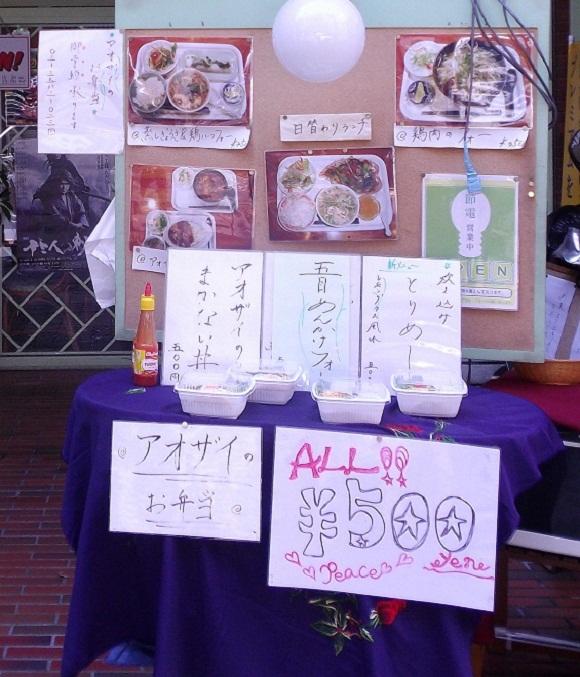 The dress code at restaurants in Akasaka certainly isn’t strictly pearls and diamonds but something tells me that my disintegrating Cons would not be welcome to lunch.

Deutsche Bank has its offices in the area, as does a handful of other international “financial services” firms; the ANA Intercontinental and the Ritz-Carlton monopolize skylines at opposite ends of the neighborhood; and I’m as likely to get run over by a Mercedes-Benz as any other car whilst rushing deliveries for my part-time job. 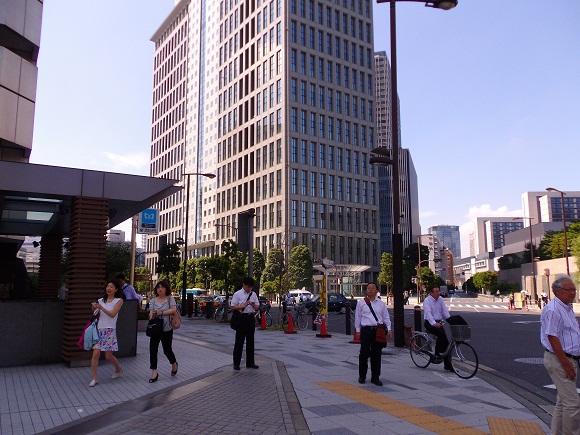 In short, the residential and commercial district of Akasaka, nestled between Aoyama and Roppongi, might be what’s known as an “upscale” neighborhood–which should never deter you from squirreling out a reasonable meal. In the name of which cause we direct you to one of the side-streets of the Sotobori-dori, an artery clogged by hungry businesspeople between roughly 11am and 2pm. At this time restaurants temporarily extend onto the sidewalk, packaging set lunches at discounted prices as an economical and efficient pick-up sold from small manned booths (or unmanned, as the case may be–the honor code prevails). 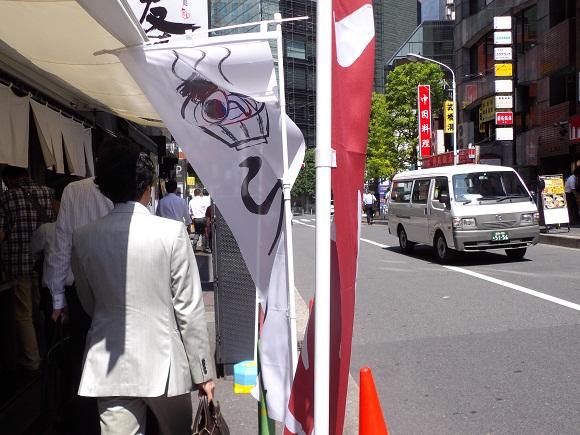 To our luck, anyone can take advantage of these deals, whether you’re touristing around for a glimpse of Akasaka Palace, Nogi Shrine, Tokyo Midtown, or the nearby Roppongi Hills, or if you’re a resident of the area, or indeed a workweek lackey, or even if you’re a category unknown blown in by chance.

It might not have the dramatic potential of infiltrating a university campus, but you could always put on a tie and a harassed expression to get in character. Occasionally muttering things about “stocks” and “bonuses” might help.

Non-mathematic random sampling of shop fronts on the street yields quite a diverse lunch selection: 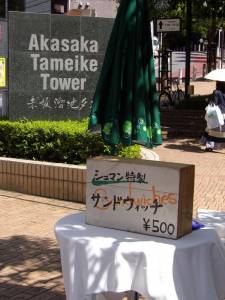 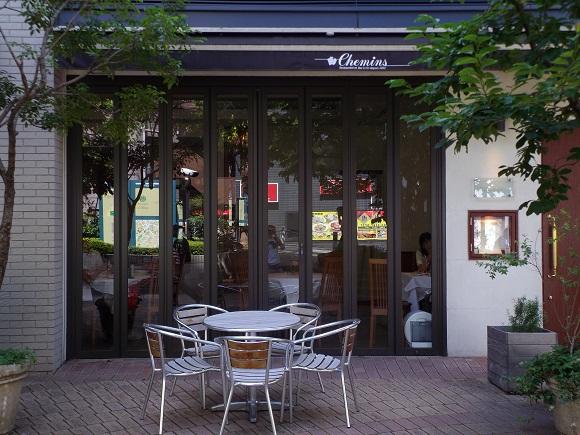 Sandwiches from Chemins are sold on the restaurant patio for 500yen; whereas the lunch menus inside run between 2,800 and 5,300yen. A comparatively good deal–and you evade the restaurant dress code prohibiting short sleeves, t-shirts, and other “light, casual” clothing. 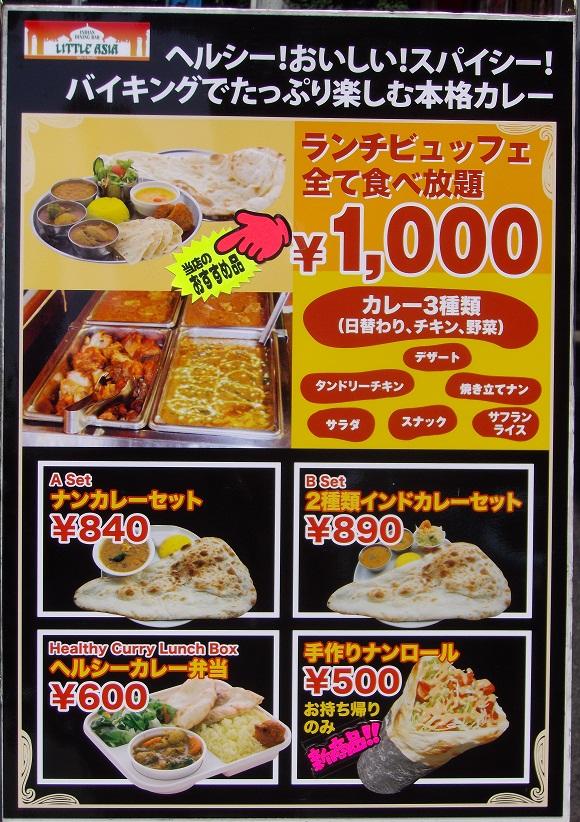 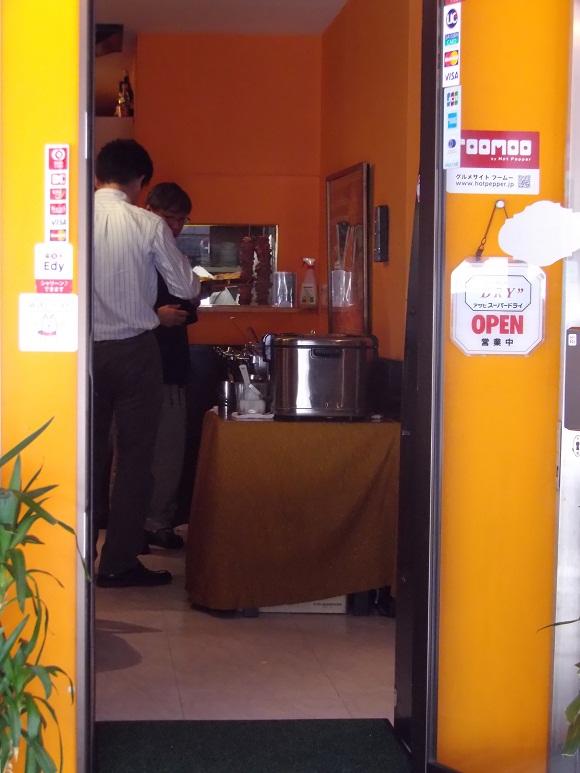 Should you have the time and stomach capacity, Little Asia serves 1,000yen lunch hour buffets daily, with three kinds of curries, tandoori chicken, saffron rice, naan, salad, snacks, and dessert; as well as smaller sets or “lunch boxes” for less. The latter are also packaged for take-out and distributed at a stand outside the restaurant. 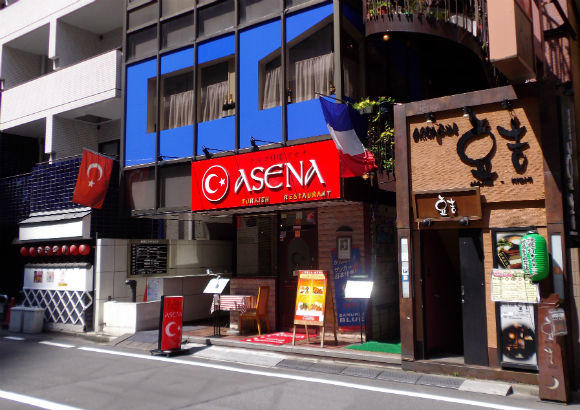 The lunch menu at Turkish restaurant Asena runs between 11:30am and 2pm; the most inexpensive offering, the “Today’s Lunch” set, costs 1,000yen and includes soup, bread, salad, butter rice, and Turkish tea. For 200yen more, order kebabs or Turkish meatballs, also served with an array of side dishes.

Most set lunches, however, occasionally served in-house but predominantly displayed and sold as take-out boxes, rarely cost over 500yen—I noticed some stands where you could get away with a substantial lunch for 390yen. Take your businessperson’s lunch to Hinokicho Park or the plaza at the Kokusai Shin-Akasaka Building. Hopefully sans the 100-hour workweek.

Open with Maps
Written by: Mine Serizawa
Filed under: Eating & Drinking
Tags:
Sharing
Questions or comments about this article?
Start a thread on our community forum
Ask our local experts about Tokyo