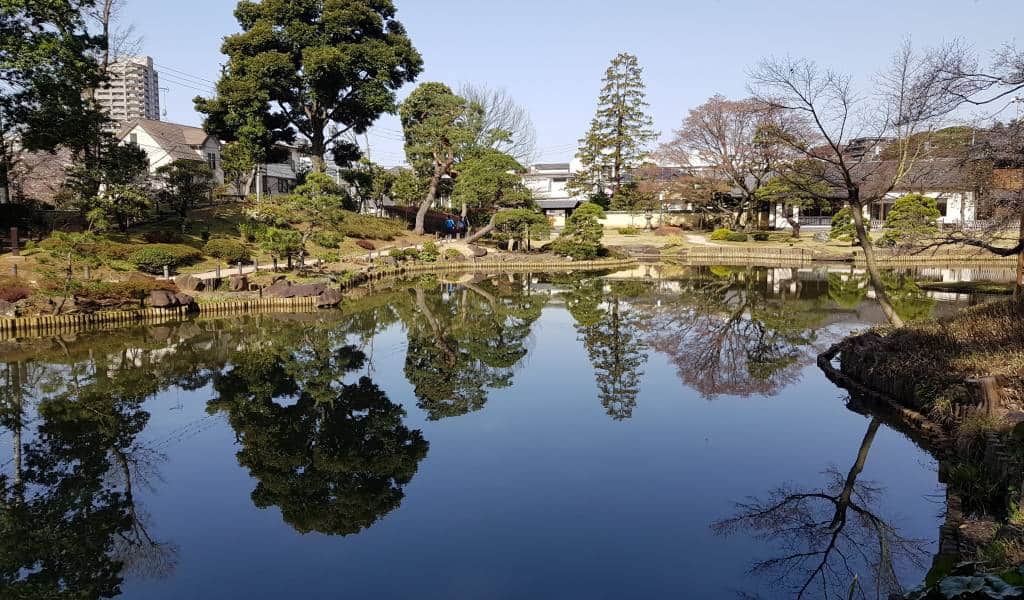 Once the suburban manor of the powerful Higo Hosokawa Clan of the feudal domain that is now modern-day Kumamoto, the gardens and residence have been been preserved and are now open to the public.

The main mansions of the feudal lords were located around the palace in central Tokyo—so the shogun could keep a close eye on them. In addition to the central city pad, each clan had a “lower mansion” where they could escape the hustle, bustle and politics of the palace.

The current villa only dates from the 1920s—replacing a much grander building from the Meiji period. This actually makes it a rather ancient structure by demolition-loving Tokyo standards. Although large by Japanese standards, the villa is rather modest. The most interesting thing about the house is the views that it affords over the garden. The ground floor tea room is a pleasant place to look out over the pond.

The garden itself is not to the standard of gardens like Rikugien or Kiyosumi Gardens, but it makes for a pleasant stroll. One unusual aspect is its setting on the steep slopes of Mejirodai hill. At the top of hill is the Eisei Bunko Museum—a museum containing art and historical artifacts.

Walking through the grounds, you can get to some other interesting sights in the Sekiguchi neighborhood including the Noma Memorial Museum, St. Mary’s Cathedral and Chinzanso Garden. Although the garden opens at 9am, the gate connecting to the Eisei Bunko Museum does not open until 10am.