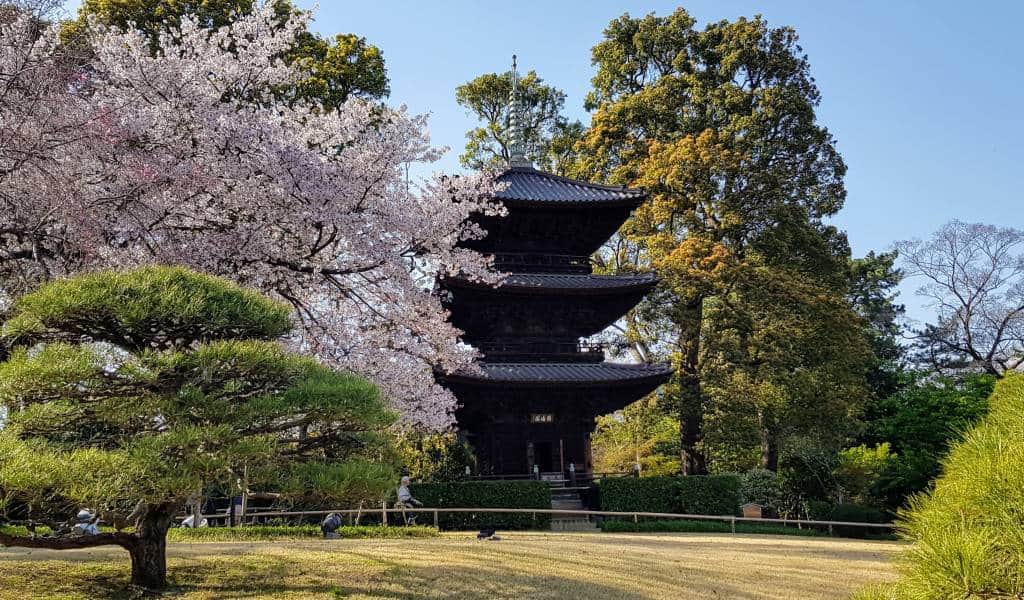 This traditional Japanese teien attached to the neighboring Hotel Chinzanso Tokyo, is one of the most spectacular gardens in Tokyo.

As far back as the 14th century, the hill on which Chinzanso is located was known as tsubakiyama – “camelia mountain”. In the late Edo period (from the 17th to 19th centuries) the area of the garden was the location of the suburban residence of the Kuroda clan, feudal rulers of what is now part of Niigata Prefecture. During the rapid modermisation of Japan in the Meiji Period in the late 19th century, the area was taken over by Yamagata Aritomo—an army general, politician and a prince under Japan’s peerage system. Yamagata built the Chinzanso garden, hiring Iwamoto Katsugoro—the preeminent garden designer of the period—to build the garden for him. After the Second World War, when the Japanese peerage systen was abolished and estates were seized, the garden was acquired by hotel company Fujita Kanko, which built a hotel adjacent to the garden. The modern hotel buildings date from 1989.

The garden itself is built around a valley that runs from the hotel building down to the banks of the Kanda river. Although (like most Japanese gardens) Chinzanso is designed to be enjoyed in each season, the most spectacular times to visit are in Spring for the cherry blossoms and in Fall for the autumn leaves. The garden stays true to its former name with a large variety of camelia from throughout Japan.

The garden is popular with bridal couples and for taking commemorative photos in bright kimono. Spring sees graduates from nearby Waseda University getting photos in their graduation kimono.

The three-storied pagoda was relocated to the garden from a temple in the mountains of Hiroshima in the 1920s by Prince Iwamoto’s heir. It is believed that it was constructed in the early 9th century. Illuminated by spotlights in the evening, the pagoda occupies the highest point in the garden.

The seven lucky gods are a Japanese Buddhist tradition that dates back to the 18th century. The garden is dotted with small stone statues of the gods. The idea is if you find them all, you will have nothing but good luck and riches. We didn’t find them all, so we can’t tell you if it works or not.

The closest stations are Edogawabashi on the Yurakucho Line and Waseda Station on the Tokyo Sakura Tram (Toden Arakawa Line). The garden is easily walkable from each. Rather than start from the hotel end, we recommend taking a stroll along the banks of the Kanda River and entering from the bottom gate—especially during cherry blossom season when the drab concrete channel of the river is transformed by the flowers.

For an English map pf the garden, ask at the Hotel reception.