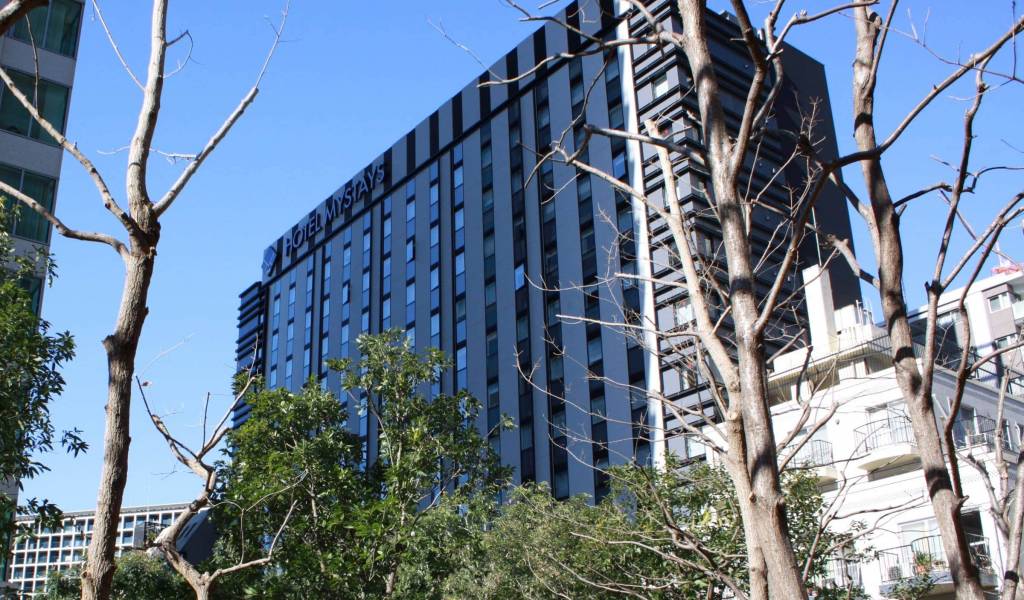 Just a few minutes walk from Akasaka Station, HOTEL MYSTAYS PREMIER Akasaka is a modern, conveniently located hotel in central Tokyo. MYSTAYS hotels are among the most booked by readers of Tokyo Cheapo.

The hotel is large with 327 rooms spread over 12 floors.

The hotel has free wi-fi, a well equipped (for a hotel) fitness center, a 7-11 convenience store and a laundromat. Restaurant Minoru is a cafe/restaurant on the ground floor that serves mainly western/Mediterranean dishes with lunch plates from ¥1,000.

There are nooks with a vending machine, ice machine and microwave on the 4th, 8th, and 11th floors.

MYSTAYS PREMIER Akasaka has a range of room types, from smaller twin rooms up to queen rooms. While an extra bed can be added for babies or children, the hotel is not really set up for families.

The rooms are very much average size for a hotel in Tokyo, which means they’ll feel quite small if you spend your first night in Tokyo at this hotel.

The double bed is a good size with ample pillows and plenty of space next to, and at the end of the bed.

There were six spare power outlets, including two right next to the bed. A USB charging cable is provided with multiple adaptors for different phones.

The aircon is effective and quiet, but its drying effect will turn you into a prune. The room is equipped with an air purifier/humidifier which helps. The window can also be opened, but not wide enough to jump out of or to drop objects onto passersby.

From our room, there wasn’t much of a view. However, the windows are clear (not opaque like some cheaper hotels) and as mentioned, can be opened for a little fresh city air.

As the hotel is relatively tall in the area, there should be some better city views from the upper floors on the west side of the hotel.

There are some comfy arm chairs in the lobby, but it’s more of a transient space for relaxing in while waiting for others or checking email before heading out.

There is a terrace with outdoor seating on the third floor, but this was closed on our visit.

MYSTAYS PREMIER Akasaka is well located for either business or sightseeing in Tokyo. Reaching major retail and entertainment centers like Shinjuku, Shibuya, and Ginza is relatively easy.

The hotel is only a 5 minute walk from Akasaka Station on the Chiyoda Line, and a similar distance to Tameikesannō Station, which is served by the Ginza, Namboku, and Marunouchi Lines. The hotel is at the top of a small hill, so trips to and from the station require just a little up and down walking.

As of writing this review, the Limousine Buses services which serve the major hotels throughout the area have not been restored, so your best option is to take the train. If you take the Narita Express to Tokyo Station, you can take the Marunouchi Line and then the Chiyoda Line to Akasaka Station. Alternatively you can catch a taxi for about ¥2,000. If taking the Keisei SkyLiner, you can switch to the Ginza Line at Ueno Station and alight at Tameikesannō Station. If you’re coming from Haneda Airport, take the Keikyū Main Line to Shinbashi Station, change to the Ginza Line, then leave the train at Tameikesannō Station.

Akasaka is a mixed residential and business neighborhood which is lively on weekdays and usually quiet on weekends. Around the station there are plenty of eating options — both cheap and higher end. If self catering, nearby super markets Yoshiike (just around the corner) and Maruetsu Petite (in the basement of Akasaka Sacas) have plenty of pre-made bento and meals.

Akasaka is a district that is well known for its dining options. The area between the hotel and nearby Akasaka Dōri avenue is particularly well known for Korean eateries.

For a wider range of cuisine, check out the nearby Akasaka Sacas complex which has a Belgian brasserie, noodle restaurants, and restaurants with cuisine from Spain, Italy, Portugal, China, Singapore, and of course Japan.

Hie Shrine and Hikawa Shrine are a couple of notable places each within five minutes of the hotel. Roppongi, with its museums, shopping, and nightlife is also within easy walking distance.

Breakfast at Minori on the first floor consisted of a selection of one of three pre-prepared boxed meals. The choice when we stayed was an omelette box with bread, omelette, mashed potato and salad, a rice bowl with chicken on rice, and a vegetable sandwich. Each was heated up in the Microwave.

The drink bar consisted of pots of hot coffee (nothing fancy), tea, milk, and some juices. The drink bar loses points for using plastic cups and straws. The music festival-like food in a box is also not a great way to start the day.

The restaurant itself is light and airy, surrounded by green and open for lunch and dinner. It’s on the first floor though, so it doesn’t have a view. If you want to start your day with a sense of where you are, Minori doesn’t deliver. Given the options in the neighbourhood the breakfast is probably only worth considering if you’re stuck here during a typhoon.

HOTEL MYSTAYS PREMIER Akasaka is a good place for single travellers or couples who want to spend most of the day exploring the city. The hotel isn’t really a place to just hang out, but with the convenience store downstairs, and access to so many subway lines, it’s a great place from which to embark on a mission of exploration.

We wouldn’t recommend the hotel for families.

Although there may be some kind of efforts that MYSTAYS is making towards sustainability, we were unable to find any.

Perhaps the best thing about MYSTAYS PREMIER Akasaka is the 7-Eleven in the basement. As a guest, you don’t even need to go outside to stock up on drinks and onigiri. The ATM — which accepts international credit cards — is also very handy if you’re arriving at the hotel without local cash.