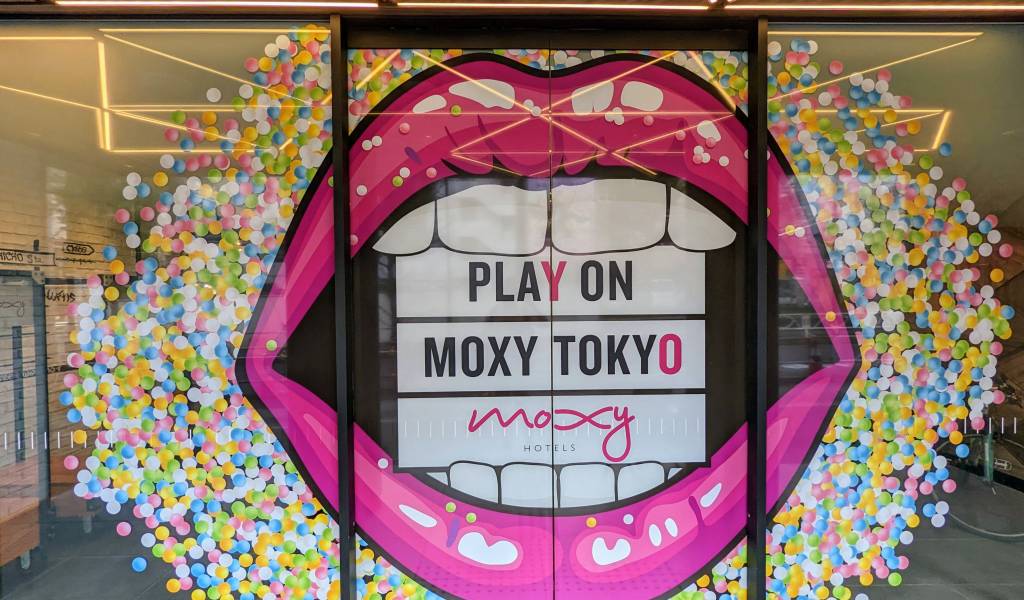 Located in the neighborhood of Kinshicho, Moxy is ideal for travelers looking for a relaxing place to hang out and do some remote work at the same time. Staff are friendly and helpful and the late check-out is a bonus.

Unlike most other hotel rooms, it doesn’t have a desk (although there is a fold-up table). This doesn’t matter though since there are so many working spaces on the ground floor. There’s also no fridge in the room, but refreshments are available at most hours from the bar downstairs.

As a modern hotel, there are ample places to plug-in and charge your gadgets, with four electrical outlets around the bed, and two USB outlets.

The staff at reception told us that the room was compact, but by Tokyo standards it was super roomy, with a high ceiling, which adds to the roominess.

With the relaxed, minimalist design, and a few quirky retro touches, the rooms are a relaxing place to be. You can just hangout in your room, but the shared area on the ground floor is the highlight, so it feels like a waste to stay holed up in your room.

Some of the upper floors might have a view towards Tokyo Skytree, but the majority of rooms have a view across a road into other buildings.

From the design, decor, and bright graphics of the hotel, it’s obvious that Moxy is intended to be a fun, social experience. It doesn’t look like it’s a purpose built hotel though. It would seem that Moxy was originally an office building that has been thoroughly converted.

The hotel has a well equipped gym (which you need to book at the front desk), laundry facilities, and vending machines.

MOXY touts that you can use their app as a room or elevator key. Our experience with the app was mixed. Sometimes it was immediate, sometimes it took a few tries, and other times we completely gave up and used the key card instead. When you’re sharing an elevator and the app isn’t working, it’s much easier to just whip out your card key.

Besides the bar and restaurant on the ground floor, there are no other public spaces. But the ground floor space is huge and varied, with lots of different zones. So if you get bored, you can just move from the bar to the library, or play some pool on the tiny pool table.

How is the location?

The hotel is a 5 minute walk from Kinshicho Station, which is a major interchange station in Eastern Tokyo with easy access to Tokyo and Shinjuku Stations.

Lots of popular sightseeing areas — like Asakusa, Ueno, Akihabara, and Ryogoku — are accessible within a few minutes by public transport. If you’re not afraid of walking, you can get Ryogoku and Asakusa in about 30 to 40 minutes, while Ueno and Akihabara can be reached in about one hour.

The Chūō-Sōbu Line provides quick access to Tokyo, and Shinjuku, which are two of the city’s biggest rail hubs. The Hanzomon Line provides access to central Tokyo locales like Kudanshita and Otemachi, as well as Omotesando and Shibuya in the southwest of the city.

With quick access to Kinshicho from Tokyo Station via the Chūō-Sōbu Line, you can get to Moxy in 20 minutes after alighting from the Narita Express. It’s a little less convenient if coming from Haneda Airport, the quickest route is to board the Keikyu Line to Shinagawa, and then switch to the Yokosuka/Sōbu Line train bound for Chiba. The journey from Haneda to the hotel should take about 50 minutes.

Kinshicho is a nightlife area, so (especially on a Friday night) there is plenty of noise from the surrounding streets — from over-amplified drunken karaoke to the occasional raucous scream of laughter. The staff offer earplugs if this is an issue, although this writer had a comfortable sleep even with the occasional bit of noise drifting in.

If you think this might be an issue, you might want to ask for a higher level room or consider a hotel in a quieter area.

Besides night life options, Kinshicho is a major interchange station, so there is lots of everything — from convenience stores, to pharmacies, to cafes.

As a night life area, there is an enormous number of izakaya offering usual Japanese pub fare. The large retail complexes adjacent to the station such as Termina (on the south side) and Arcakit (on the north side) are filled with good value restaurants, bars, cafes, and sushi joints. However, we recommend exploring the backstreets and alleys for the most interesting spots.

There aren’t many points of interest close to the hotel, but just wandering the slightly seedy streets at night is an experience. There are good views of Tokyo Skytree from Kinshicho, especially from north of the station.

For Breakfast, there were five options. Breakfast curry for ¥600, or ¥900 with a set, Avocado cheese toast for ¥500 or ¥800 with a set, Japanese breakfast, or Western Breakfast for ¥1,300 which comes with a drink and access to the small buffet which has yoghurt, natto, bananas, and some cereal.

I went for the western breakfast. It contained sausages and bacon, which I don’t eat, so the staff agreed to remove them without a fuss. It seemed that they replaced the extra space with more potatoes and egg!

There is a choice of hot/iced coffee, Caffe latte, and cappuccino, but they’re from a push button coffee maker so lower your expectations. The staff were kind enough to give me a refill.

Is the breakfast better than a nearby breakfast set? If you like plenty of volume, then you’ll probably be happy. Overall though, this is a western breakfast designed for Japanese guests, which isn’t surprising as we visited before the borders are open. Some grainier breads would improve it quite a bit.

If you’re after less volume, then the avocado cheese toast or a McDonald’s breakfast might be better value.

MOXY is ideal for people traveling by themselves or in a couple. If you are traveling in a family group, then the location, noise and minimal in-room facilities might be an issue.

As mentioned, the co-working areas with electrical outlets on the ground floor is outstanding, so if you need to keep in touch with the office during your stay, then MOXY is ideal.

Tips and tricks to have the best stay

If you sign up for Marriott membership when you book your stay, you get a lower rate, as well as free un-limited soft drinks from the bar for the period of your stay.

Another bonus of the large coworking area on the ground floor is that there’s no pressure to wait until check-in time or immediately clear out from the hotel on check-out. So if you’ve got work to do, you can check-out at midday then hang out in the coworking space until you’ve done whatever work you needed to get done.