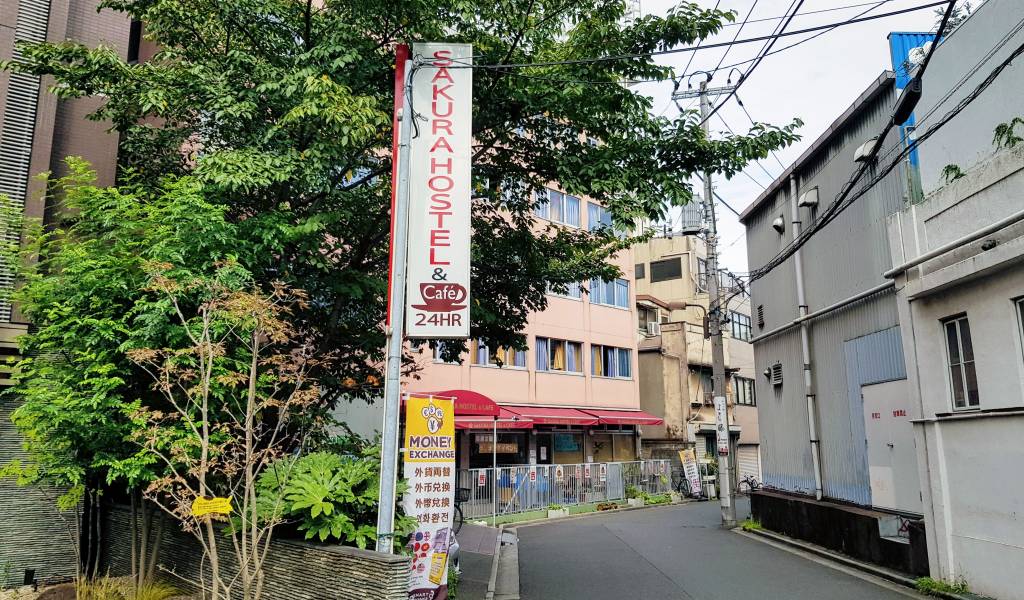 Although seeking accommodation in Japan has its hair-raising aspects (e.g. being stuffed headfirst to thaw like a frozen turkey in the “rooms” at capsule hotels), its associations tend towards luxury, from the soft-focus glamor of the Park Hyatt—we blame you, Sofia Coppola—to the traditional ryokan, where the real horrorshow begins with the bill.

Stamped with their own brand of the unorthodox, hostels are generally preferable to capsule hotels for the cheap and sociable traveler. And the claustrophobic one. In my experience hosteling is unparalleled for affording decent access to cities wherein that privilege usually carries a much higher price tag (Tokyo, Rome, Washington D.C., to name a few); and comes with a built-in sense of ragged camaraderie, of the desire for a maximum allocation of experience.

Sakura Hostel is one of the many hostels in the Asakusa area, and it is perhaps the one that comes closest to approximating the amenities of a hotel. Impeccably cherry-blossom-pink without, and designed in concrete and clear-hued wood within, its thirty rooms can accommodate 160 travelers who run the gamut from that family of four extracting their luggage from the communal storage space to the young Anglo-Swede debriefing in Tokyo before he works his way down the peninsulas. The reception area is decamped with travelers exchanging advice, using the free wi-fi, browsing the ‘free items’ box or the bookshelf with English novels, manga, travel guides, and city maps.

Laundry facilities, a communal kitchen, and a small restaurant also occupy the reception. All-you-can-eat breakfast is 315yen; meals (curry and rice, spaghetti, pizza) are 300-500yen, and coffee and espresso, 150yen. Use of the washers and dryers is free, with a 50yen charge for detergent; the same goes for hair dryers, irons, extra blankets, and the use of DVDs and video games.

I was shown a tour of the hostel by eminently helpful reception staff, including a look into four-bed and six-bed private rooms. Clean and spacious, they would confound even the most squeamish traveler conception of the hostel with its mildew décor and dubious bedding and flea homesteaders. The view from the upper floors reveals an anachronistic skyline—the roof of the Senso-ji temple and the suggestion of spinning gondolas at the adjacent Hanayashiki amusement park, with the Tokyo Skytree rising from the opposite bank of the Sumida-gawa.

The cost of six- and eight-bed private rooms comes to roughly ¥3,000 per person, as do beds in the all-female, all-male, or mixed dormitory rooms; the four-bed private rooms are slightly more expensive. Note that this is slightly more expensive than at other hostels in the area, where it’s possible to find accommodation from ¥2,200, or even ¥1,600 up. The trade-off (and there is one, naturally) might be found in the hostel’s upkeep and facilities, and its more family-oriented feeling—a kind of resort among hostels, if you will.

The pricier Sakura Hotel variation has locations in Ikebukuro, Hatagaya, and Jimbocho, and the “monthly stay” Sakura House is located in Shinjuku.