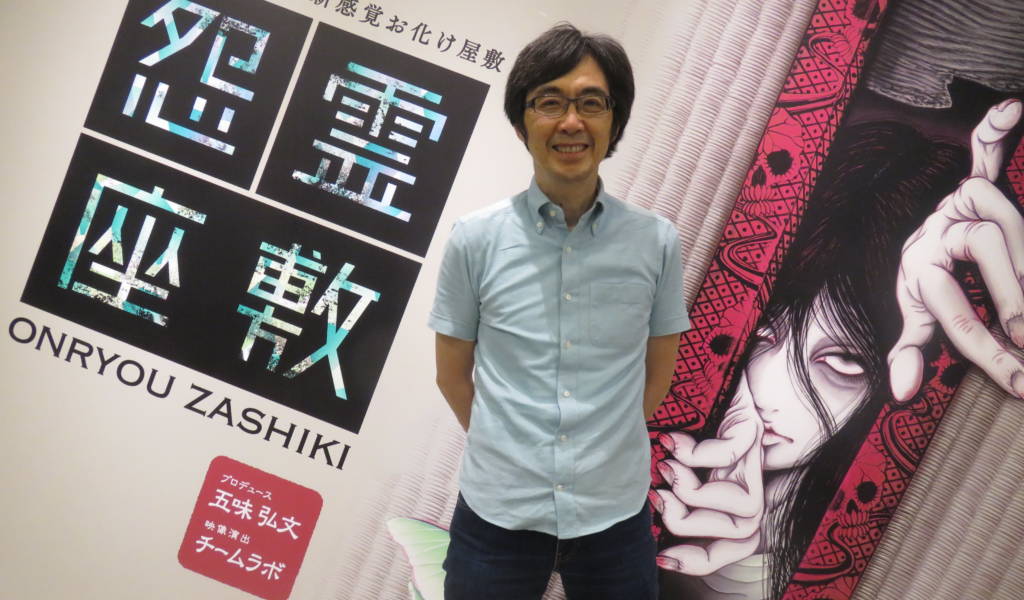 When it comes to Japanese horror, Ring, Ju-On: The Grudge, and manga artists Junji Ito and Kazuo Umezu come to mind—to name but a few. But probably lesser-known to non-Japanese horror enthusiasts is Hirofumi Gomi, Japan’s leading producer of haunted house attractions.

Gomi is someone worth knowing if you’re into Japanese horror, as he revolutionized the haunted house attraction in Japan. Before he kick-started his career in 1992, Japanese haunted houses were seen as kids’ entertainment—the kind you’d see at a school festival, with a few jump scares courtesy of crude dummies.

But Gomi changed the game, starting with the use of convincing scare actors. Then, in 1996, while conceptualizing his famous attraction, Baby in Hell, he came up with his magic formula: audience participation. By giving his haunted houses a backstory and a mission for visitors, be it safely delivering a baby to her mother or binding a vengeful spirit with sacred rope, he transformed the Japanese haunted house into a sophisticated, immersive experience that grown-ups can also enjoy.

To this day, Gomi has shown no signs of losing his creative touch. Prolific as ever, he has created 60 to 70 haunted house attractions (as of this writing), including a collaboration with Junji Ito and a Ju-On-themed attraction. While his haunted houses have been limited-time attractions (usually just for the summer), a permanent attraction, Onryou Zashiki, opened at Tokyo Dome City in April 2018.

I had the honor of sitting down for a few words with the haunted house master himself. Read on to know more about how his unlikely career started, and stay tuned for our article on Onryou Zashiki and other haunted house attractions in and near Tokyo.

How did your career as a haunted house producer start?

It’s certainly not something that I deliberately sought out or aspired to become. It’s not like such an industry or position ever existed! Rather, one thing led to another. I was working in theater and doing part-time jobs on the side, one of which was for Luna Park, Tokyo Dome’s summer attraction in 1992. I was asked to come up with a haunted house, and I thought, “Why not make haunted houses more adult-oriented?” The attraction was a success. Since then, Tokyo Dome has asked me to produce their annual summer haunted house.

Aside from classic Japanese ghosts, from where else do you draw inspiration?

I take inspiration from everyday scenarios in daily life—for instance, by observing people on the train. I also look into folklore, including regional lore. There’s this obscure tradition called gokuraku-nawa (“rope of paradise”), which involves tying a corpse to prevent it from coming back to life. That’s the inspiration behind this year’s summer-only mission—to tie the ghost up—at Onryou Zashiki.

What sets Japanese haunted houses apart from Western ones?

I’ve never experienced a Western horror house, but my impression is that they tend to go heavy on gore and violence. They also have more variety in that they feature monsters, zombies, serial killers, and more. In contrast, Japanese haunted houses typically feature ghosts and scare you through a creeping fear that slowly builds up as you go along.

Ideally, it should be both scary and fun. If it’s too scary, people might be discouraged to try it. But if it’s all just fun, it wouldn’t be scary!

What are the challenges and/or difficulties involved in creating haunted houses?

The fundamental challenge for me is figuring out how to give visitors freedom while aiming for their experience to align with my vision. I’d like visitors to feel like that they can explore the attraction in their own way, to an extent. But at the same time, I’d also like my attractions to have a certain flow. Striking this balance is difficult, but it’s also the most interesting part.

What’s the most enjoyable part about creating haunted houses?

Observing visitors’ reactions makes me happiest. Just like with theater, a haunted house is a performance that the audience can react to, but it’s also different in that it’s interactive. The audience is part of the performance, and the experience can draw out raw, direct reactions from people right then and there.

Have you ever personally experienced and/or heard stories of paranormal activity at your attractions?

I haven’t, and to my knowledge, no one’s ever experienced anything strange—no hauntings or curses. However, I guess I have my own onnen (an important concept in Japanese horror—the idea that some emotions are so strong that they can take on a life of their own, e.g. becoming a curse that transcends death), but not in a negative sense. I think my will is bound to Tokyo Dome somehow, because, aside from us working together since 1992, my first haunted house was at there, only for one of my attractions to be built on that exact same spot much later.

You’ve created numerous haunted house attractions. Do you still have any dream projects at this point?

I’d like to create a proper haunted house out of Yotsuya Kaidan. I’d like to recreate the ambiance of the Edo era and depict iconic scenes such as Oiwa combing her hair.

Author’s note: Yotsuya Kaidan is a classic Japanese ghost story featuring Oiwa, a ghost who takes revenge on her husband and his new wife, both of whom conspired to poison her. The backstory behind Onryou Zashiki bears similarities to this tale. Also, the figure of onryo —vengeful, usually female, ghosts—like Oiwa formed the basis of the stringy-haired female ghost that’s a staple of Japanese horror.

What about dream collaborations?

It’s a long shot, and I’m embarrassed to say this because I might not be up to par, but if I ever had the chance, I’d love to collaborate with [South Korean director] Bong Joon-Ho (Okja; The Host) and Stephen King. I’m a huge fan of their works. The Host (the 2006 South Korean film; not the 2013 Hollywood one) was an enjoyable monster movie, and The Shining is one of my favorite novels and movies.

In the future, would you want to create haunted houses not based on Japanese horror?

If I were to collaborate with a non-Japanese, of course it would be great to share and exchange cultures. But if it were just me, I don’t think there’s any point for me to create attractions based on another culture’s idea of horror, because I wouldn’t be able to depict it well. Going international would be nice—I once created a Japanese haunted house attraction for Indonesian participants to experience—but it’d be safer to stick to what I know and introduce Japanese haunted houses to international audiences.

For more of Gomi’s creations, try the Haunted Manor escape room in Asakusa.

Written by: Tiffany
Filed under: Editorial
Tags:
Sharing
Questions or comments about this article?
Start a thread on our community forum
Ask our local experts about Tokyo