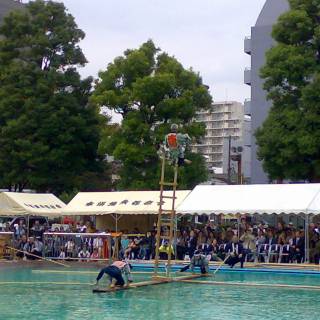 One of the slightly more interesting autumn festivals each year is the Koto Ward Citizens Festival Central Festival at Kiba Park in mid-October.

Originally, the entirety of Kiba Park was taken up by a giant log pond for supplying lumber to Edo. This festival offers a glimpse of some of this heritage with the opportunity to see ‘Kaku Nori’—a form of entertainment developed during the Edo era in which performers balance on floating semi-milled logs. While similar to log rolling, there is a lot more emphasis on balance and tricks—including balancing on top of ladders and boxes placed on the logs. The schedule will be released soon – be sure to check for the log rolling, which usually takes place early-ish on the Sunday morning.

The closest stations to Kiba Park are Kiba on the Tokyo Metro Tozai Line and Kiyosumishirakawa Station on the Toei Oedo and Hanzomon Lines.