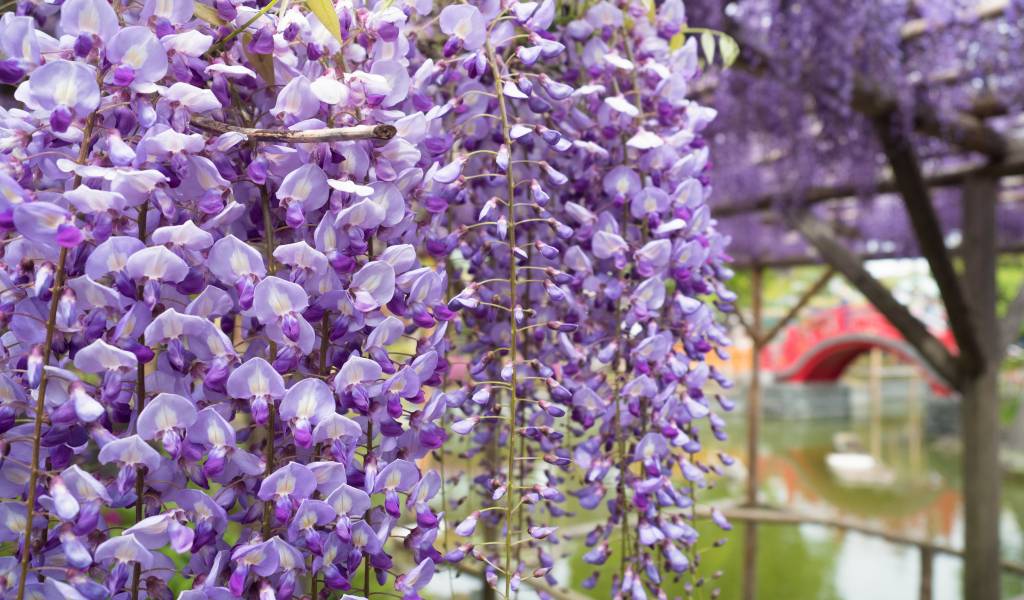 Pic: iStock.com/y-studio
Sharing
We are yet to confirm the dates and details of this event.

Kameido Tenjin Shrine has been associated with wisteria since its founding in the mid-17th century. According to the shrine, its inaugural head priest knew that the damp soil of the shrine grounds would be perfect for the flowering vine.

With over 100 plants, Kameido Tenjin Shrine remains the best place in Tokyo to see wisteria — fuji in Japanese — in bloom. And within the shrine, the most famous view is of the vermillion drum bridge with wisteria blossoms in the foreground. It’s a scene that has been recorded in a number of ukiyo-e, most famously by Hiroshige in his 100 Famous Views of Tokyo series.

During the annual Kameido Tenjin Wisteria Festival, the wisteria is illuminated after dusk until 10pm. There are also usually food stalls and events, like tea ceremonies, taiko drummming, and ikebana displays. Though it is unclear if that will happen this year, due to the ongoing pandemic.

Although the festival dates are fixed, the wisteria doesn’t always play along. On warm years (think when the cherry blossoms bloom in March) the flowering may be all but over by the start of May. If it’s a cooler year, the blooms may be a bit sparse at the beginning of the festival.

Note that the festival can get very crowded. Try to go on a weekday if possible.

Love wisteria? There is even more wisteria on display at the Great Wisteria Festival at Ashikaga Flower Park in Tochigi Prefecture.