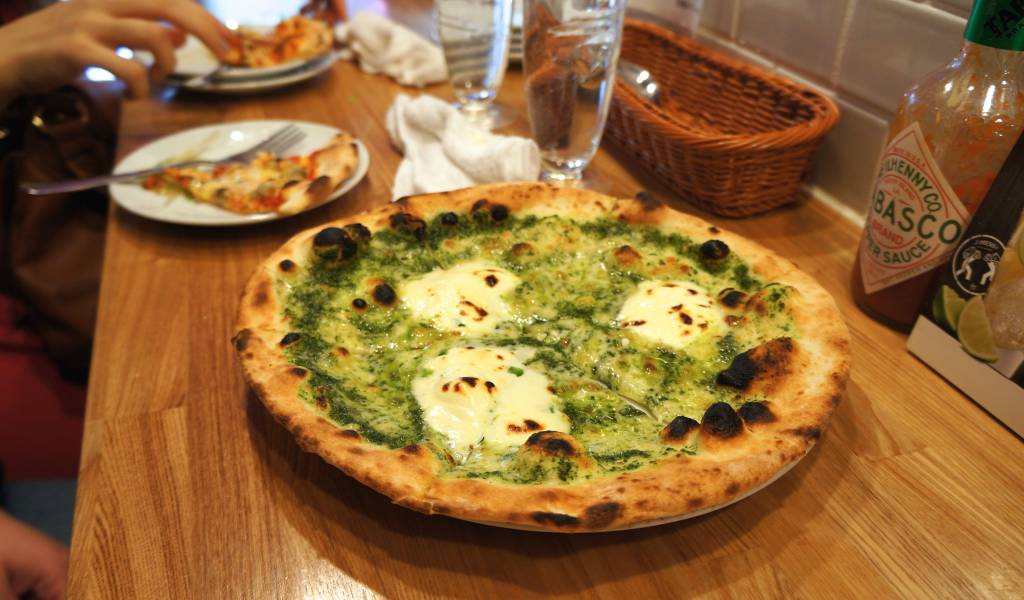 ‘There is love in the world,’ announces a sign on the front door of Don Pizza. Well, that certainly rings true if the world you are talking about has crusty pizzas for 500 yen a piece, cold beers, and upbeat tracks on constant rotation.

Don Pizza is a recent and welcome addition to the effortlessly quirky district of Shimokitazawa in Setagaya ward, having only been opened in October 2014. Yet within the span of four months, Don Pizza has begun to attract a dedicated following eager to tuck into its Neapolitan-style cheap pizza while enjoying the cheerful banter of its wait staff. It’s a place to kick back and rest one’s feet before going out to do some further vintage shopping in Shimokitazawa’s many alleys. But you might have trouble tearing yourself away from the good-time vibes and mouth-watering smells of melted cheese and pizza crust infusing the air around you.

It’s the first day of February when we visit Don Pizza; the sky is a dazzling blue after a week of thoroughly bitter weather. Walking into the restaurant, we’re caught by the charming layout of its interior. From the outside, Don Pizza’s appearance is nothing special, with its menu tattooed on the front windows and a generic arrangement of wine bottles at its feet. Yet inside, a beech counter wraps itself invitingly around the kitchen and bar, while the maroon ceiling gives a pleasing pop of colour to this compact space.

Restaurants in Tokyo often offer their customers a cost-effective lunch set, the payoff being that one can only choose from a select number of options derived from the larger main menu. It’s the same system at Don Pizza, where for 800 yen customers can order from a limited menu a pizza, salad and drink. Nonetheless, customers get to choose between eight different types of pizza, and there is no additional charge if you ask for an alcoholic beverage.

The pizza toppings at Don Pizza are both tried and true (such as the margherita and anchovy and black olive) and faintly experimental (like the cod roe and potato pizza). Not being one to fix something when it ain’t broke, I go for the salami and bell pepper pizza. My dining buddies choose the basil and mascarpone and the seafood and tomato pizzas respectively.

The Proof Is in the Pizza

The basil and mascarpone pizza comes out to us. The crust looks faithful to the Neapolitan style of having a thin and pliant base, yet puffy and nicely charred at its edges. The basil has a subtle fragrance that allows the main player, the decadently creamy and thick mascarpone, to shine. It’s a simple but well-conceived topping, proving that in some cases having less, rather than more, heaped on top of your pizza can be to your advantage.

The salami and bell pepper pizza likewise did not disappoint. Despite being light on the salami, the pizza was packed with lots of flavour. Spicy and salty, salami always pairs perfectly with the bitterness of roasted bell peppers, as the folks at Don Pizza realise.

A city that has long reached saturation point for restaurants and cafés, Tokyo is not in desperate need of another pizzeria. However, finding cheap, but also generously sized and delicious pizza, is something harder to come by.  Don Pizza is a genuine asset to the spirited district of Shimokitazawa, being a great option for Cheapos who want inexpensive food, yet are unwilling to sacrifice on taste.