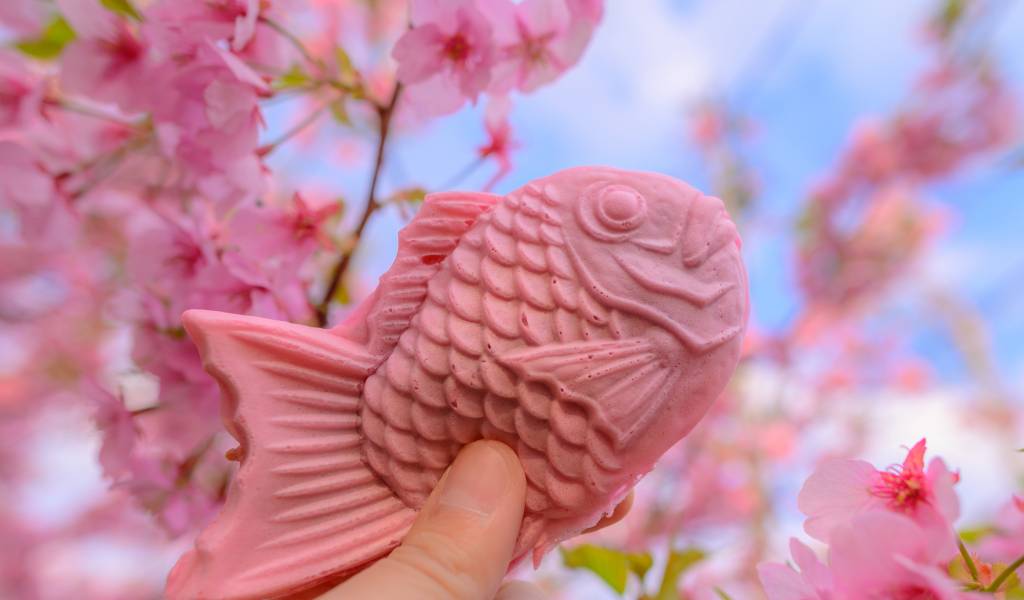 Eating with the Seasons: 8 Japanese Spring Foods to Try

Nicer weather is right around the corner, and with it comes a unique list of Japanese spring foods. If you’re looking to eat seasonally in Japan, there are plenty of delicious treats to try!

While the plum blossoms fade and the cherry blossoms begin budding, spring in Japan is a welcome change after the bitter cold of winter. While it is always a great season for produce around the world, there are some specific foods that take Japanese restaurants, kitchens and picnic blankets by storm in spring. Whether you’re enjoying snacks and drinks under the trees, cooking at home or checking out the specials board at your local restaurant, it’s always nice to try something fresh, knowing it’s at its best. From traditional savory dishes like bamboo shoots in your tempura to fresh strawberries wrapped in mochi—there are enough mouth-watering dishes to get you planning your own spring feast!

Plum blossoms are the first sign of spring in Japan and you’ll soon see plum-flavored treats everywhere you look. Although most are available throughout the year, like umeboshi (the very tart pickled plums) or umeshu (the plum wine), there will be chips flavored with pickled plum, seasonal chuhai and much more. These are not to everyone’s taste but can be fun to have at picnics and pass around as they are often very sour. Also, the umeboshi are considered a great hangover cure, along with a banana and a bottle of Pocari Sweat, so keep that in mind if you think your hanami party might get out of hand.

During spring though, you’ll find some fresher plum products at festivals and in department stores or supermarkets, there are jams, syrups and dried plums to take home! If you want to make your own umeshu, you need about 1kg plums,  500g-1kg sugar and 1.8 – 2 litres of shochu. Stick it all in a large airtight bottle, leave it in a dark place for a minimum of three but preferably more than six months, and enjoy!

There has to be some cherry blossom involved in this list, and while there are plenty of sakura frappucinos to be considered, there are some more traditional options too. Although available throughout the year, sakura mochi are a special treat to be eaten for Hinamatsuri (Girls Day) on March 3rd but are popular throughout spring, and often appear at hanami picnics.

A type of wagashi, the traditional Japanese sweet is made of pink-colored mochi stuffed with red-bean paste and wrapped in a pickled sakura leaf. They are one of the most easily recognized wagashi and you’ll have no trouble finding them at festival stalls, local shops and convenience stores.

The inspiration for the delicious treat of taiyaki (a sweet waffle fish filled with red-bean paste), tai is seabream that spawns in May. That means they are at their heaviest and fattiest in spring, so you’ll see them popping up at your fish stalls and on the nearest sushi conveyor belts. Aside from being fatty and delicious, the tai have an auspicious role at this time of year as well. The name tai forms part of the word medetai which means lucky, and this leads to it being a popular dish for new students and employees in April, as this the start of the school year and the beginning of the employment cycle. You can try regular tai as sushi or grilled as a whole fish, and it is best kept simple—so you can try it at home or out and about.

You may well have been eating this without realizing as in spring it becomes pretty ubiquitous, without too much of a strong flavor. While most bamboo is toxic when fully grown, some varieties can be eaten during their sprout phase—often between March and May. The edible bamboo shoots are boiled to ensure the toxins are removed before eating and need to be cooked soon after picking to avoid developing a bitter flavor.

Takenoko gohan (bamboo rice) is one of the most popular dishes and it is also especially delicious as tempura. In supermarkets, you might see it pre-boiled and peeled, or in its natural root form; if you are keen to cook it yourself be sure to cook it thoroughly. If you think the gnarled root looks familiar, it might be that you recognize the small chocolate Takenoko no Sato which have no actual bamboo in them, but are definitely delicious!

These are small Japanese sand eels from the Kansai region, caught between February and March and loved across Japan, but especially in Hyogo. Caramelized with soy sauce, mirin, sugar and ginger, they are served as ikanago no kugi-ni, meaning “the nails that hit the spot”, reflecting both their appearance and deliciousness. If you’re looking to make your own, aim for fish that are about an inch long, usually around the end of February and beginning of March. They are usually eaten on top of rice and make a delicious sticky snack with drinks.

Another sweet treat, ichigo are strawberries, and daifuku are small round mochi stuffed with red-bean paste. They come together to form a relatively modern wagashi only available between winter and spring. The combination of chewy mochi, sweet red-bean paste and fresh, juicy strawberry is unique to this unassuming treat and definitely wins you over. You’ll have no trouble finding ichigo daifuku in sweet shops, convenience stores and supermarkets as well as at food stalls in parks and festivals during the season.

This leafy green is a staple throughout the year, but in spring it is sweeter, crisper and infinitely more delicious. Filled with more vitamins, they are smaller and softer than in other seasons and can be enjoyed raw with a simple dipping sauce. It’s a common otoshi (a small dish given at the start of a meal), but also a great side dish to fried meals like pork cutlets or kushikatsu and is common in izakaya. As cabbage is the main ingredient in okonomiyaki, you can make a spring green version and even add other seasonal greens like Japanese asparagus and spring onions.

As the coastal waters begin to warm with spring’s arrival, clams are fished out by the keen fishermen and children alike. One of the most versatile additions to meals, the bottleneck clams are fresh, sweet and affordable too. You might find them in your miso soup, steamed with spring onions or just fried in butter. A more unusual choice is to steam them in sake, which definitely provides an extra level of Japanese flavor when combined with mirin and spring onions. Keep an eye out at izakayas for this dish—it might be on the specials or seasonal boards too.

Ok, so it isn’t the most traditional of foods, but if you want to get two seasonal themes in one sweet hit, then this seasonal waffle-fish should be next on your list. Taiyaki are modeled after spring speciality tai (seabream), and are grilled (that’s the yaki part). Although they are usually filled with red-bean paste, there are versions with custard, chocolate and strawberry sometimes, but the best is sakura. A sweet, pink, scented custard, you may not be having any actual sakura, but some do have dried petals and cherry bits in too!