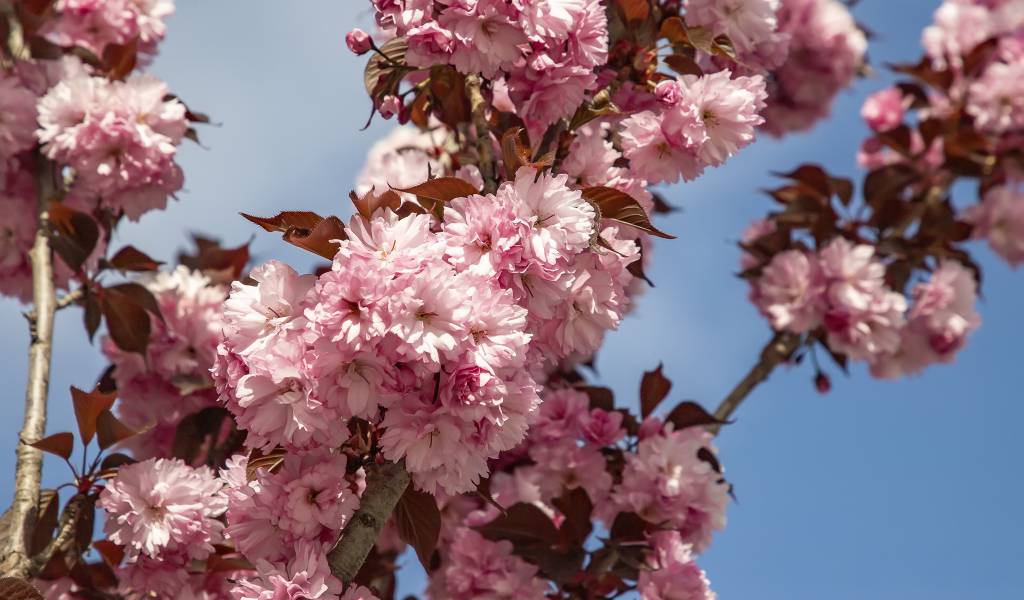 One important thing to know about cherry blossoms is that there are several kinds. According to the forecasts, cherry blossom season is quite short — from late March to early April. But that’s just the Somei Yoshino we’re talking about. Hanami forecasts usually don’t cover the early or late-blooming cherry trees, which are also beautiful.

The most common and iconic type of sakura is the five-petaled Somei Yoshino, which has white or pale pink blossoms. When meteorologists make cherry blossom forecasts, they’re referring to the Somei Yoshino variety. If you’re visiting Japan in mid- or late April, don’t despair — there should still be cherry blossoms for you to see in Tokyo, and that’s where the yaezakura comes in.

Yaezakura, which means multi-layered cherry blossom, is a catch-all term for cherry blossoms with more than five petals. Starting to bloom in mid- or late April, yaezakura have petals that range from light to dark pink. Because of the double layers of petals, they’re known as a symbol of strength, as compared to the delicate Somei Yoshino. (This also probably explains why they’re the type of cherry blossoms that are picked for preservation and processing.) They sometimes resemble peonies, so some people also call them botanzakura, botan being the Japanese word for peony.

Some examples of yaezakura varieties are:

If you want to learn more about the different kinds of cherry blossoms we have a whole guide on that.

Where to see late-blooming cherry trees in Tokyo

Here are some places in Tokyo where you can see yaezakura. Since the blooming of yaezakura isn’t as celebrated as that of the Somei Yoshino, don’t expect anything like festivals. Hanami parties for yaezakura aren’t all too common, either. But hey, they’re still cherry blossoms! They may not look exactly like the cherry blossoms you see in anime, movies, and dramas, but are they any less beautiful? We don’t think so!

One of Tokyo’s oldest hanami spots, Asukayama Park may be known more for Somei Yoshino trees, but look out for their yaezakura as well. These start blooming about a week after the cherry blossoms reach full bloom. They’ve got about 180 yaezakura trees.
Access: Oji Station (Namboku or Keihin Tohoku lines)

Aside from having Somei Yoshino trees, the vast Imperial Palace East Gardens are known to have the kanzan variety of yaezakura. Over here, they start blooming as early as mid-April.
Access: Otemachi (exit C13a), Takebashi (exit 1a), Nijubashimae (exit 6) or Tokyo Station (Marunouchi north exit)

With about 65 kinds of cherry blossoms and about 1100 cherry trees, Shinjuku Gyoen, one of Tokyo’s most famous hanami spots, has yaezakura as well. For starters, they’ve got about 190 trees with ichiyo blossoms.
Access: Shinjuku Station (east exit) or Shinjuku Gyoen-mae Station (Marunouchi Line)

This quiet garden is a breath of fresh air in Shiodome, primarily a business district. Its greenery is a pleasant sight amidst the tall buildings surrounding it, and it’s known for its yaezakura. Hamarikyu also has a tea house overlooking its pond, where you can appreciate nature in peace.
Access: Tsukijishijo or Shiodome stations

You can count on Ueno Park to have different kinds of cherry trees — it’s not one of Tokyo’s most popular hanami spots for nothing! Ichiyo and kanzan are just some of the yaezakura varieties that you can see here.
Access: Ueno Station

While its cherry blossom festival will be over by the time the yaezakura bloom, Chidorigafuchi has a few of the late-blooming cherry trees among its 170 trees. This stretch along the Imperial Palace moat gets extremely crowded at the peak of cherry blossom season, so if you want a quiet, peaceful stroll, go to Chidorigafuchi for some yaezakura, instead.
Access: Kudanshita Station

As the name implies, this shotengai (shopping street) in Setagaya is lined with cherry trees. There are about 200 mom-and-pop shops here, so if you want to support local businesses, this is one of the places to go — and then you can admire the cherry blossoms while taking a break from shopping.
Access: Sakura-Shinmachi Station (Tokyu Den-en-toshi Line)

If Sakura-shinmachi appeals to you, you might as well combine it with a visit to the relatively nearby Kinuta Park. This place doesn’t really do public transport, so it’s either a 20-minute walk to the northwest of Yoga Station, or a 30-minute walk to the west of Sakura-Shinmachi. Despite being a little out of the way, it’s a popular hanami spot which is famed for its late-blooming yaezakura.
Access: Yoga Station (Tokyu Den-en-toshi Line)

While we do our best to ensure it’s correct, information is subject to change. Post first published in March, 2015. Last updated March 2022.

Written by: Tiffany
Filed under: Outdoors and Nature | Things to do
Tags:
Sharing
Questions or comments about this article?
Start a thread on our community forum
Ask our local experts about Tokyo