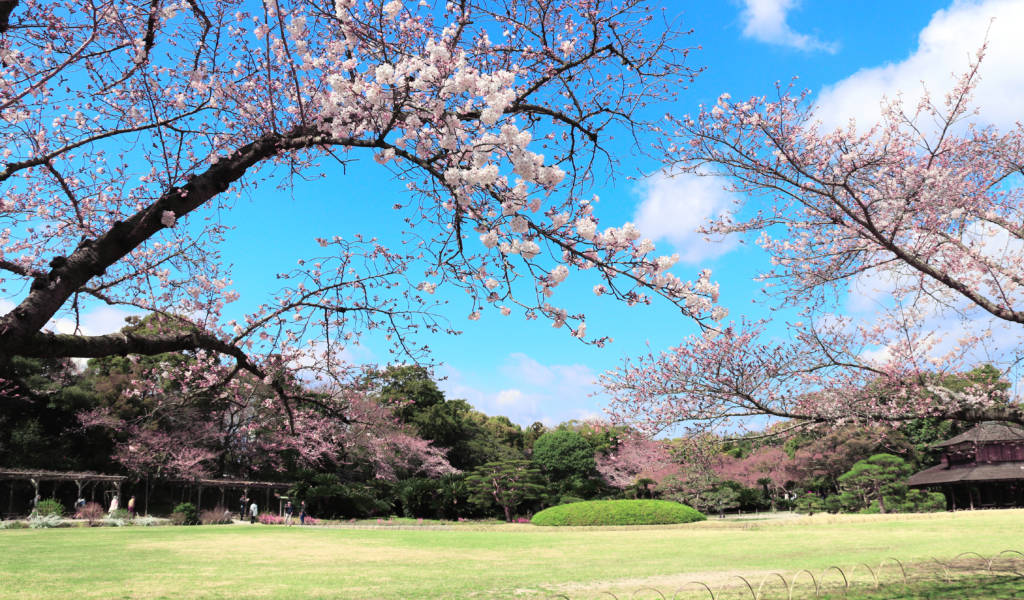 8 Cherry Blossom Varieties to See in Tokyo this Spring

When you’re sitting beneath a beautiful cherry blossom tree for a hanami (flower-viewing) picnic, you may look up and wonder what you’re actually under. With over 100 wild species of ornamental cherry trees and up to 600 cultivars in Japan, the variety is not always easy to decipher.

Some differences aren’t subtle; they forgo the typical five-petal pink national flower for a kaleidoscope of colors with double the petals. But with plum and peach blossoms also looking strangely familiar it might be time to reacquaint yourself with the different types of cherry blossoms and cherry-pick your favorite.

With all these species and types, from wild cherry blossoms to cultivated ones, we won’t blame you if terms and phrases get misconstrued. But let’s try to set the record straight.

How many petals do cherry blossoms have?

Of course, the answer to this question depends on the flower as cherry blossom petals can range anywhere from 5 to 100—in good weather. The umbrella term for these double-layered beauties is yaezakura and notable species include Kanzan, Yae-beni-shidare and Kikuzakura.

What is the difference between cultivars and wild species of cherry blossoms?

Cultivars are flowers or plants that have usually been bred by human intervention with two or more native species. They are created for their desired traits. For example, the most famous cherry blossom type, Somei Yoshino, is a combination of the wild Oshima cherry and Edo Higan.

When do cherry blossoms bloom in Tokyo?

The majority of cherry blossoms bloom in springtime, usually between March and April. Some exceptions may bloom as early as February (Kawazu cherry) or as late as early May (Kikuzakura). Some even give us two lives, one in spring and one in autumn, like the Fuyuzakura varieties.

The most well-known and abundant sakura trees in Japan are the Somei Yoshino, or Yoshino cherry. When you are scouring the web for the latest cherry blossom forecast, they are most certainly talking about the Yoshino variety.

Characterized by their five-a-piece baby-pink petals, they are paler than many other varieties and can appear almost white from a distance. Don’t grow too attached, however, as full bloom only lasts for around a week. A silver lining of this early demise is that the blossoms grow and shed without green leaves, leaving an untainted cotton-candy head. You could say they were crafted for the perfect hanami picnic party.

Said to originate from Somei Village, now in present-day Toshima in Tokyo, they have only been around since the 19th century.

Shidarezakura, meaning weeping cherry blossom in Japanese, is a cultivar, the offspring of the wild Edo Higan cherry tree, which also produces other wonderful droopy blossom varieties like the many-petalled Yae-beni-shidare.

Shidarezakura is its own variety but is also a term often used to encompass all vertically inclined ornamental cherry trees. Their branches sometimes differ in shape but both share the same quaint five-petalled pink flowers and early blooming time as Edo Higan varieties.

Their reputation precedes them, having been around for at least 1,000 years, with many sonnets and poems written about their grace traced back to the 12th century.

Green isn’t the color you tend to picture when thinking of sakura, but this specially bred variation has the correct lineage. Double-layered with over 10 petals, Gyoiko cherry blossoms unfurl grass-colored blossoms to reveal a contrasting red center at the peak of its life cycle.

Said to have been cultivated in the Edo Period (1603-1868), they are rare in Japan today. The name comes from the traditional color of female courtiers’ clothing which—you guessed it—was often green.

Not to be confused with the general term for mountain-dwelling sakura, Yamazakura (mountain cherry blossoms) were the inspiration behind many ancient Japanese poems. They are a primitive species that were around long before the cultivated versions of today, and up until the Meiji Period (1868-1912) was said to dominate Japan’s landscape.

One description doesn’t fit all as their wild nature produces colors from white to pink and the leaves coincide with their flowering. Generally, there are five petals with a slight white flush on the underside of the leaves.

Kanzan cherry blossoms’ impactful deep rose color, voluptuous blooms and hardiness in colder regions make them very popular both in Japan and abroad. They have copper-colored leaves with a whopping 30 to 50 petals.

They are another offspring, cultivar, of the Oshima cherry and the petals are often salted and used in sakura tea.

No, we are not talking about turmeric (also called ukon in Japanese) or the hangover cure, though the color isn’t that different. Resembling something close to a jam-filled donut, the blossoms are a creamy yellow with a not-as delicious red center.

It also derives from the Oshima cherry, a tree that obviously gets around a bit, and has between 10 to 18 petals. Its leaves grow in tandem with the blossoms and turn a spectacular red in fall.

The Kawazu cherry blossom is an early bloomer, coming out to play months before other sakura types and lasting twice as long. It is a hybrid of Oshima cherry and Taiwan cherry (Prunus campanulata), from the former it gets its large five-petalled flowers and from the latter its vivid color and speedy bloom.

The Kawazu Sakura Festival at the beginning of February brings in a large crowd of those wishing to catch their year’s first glimpse of cherry blossoms and rows upon rows line the riverbank—both people and trees.

They were only discovered in 1955 by chance when a man planted a log covered in weeds in his garden. It was originally thought to be a new species but was later discovered to be a hybrid.

This unique occurrence means you can see both the red-tinted colors of fall and the pink blossoms of spring at the same time. Perfect for those who can’t decide between their favorite seasons.

Struggling to figure out where to go this hanami season? Take a look at our mega guide of the best places to see cherry blossoms in Tokyo.

Written by: Alexandra Ziminski
Filed under: Outdoors and Nature | Things to do
Tags:
Sharing
Questions or comments about this article?
Start a thread on our community forum
Ask our local experts about Tokyo