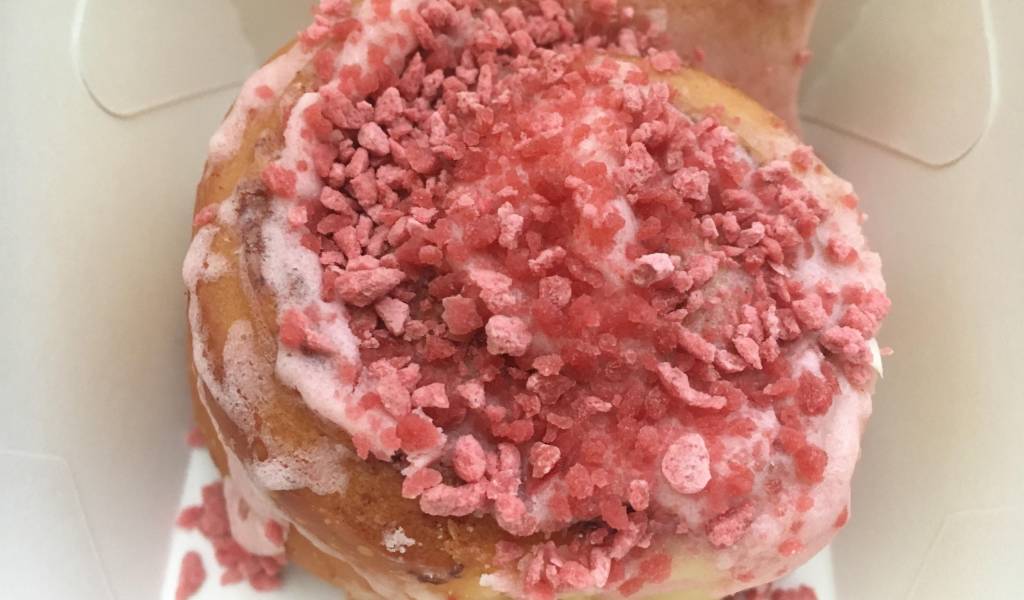 The weather’s getting warmer, which means that the much-awaited sakura (cherry blossom) season is drawing near—starting in late March! What with these tiny, beautiful pink blossoms being loved by locals and tourists alike, you can count on companies to cash in on the cherry blossom craze, leading to an abundance of sakura-themed merch, food and drink items in early spring.

Of course, some sakura-themed items such as accessories and beauty products can be found all year round. For this article, though, we’ll be focusing on the limited-edition and/or seasonal items, most of which are edible—for some reason, although no one can quite pinpoint what sakura actually tastes like. And no, just because they’re cherry blossoms doesn’t mean they’ll taste like cherries.

This author is specifically referring to Starbucks Japan’s sakura collection of tumblers, glasses, water bottles, and mugs, which is so popular that the items get sold out quite easily. The lineup has also gotten international attention—now, even neighboring countries like Taiwan and the Philippines have sakura-themed tumblers as well. For some reason, Starbucks has always released their sakura lineup (drinks, baked items, tumblers, etc.) before sakura season; they tend to go on sale from mid-February.

This year, sakura season will arrive just a tad earlier than usual and so did Starbucks’ cherry blossom–inspired tumblers and mugs. This year’s collection is called “Sakuraful”. No date is given until when the cherry blossom goods and drinks will be available, but typically as long as the sakura last, so until the end of March is our best guess.

The 2019 lineup went on sale in mid-February and (on paper, at least) are supposed to be in the market until mid-April, but based on our observations from the past few years, you’d be lucky to still see the tumblers on sale in April (hence Starbucks’s disclaimer of “until supplies run out”).

Suggested Activity
Make Traditional Japanese Sweets
Wagashi sweets have beautiful forms and colors which give us the sense of seasons. Learn the traditional flavors and preparation of classic Japanese sweets, with a 2-hour wagashi cooking class and tea ceremony in Tokyo. Get tips on making wagashi at home, then enjoy your treats in true Japanese style with a bowl of uji matcha green tea. 2-hour wagashi ...
Click here for details

Here’s a quick tip, though: the fact that these tumblers are limited edition, as well as their brand, adds to their appeal (not that the designs aren’t appealing; they are lovely)! But if you don’t care about getting a limited-edition tumbler from a famous brand, many souvenir shops have tumblers with pretty nice sakura designs (and they’re available all year long). Nana’s Green Tea has a sakura-themed tumbler as well.

Coffee? Tea? Or even… beer? Take your pick!

Along with its tumblers, Starbucks will have sakura-themed drinks as well. From February 15, you can order order a Sakuraful Frappuccino (¥630) or a Sakuraful Latte (¥464–¥594), both of which feature sakura flavor and topping.

Starbucks isn’t the only place to get your sakura drink fix; many other coffee shops, such as Cafe de Crie, will also have their own take on the sakura latte. Also, from February 16 to March 31, at the upscale Lindt Chocolat Cafe, with branches in Ginza, Omotesando, Shibuya, Jiyugaoka, Kichijoji, Tachikawa, and Kita-Senju, you can enjoy a White Chocolate Sakura iced drink (¥772 take-away or ¥1,388 in a glass).

None of those drinks contain coffee, so if you want your caffeine fix, go for Doutor’s Premium Roast Coffee Sakura, which goes on sale from March 14th. Smelling of sakura trees and mixed with sakura powder, it’s available as ground (200 grams for ¥980).

And for true cheapos, starting February 19th, you can find Lipton’s ready-to-drink Sakura Milk Tea in convenience stores and supermarkets across Japan for just ¥135.

You probably shouldn’t be surprised that there’s sakura booze too. Sankt Gallen Brewery created a beer made with cherry blossoms—prices start at ¥2,230 for three bottles.

Asahi Super Dry beer comes in cherry blossom–themed packaging to celebrate spring in February and March, although the flavor does not change. You can also find Suntory’s sakura cherry chu-hi in convenience stores and groceries and the momo to sakuranbo (peach and cherry) chuhai (alcoholic fruit cocktail) by Asahi should definitely be the drink of choice for your next hanami party.

Another interesting drink option is the cherry blossom–flavored energy drink by Raizin.

If you have a sweet tooth, you’re in luck, as there’s an abundance of sakura-themed food. You don’t even have to limit yourself to popular chains to get your fix of cherry blossom sweets; small, independent cafes might also have something of their own too!

Sakura cakes should be easy to find. You’ll see them at cafes, department stores, stalls, and so on. Starbucks, for one, always offers a sakura chiffon cake (¥410) to accompany its sakura-themed drinks. This year, they even have a new addition to their sakura lineup, a Sakuraful Milk Pudding for ¥320.

As for macarons, Lindt‘s got that covered—along with their drink, they’ll serve sakura macarons for ¥302 a piece. And while there have been no announcements as of this writing, Ladurée—which has a branch in Ginza and stalls in Mitsukoshi Ginza, Mitsukoshi Nihonbashi, Lumine Shinjuku, and Haneda Airport—has sold sakura macarons in the past.

If cupcakes are what you like, be on the lookout for LOLA’s Cupcakes. But if cinnamon rolls are your thing, stop by Cinnabon for its sakura Minibon (¥390) with sakura-flavored cream cheese frosting from March 1st to April 18th.

Don’t forget about ice cream! Parks with sakura festivals, more often than not, will have a stall where you can buy some soft-serve sakura ice cream. Some parks—Ueno, Inokashira, Yoyogi, and Hamarikyu, among others—are even taking that one step further, with the introduction of a sakura ice cream puff.

Convenience stores aren’t just sitting there and missing out on this opportunity to cash in on the sakura craze, either. Generally, Lawson stores seem to have the best selection. A personal favorite is the sakura daifuku, a cherry blossom–flavored rice cake filled with bean paste and wrapped in a cherry leaf. Other items include cherry blossom flavored cream puffs and dorayaki, a kind of traditional Japanese pancake sandwich with sweet filling.

Enough about Western sweets, though (yes, there’s more.) We haven’t even gotten to the traditional ones yet! For starters, sakura mochi is, well, mochi wrapped in a cherry blossom leaf, and sometimes garnished with a dried cherry blossom. Mochi is an umbrella term for different kinds of rice cakes, so there are several variations of sakura mochi, one of which is named domyouji after the flour that’s used to make it.

Check out wagashi (traditional sweets) shops too; they usually have very intricately designed sweets that not only taste good, but are also a sight to behold (so beautiful that you might not want to eat them even).

Lastly, for something more traditional, at an onigiri shop, you might see savory sakura onigiri with dried, pickled cherry blossoms as filling.

Ever admired cherry blossoms so much that you wished you could take some home with you? Well, thanks to 100-yen shops and flower shops, you can—just, obviously, not the real thing! One-hundred yen shops have already started rolling out their artificial sakura—branches with blossoms, wreaths, and even a packet filled with petals (perhaps for those who want to recreate anime scenes?) They can make for some nice (and really cheap) home decor.

For those of you that accept nothing short of the original, starting from about ¥400 to about ¥600, depending on the size, you can buy a real cherry blossom branch in your local supermarket. (Note to visitors to Japan: flying back home with flora is generally a no-no—double-check the restrictions on bringing foreign plants to your final destination.) Japanese plum blossom branches are also often available in February and get replaced by sakura come mid-March. Check the flower area to find them. Pick one that still has some closed buds on it and the branch will have flowers for up to two weeks.

Additionally, if you’re into sending snail mail, this is a great time to send sakura-themed greeting cards and postcards, and there should also be an abundance of sakura-themed stationery: stickers, washi tape, you name it.

The Japanese are visual creatures that pay a lot of attention to aesthetics. There will be cherry blossoms printed on a lot of packaging this season—but that doesn’t necessarily mean that there is any cherry blossom or cherry flavor inside! For example, the Asahi beer can adorned with sakura for purely decorative purposes mentioned above—the beer inside is the same old. This also goes for the tea in the picture below—the petals are only meant to get you in the hanami spirit but have no influence on the taste.

If you aren’t sure if something with actually taste like cherry blossoms look for the following Japanese characters: 桜 (sakura) is the kanji for cherry blossoms. The flavor is gentle and slightly salty by the way that goes surprisingly well with sweet things in general. さくらんぼ or 桜桃 (sakuranbo) means cherry and indicates, obviously, cherry flavor.

This article was last updated on March 13, 2019 by Mareike Dornhege

Written by: Tiffany
Filed under: Eating & Drinking | Shopping
Tags:
Sharing
Questions or comments about this article?
Start a thread on our community forum
Ask our local experts about Tokyo