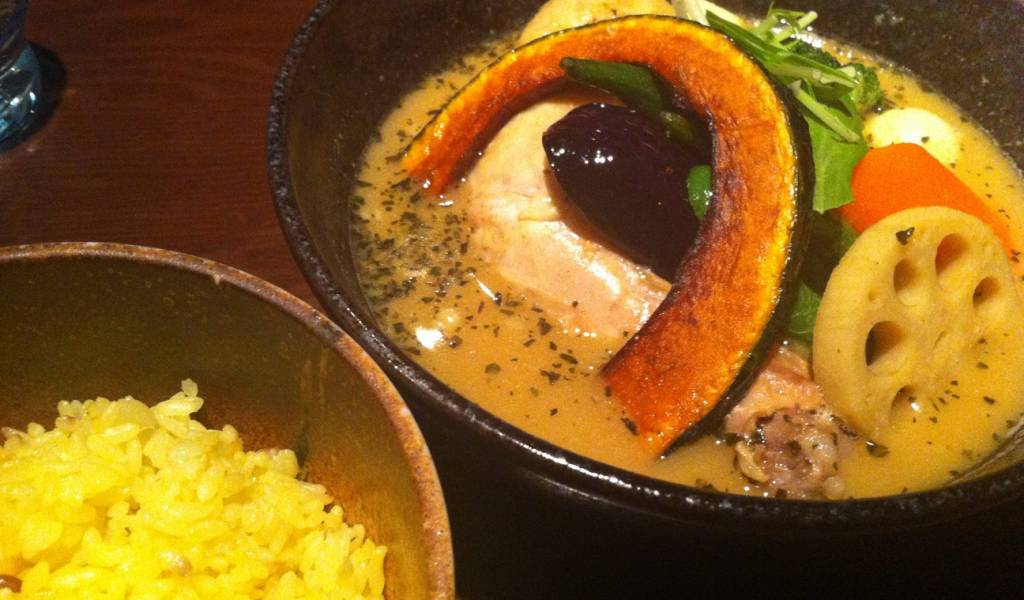 Leave it to Japan to adapt and rework foreign dishes to give them a new identity. As it implies, soup curry is a hybrid of the two dishes that comprise its name; it’s thin and watery for a curry, so it’s more like a spicy, curry-based soup with meat and vegetable toppings. Like typical curry, though, it’s served with rice. You can choose the spiciness level of your soup curry and, in some cases, the toppings as well. Because some soup curries aren’t made with meat, this meal can be quite vegan-friendly.

Although many soup curry restaurants have Indian-sounding names and ambiances, this is actually a Japanese dish. It originated in Sapporo, up north in Hokkaido, in the 1970s and gained popularity in the early 2000s, making it one of the many examples of yoshoku, or Japanized foreign dishes, albeit a more recent addition to the roster.

Dominica, which has a branch in Ginza and another in Nihonbashi, allows you to choose from these bases: original, which is made of a mix of chicken stock and pork bouillon; tomato; tonkotsu; and soy milk. The tonkotsu base is apparently unique to the Ginza branch. Dominica’s spiciness levels range from 0 (no spiciness) to 10 (extremely spicy), and, for toppings, you can choose from hamburg, eggs, pork, and cheese. Prices range from 1,000-1,200 yen.

Shanti has 4 branches in Tokyo: Ikebukuro (near Rikkyo University), Harajuku, Shibuya and Takadanobaba. Prices range from 970-2,000 yen (including add-ons). Although servings look slightly small, Shanti’s curries can be quite filling. They have an original base and, despite the Indian decor in most branches, a Saigon base, which is less spicy. Vegetarian options are also available. Spiciness levels range from 1-10, then, for some reason, the next levels are 15, 20, 25, 30, 35, and 40. Levels 30 and 35 come with funny warnings such as, “Just a little more, and you’ll become a hopeless failure of a human being” and “Make no mistake; this is bad for your body.” With no warning label for level 40, we can only assume its ultimate spiciness has been foreshadowed.

One of Sapporo’s top-rated soup curry restaurants, Cocoro takes pride in its tomato-and-basil base, which is said to be an iconic soup curry base. Its Tokyo branches are in the trendy neighborhoods of Kichijoji and Shimokitazawa. Prices start at 880 yen for a basic vegetable soup curry, to 1,500 yen if you want upgrades such as extra spiciness, drinks or desserts. Its bestseller is a vegetable-laden soup curry that is described as your day’s worth of vegetables, which may be of interest to health buffs. Its spiciness meter ranges from 0-100. And you thought Shanti’s levels were tough enough!

They‘re known for their generous portions of meat and vegetables, and they also serve lassi and chai, both of which complement soup curry quite well.  They also have a house special called Ebisu, which consists of prawns, scallops, oysters, and clams. Spiciness ranges from 1-10, plus 4 levels that are described to be ‘off the scale’. Expect to pay somewhere between 900-2,000 yen for a meal.

This oddball of a restaurant, located in Shimokitazawa, can’t seem to decide if it’s Indonesian, Southeast Asian in general, Nepali, or Indian, as its curry is largely based on Indonesia’s chicken soup, soto ayam, yet its ambiance is Indian. It also serves Nepalese dumplings called momo. Its describes its spiciness levels in pseudo-religious, even foreign, terms such as “awakening” (for those who can’t handle spiciness well) and raputa, which, they claim, will take you to a “world of mystic hotness”. There’s even a level so spicy that it’s not on the menu, and you have to sign a waiver before ordering it! Despite the identity crisis, Magic Spice does soup curry right, as its servings are flavorful and, even at the lowest level, its soup curries are still spicier than the usual. Keep in mind, though, that the spicier levels require more ingredients, and thus cost more.

Getting hungry? Click here for directions to Magic Spice.