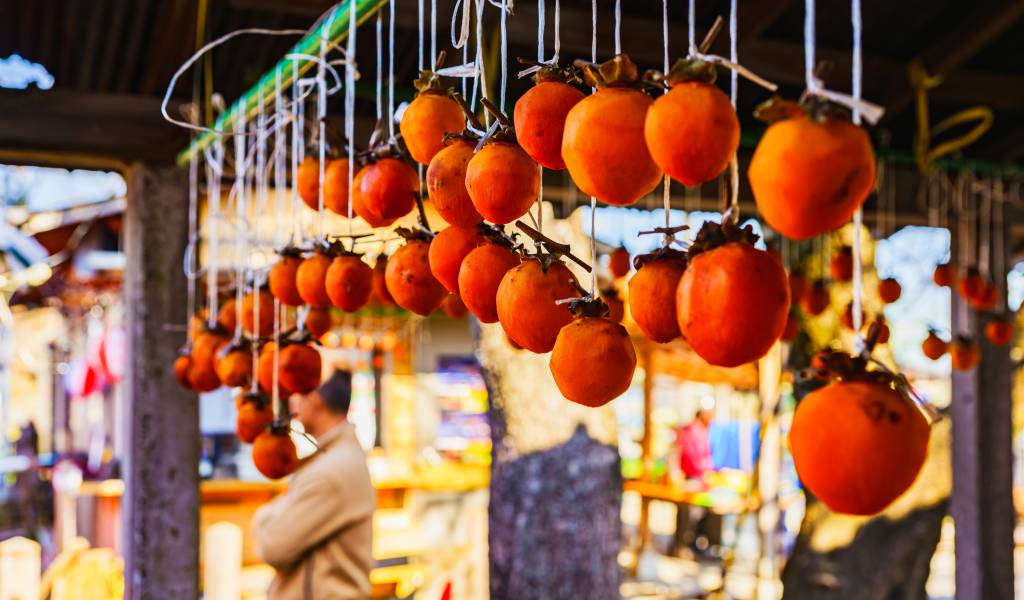 Eating with the Seasons: 9 Fall Foods to Try in Japan

Fall is the season for eating, according to a Japanese saying — and it’s not wrong. And with the sheer number of delicious Japanese fall foods, you’ll be spoilt for choice.

With nights getting slowly darker, temperatures dropping, and the leaves changing, there’s no denying the arrival of fall. For many of us who have been melting in the summer heat, it’s something to be celebrated. It’s practically impossible to comfort eat during the Japanese summer — even getting up for a tub of ice cream works up a sweat — but now that it’s fall you don’t have to worry about that anymore. You can sink back into those warming dishes and enjoy the comfort of hearty flavors.

So, without further ado, here are the top 9 Japanese fall foods to try.

Chestnut is a popular ingredient that shows up in both sweet and savory dishes. They can be found roasted whole, in the iconic dish kuri-gohan (rice steamed with chestnuts, so they cook together), or stuffed in a cake-like dumpling called kuri-manju.

With Kit Kats, Haagen Dazs and all the other brands that do seasonal goods, you won’t struggle to find chestnut this or that on the shelves this fall. At fancy sweets shops look for pastries with delicate piped lines of puréed chestnut. With sweets, the French word marron is often used rather than the Japanese word for chestnut, kuri (栗).

Where to find them: Any nice bakery or cake shop will have plenty of chestnut treats. Try traditional sweet shops, supermarkets, or festival stalls for the kuri-manju!

Sweet, soft, tomato-looking fruits you’ll see swinging from the trees or strung up to dry in rows, persimmons (kaki; 柿) are abundant in fall in Japan. There are actually two primary types of persimmon, the hachiya (astringent) and fuyu (non-astringent) varieties. The former are very tart until completely ripe and the latter can be eaten firm like an apple. In Japan, you are most likely to come across the hachiya; as they ripen they become very soft — prepare to get sticky as the soft flesh is almost jelly-like. Persimmons are best eaten raw, but can also be made into jams.

Where to find them: They may drop to the ground in front of you or be given away from roadside boxes if you’re in the countryside. Otherwise you can find them at any greengrocers or supermarket and farmer’s markets, too.

Your first encounter with these may be from a passing yakiimo truck, its sweet aroma and song fading off into the night. With a stone oven on the back, these trucks drive slowly around local areas offering this delicious fall treat to anyone nearby, hopping out to serve any customers who hail them down.

The potato is purple on the outside and yellow on the inside, with a sweet, unique flavor. Perfect as they are with a natural creaminess or even better with a little butter, salt and pepper, you can make them at home if you’re lucky enough to have a small oven or just befriend someone who does.

Where to find them: Aside from yakiimo trucks, check your local convenience store or supermarket (or even Don Quijote store) — they often have them cheaper than the carts (albeit with less charm).

Also known as Pacific saury, sanma (秋刀魚) are abundant in fall. On the small side and with a flavor similar to herring or sardines, sanma is best served simply — grilled whole with salt, a side of daikon radish, and a slice of lemon. This is a good one to look out for when you have a simple lunch set (teishoku) in traditional restaurants.

Where to find it: Your best bets are traditional Japanese teishoku restaurants offering cheap lunch sets. Or fresh at your local supermarket — as a bonus, sanma is usually pretty inexpensive.

Kabocha (南瓜) is closer to a butternut squash than the kind of pumpkin you carve up for Halloween. The deep orange flesh cooks up soft and sweet. It’s often simmered (in which case you can eat the rind, if it’s soft enough), added to curries, or deep fried as tempura or in a croquette (battered in panko).

Where to find it: Street vendors may sell pumpkin croquettes; otherwise try izakayas and tempura restaurants for pumpkin dishes, supermarkets, or convenience stores.

As the end of the rice season falls in, well, fall, it’s a great time to settle in with a bowl of shinmai (“new rice”). Thought to be softer and moister than older rice, it can only be tried from September to December before losing its “new” status. To achieve this, it must be processed and packaged for sale in the same year it was harvested — and is no longer sold after December.

Although you can enjoy a bowl on its own to savor the sweetness, it’s also a great way to combine some of the best fall flavors. Add ginkgo nuts, chestnuts, or matsutake mushrooms for a truly warming dish, full of subtle but hearty flavors you’re sure to enjoy.

Where to find it: Sold at supermarkets and local food markets, it can also be found in some restaurants.

Harvested as the leaves on the ginkgo trees turn golden, the nuts have long been a sign of Japanese fall. Toasted and salted, they are a popular drinking snack served this time of year at izakaya. The yellowish-green nuts are soft and chewy, sufficiently nutty and slightly bitter. They can also be steamed with rice.

The only downside is the terrible smell they release when ripe, but since you probably won’t be picking them yourselves, it doesn’t matter so much!

Where to find them: Always available at yakitori and izakaya joints in fall, as well as festival stalls.

Meaning “pine mushroom”, matsutake (松茸) have, unsurprisingly, an identifiable scent of pine when cooked, with a hearty, almost meaty texture. Although these mushrooms can reach hundreds of thousands of yen in price, you can also have them quite reasonably in restaurants and at home.

They are often cooked with rice or used to make a special fall soup, with a clear dashi broth. Matsusake mushroom soup is often made at home, with an instantly recognizable aroma, but you can also find it as a seasonal specialty in restaurants. Another common use is to cook chawanmushi, a savory steamed egg custard, often served within a set meal, with the mushrooms adding a seasonal twist.

Where to find them: Try your local teishoku restaurant or have a look in a supermarket or vegetable stall, but beware the hyper-expensive ones in department stores.

Note: In 2020, matsutake were placed on the “threatened” list by the International Union for Conservation of Nature. You can still eat them — but they might be harder to find.

One of the true tastes of Japan, sake (or nihonshu as it is called here), has its seasonal turns as well. Having been brewed in winter, pasteurized and aged over spring and summer before being ready in fall, hiyaoroshi (冷やおろし) is a delicious seasonal treat you should keep an eye out for. Akiagari (秋あが) is pasteurized for a second time at the end of summer, but otherwise the two follow the same brewing schedules and are both traditionally released in the fall. (Though refrigeration and demand have meant many sake brewers wait longer for the perfect flavor, and some release earlier to meet demand.)

The term hiyaoroshi is quite a loose term and it is possible to find non-pasteurized, single- and double-pasteurized versions — all at the discretion of the brewer. Considered to have a youthful and vibrant flavor, it is worth a try!

Where to find it: Ask for the specialty sake in nice bars, restaurants or in your local liquor store.

While we do our best to ensure it’s correct, information is subject to change. Post first published in 2017. Last updated in September 2022 by Maria Danuco.