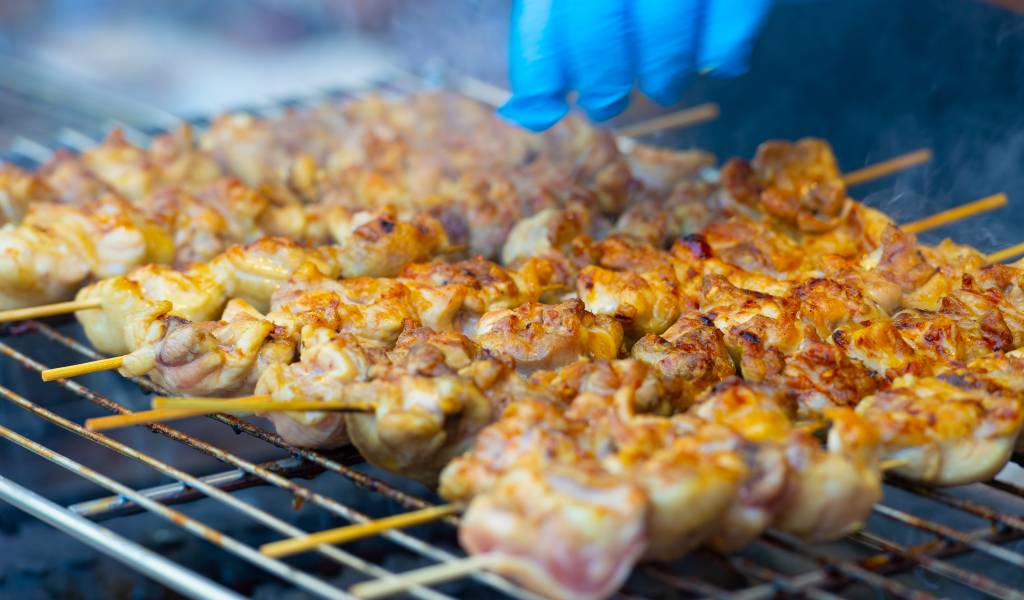 Heaven on a Stick: The What and Where of Yakitori

Don’t know your gizzards from your tail? You’ve come to the right place.

Whether it’s a full-blown feast or an occasional snack between rounds of drinks, it’s hard to overstate the simple elegance of yakitori. Chicken. On a stick. Cooked over charcoal. The only real variation comes in the variety of cuts.

There’s usually some crossover between yakitori, and yakiton, a similar style of cooking made using pork, so the two are often used interchangeably in English. There’s normally also kushiage (battered and deep-fried meat or veg skewers) on offer too. Today though, we’re keeping things simple by stickin’ with chicken (that’s a rhyme and pun—you’re very welcome).

So, for your referencing pleasure, a list of the most popular yakitori cuts:

Shio (salt) or tare (a sweet/savory sauce)
You’ll usually be asked whether you’d like your yakitori topped with shio or tare. As a rule, tare goes better with stronger flavors.

Momo – thigh
Juicy and tasty. A very forgiving cut of meat, so quite difficult to get wrong.

Mune – breast
On the dryer, blander side. A reliable favorite for pickier eaters.

Nankotsu – cartilage from either the breast or knee
Somehow between crunchy and rubbery. Not for everyone, it’s more interesting for texture than taste.

Negima – a mix of momo and negi (green onion)
Fated to be together. The Antony and Cleopatra of yakitori.

Tsukune – minced chicken
Unique to each shop. Texture can be smooth or crunchy (with nankotsu pieces), and spice levels vary wildly. Sometimes a raw egg yolk is provided for dipping.

Shiro – intestine
Chewy rather than meaty. Sounds off-putting but quite delicious served with tare.

Tebasaki – chicken wing
Sometimes a whole wing on a skewer, sometimes a few cut pieces. Expect to get your fingers involved.

If you’re uncomfortable with ambiguity, it might seem like a lot could go wrong with yakitori. In reality, once you know what to order it’s super straightforward. Unlike many Japanese cuisines, there aren’t really any rules to break!

You’ll see plenty of folks sliding the meat off the skewers using their chopsticks. This is great for sharing if you’re in a group, but there’s no pressure to do so if you’re flying solo. Feel free to eat straight from the stick!

If you are sharing, you’ll find some cuts tend to stick to the skewer—especially once they’ve cooled down. Spinning the skewer while pulling with your chopsticks can help unstick any especially tenacious morsels!

There’s usually a little pot for used skewers. If not, just place them back on the plate you got them from.

Where to try yakitori in Tokyo

Tokyo yakitori shops seem to go unaltered for long stretches—often decades at a time—which can make them an exciting way to experience unique sides to the city you’re unlikely to find elsewhere. Here are just five cheapo recommendations within the comfort of the Yamanote Line.

Torikizoku – Branches all over Tokyo

In direct contradiction to my last statement, I’m going to start by mentioning Tokyo’s most prominent homogeneous yakitori chain, Torikizoku. Past the cute branding, there’s very little personality to Torikizoku, and the booths negate any possibility of interaction with other customers or staff.

All that said, Torikizoku isn’t as popular as it is by mistake—there are a few compelling reasons to go here. Orders are placed via a tablet on your table, all in English, and there’s usually plenty of space for groups. They’re open late (the closest branch to me is open till 5 am). It’s also a good choice for less adventurous eaters—there are plenty of fairly plain options and the chicken is all super thoroughly cooked. If you’re looking for a clean, reliable and low-stress experience, you could do worse.

Open for more than 60 years, Tagosaku has had plenty of time to build character. As evidence of that fact, the tare has remained unchanged since the shop first opened. I don’t just mean the recipe is the same. It’s the same sauce. They continuously add ingredients to keep the pot full year-round. It’s a no-frills retro izakaya (pub/restaurant), serving yakitori alongside hearty stews and rice dishes. If you sit at the bar, you can watch the chefs expertly flip your skewers over the charcoal grill.

Tagosaku is famous for serving Hoisu. (Apparently) once a popular alcoholic mix-drink, Hoisu seems to have fallen from the public consciousness, and is increasingly hard to find in bars. I had a tough time picking out any specific flavor, but if you’re a booze completionist, it’s worth trying!

Well known for its rustic Showa-period (1926-1989) aesthetic, Bunraku has been serving customers since 1958. Once a notorious black market, the surrounding area of Ameyoko is more of a nostalgic tourist market these days, but it’s charming nonetheless.

It’s a small shop, so if it’s too busy don’t hesitate to wander around—you’ll be spoilt for choice for other yakitori shops in this area.

Omoide Yokocho (usually translated as Memory Lane) is a ramshackle collection of small restaurants just outside Shinjuku station. It’s grungy and chaotic in a way Tokyo tends not to be—making it a nice change of pace. If you’ve walked down it before you’ll know there’s no point in planning ahead—if you see enough space to seat your group, go for it!

There’s a bustling yakitori alley between Yurakucho and Shinbashi stations. When the restaurants are in full swing, smoke billows dramatically from the entrance—a railway arch under the Yamanote Line tracks. It’s a popular spot to wind down after work, so there’s often a sea of tables and chairs spilling out into the streets.

Nearby are some of central Tokyo’s few remaining alcohol vending machines, arranged into an intimate standing-bar area beneath the tracks. If you’ve got time, it’s worth the short walk!

Open with Maps
Ebisu Shibuya Ueno Yurakucho
Written by: Felix Wilson
Filed under: Eating & Drinking
Tags:
Sharing
Questions or comments about this article?
Start a thread on our community forum
Ask our local experts about Tokyo