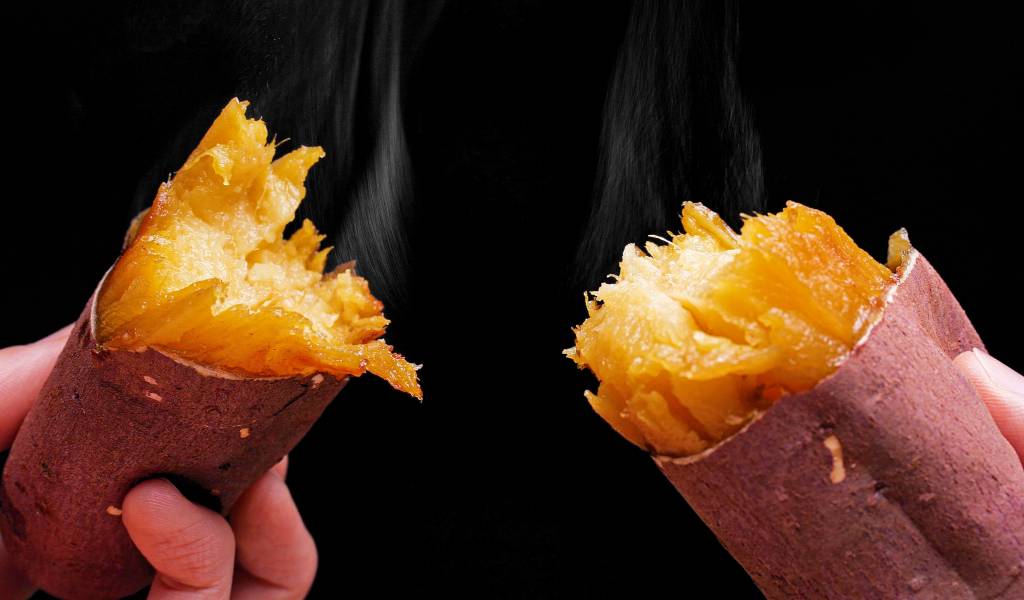 To the older Japanese, the lament-like song of the baked sweet potato seller is the soundtrack of autumn and winter. From what I hear, there used to be more of them making the rounds of old Tokyo pushing a cart, but these days it seems there are only a few who drive around (yes, the carts have been replaced by small open-back vans—progress, right?) selling their freshly baked wares. If you live/stay in the eastern areas of Tokyo or often enough throughout the colder seasons, at dusk there’s a good chance you’ll see them or, more aptly, hear them (the long drawn-out song usually precedes them).

As the song says (“yaki-imo, ishi-yaki-imo”) these vendors sell Japanese sweet potatoes (the Japanese, purple on the outside, yellow on the inside kind) freshly baked on a stone oven they carry in the back of their truck—open flames and everything. They do their rounds, usually in smaller back streets (they need to move slowly so they’d be a problem in big avenues) and when someone wants to buy they call them out, they stop, get of the drivers’ seat and serve their customers. The whole thing seems as far removed from Japan’s high-tech profile as can be (the first time I saw one of them was six years ago in Akihabara of all places: imagine my surprise), but people really love them.

One bite of a just-baked yakiimo explains why; they are creamy and, of course, sweet and even without adding butter or extra salt, they have a rather strong taste and they go down with a velvety texture. This, and the old-fashioned atmosphere surrounding them (most yakiimo trucks also carry a red chochin lantern for that extra traditional touch) are enough to make you forget their price. Cheap they are not, but there’s a trick I’ve seen old Tokyoites use: they don’t go for the price the vendor asks but say something like “I have 200 yen, what do I get for them?”—depending on the vendor this can mean perhaps half a big potato to a couple of smaller ones.

If you’d rather opt for a more economic trial first (this is Tokyo Cheapo after all!) or you’re not sure where to find an authentic yakiimo-ya-san, try a super market or a “Don Quixote”: many  of them offer yakiimo in stands (usually outside or as soon as you get in) and prices start at 100 yen. It might not be the real deal but it is close. And cheap. And very tasty. And as Japanese as sushi or ramen.

Written by: Grigoris Miliaresis
Filed under: Eating & Drinking
Sharing
Questions or comments about this article?
Start a thread on our community forum
Ask our local experts about Tokyo