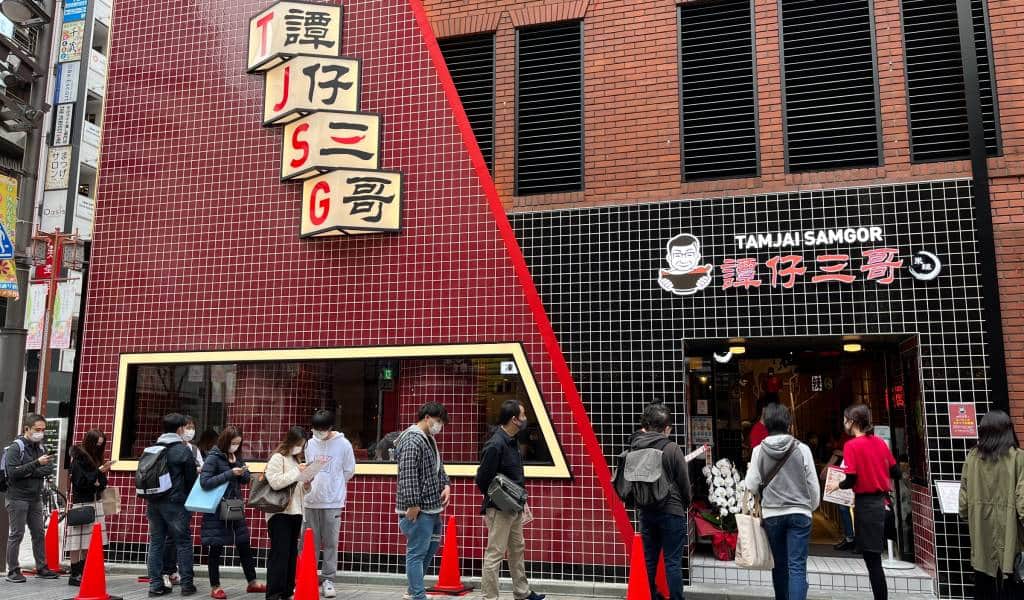 Tamjai SamGor Mixian (“SamGor”) is a fast casual restaurant from Hong Kong specializing in mixian (rice noodles), with 74 outlets and counting, including in Singapore. They have also garnered Michelin Bib Gourmand distinctions for three years in a row. We went to sample these famous noodles to let you know if SamGor is worth adding to your foodie wishlist.

Hong Kongers may already be well-accustomed to the mantra 香麻辛辣 ‘hon-ma-san-la’ of this famed rice noodle chain, but it’s being introduced to Japan as an ‘untranslatable’ flavor concept.

Originally established as a family business in 1996, SamGor (meaning “third brother” in Cantonese) diverged from Tamjai Yunnan Mixian (“Tamjai”) and opened their first restaurant in 2008.

In 2018, Toridoll Hong Kong (a subsidiary of Toridoll Japan) acquired both SamGor and Tamjai brands. The chain operator is aiming to double their store network to 330 by 2024, with global expansion plans including 25 new outlets in Japan and 15 in Australia.

Founder Mr. “SamGor” Tam Chap Kwan believes the “most important thing is whether customers like it”, so the noodles are largely customisable with choice of soup base, spice level, and a large selection of toppings.

The mixian are made simply with rice and water, and have a smooth surface yet chewy texture. According to Mr. SamGor, he figured these humble, rather bland noodles would pair well with flavourful broth.

Inspired by Sichuan hot pot and mala seasoning (Chinese characters ma (麻) “numb” and la (辣) “spicy”), which includes flower pepper, chili oil and star anise, he describes the creation of his original soup bases as a process of trial and error.

The brand is also renowned for its incremental spice scale ranging from non-spicy, low (10), mild (5)… all the way up to ‘extremely fiery’ and ‘hell fire’. Now that’s intimidating! Level 10 is said to be the best starting point for beginners, while level 5 is also very popular in Hong Kong.

Review of SamGor in Shinjuku

Marking its launch in Japan, SamGor’s Shinjuku store opened on March 31st 2022, with Kichijoji and Ebisu stores to follow on 14th and 21st April, respectively.

The brand’s Japan account has been tweeting wait times; ranging from 30-180 mins in their first few days post-launch. To find out if it justifies all the buzz, we went to the new Shinjuku store to try for ourselves.

Turning into the main street, we immediately saw the polished red and black tiles, and glowing neon Tamjai SamGor sign (a similar exterior to the Central Flagship Store in Hong Kong).

We arrived at 2:30pm on a Tuesday, rather late for lunch time, but there was a queue of people ready and waiting for noodles. We joined what we thought was the end of the line but were then directed around the corner where the queue continued, with about 25 people total.

As we neared the front of the line about 40 mins later, we received a menu to mull over before a staff member returned to explain it in more detail.

Notably, there are 6 original soup flavors (with varying spiciness), and all noodles come with freeze-dried tofu, Chinese chives and bean sprouts (unless you want to opt out). Topping options (¥90–¥150) include meat, seafood, and vegetables, while there are a selection of side dishes, soft drinks and some basic alcoholic drinks.

Tips for ordering at SamGor: