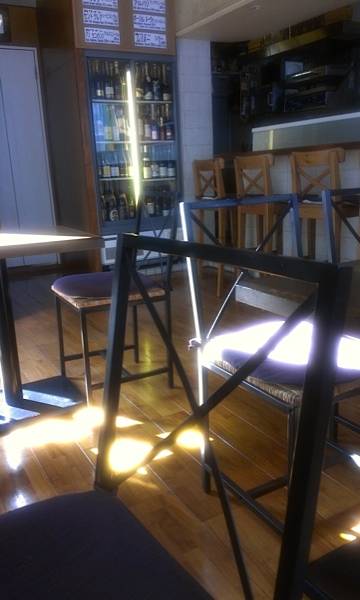 The White Fox, Distinct Meals in a Cool Den.

The White Fox recently celebrated its sixth anniversary, and they are going strong.

Chef and director, Trevor Blyth, is no stranger to accolades. He has worked at four major three-star Michelin restaurants and has more recently earned The White Fox a spot in the Miele Awards, an honor specifically endowed to fine restaurants in Asia. The White Fox continues to draw attention to his artful style and brilliance in pairing, preparing, and balancing tastes. He naturally and effortlessly brings-in French cuisine, in which he is classically trained, with Japanese cuisine, a natural fit and movement for a chef living and creating in Japan. His kind of fusion seems as natural as leaves turning in the fall.

Cool minimalism, a very exciting menu, and the welcoming, no-ostentatious-air-about-them-personalities of the chef and his wife, Hiromi Blyth, are indeed fresh and immediately electric. Airy and bright in the day, the space and team welcomes you for dinner and late-night wine, sake, and Japanese-French tinged appetizers and plates.

Here is a dish I absolutely enjoyed– a marinated salmon donburi, or rice bowl. The salmon hangs-out in Blyth’s fabulous salt-spice concoction for twelve hours before the French salt, whole, dried juniper berries and star anise are washed off. By that time, the salmon has soaked up the house-made blend to where every bite of the dish, also featuring salmon roe/ikura and quail egg, is delectable with the warm rice and cool avocado. This satisfying lunch dish is 900 yen.

Other lunch offerings include: a spaghetti featuring the venerable truffle oil for 900 yen, a grilled mackerel “himono”/dried fish donburi for 1,000 yen, grilled mackerel “himono” with potatoes and konbu escabeche for 1,000 yen, or braised pork with a hatcho miso and coriander sauce for 1,400 yen. (interesting pairing of coriander and miso, right?) Chef Blyth’s combinations are to be trusted and enjoyed.

For 100 yen, coffee or tea is added. A sumptuous dessert-add on to your meal is 500 yen. Never in my life have I been treated to an ume-shu granite piled atop a rich and creamy banana, black sesame bavaroise. This decadent dessert was at the same time jaw-dropping and cozy. The candy-sweet/a-bit-sour ume-shu shavings so perfectly accented and balanced this French custard-based dessert, with the warmth of black sesame and banana. He truly is at home making such delicious reflections of life hear, paired with years of European training and creativity.

Other desserts include black rice pudding with pinapple, ginger, and lime; or how about green tea parfait with white chocolate and Griotine cherry fondant? Griottines, you will be delighted to know, come from the Balkans and are macerated in Kirsch liquor. YUMMM. This seemingly small ingredient provides a little beam into Chef Blyth’s selection of ingredients and formation of his hit-menu.

Appetizers (many under 1,000 yen) are comparable to tapas and wine and sake are sold by the glass. Hiromi will guide you towards best pairings.

Seated on the settee, I felt like a lucky kitty, stretching-out to great music and sunlight streaming in. I cannot wait to come back with friends and even plan small parties in such a space. Where else can you have a renown-chef serving up apps like seared curry spiced scallops with white miso aioli and sweet potato chips (950 yen)?

Their  drink menu also exhibits such taste.  A nice zinfandel starts at 750 a glass, while Japanese liquors also may be optimally-paired with your apps or entrees. International wines, Champagnes, apéritifs, sherries, brandies, and sho-chu abound. This is one place where the presence and richness of seasonal Japanese flavors and ingredients unwind with exciting French tastes and technique to create something altogether new and exciting. Discoveries await.

You can find The White Fox perched comfortably on the second floor, just around the corner from Oji Station.

The menu is written in both Japanese and English.

The White Fox seats 18 lucky-ducks quite comfortably.
Written by: Melissa Uchiyama
Filed under: Eating & Drinking
Tags:
Sharing
Questions or comments about this article?
Start a thread on our community forum
Ask our local experts about Tokyo