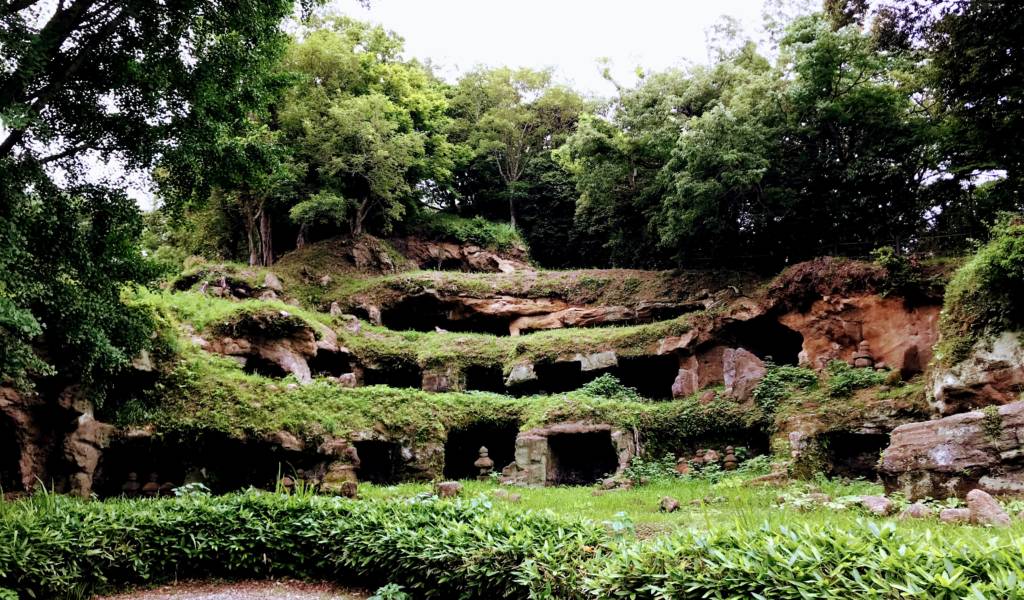 If you’re not afraid of ghosts—or you’d like a taste of ancient Japanese Buddhist spiritual practice—then these somewhat spooky catacombs and final resting place for samurai souls will be your cup of green tea. The Mandarado Yagura Caves are a series of man-made caves originally used as tombs for the samurai class, but now they house stone cenotaphs (empty tombs). The site has previously been excavated to reveal skulls and cremation pits, and the soil has mostly been replaced, but there are information boards with photos explaining the site.

It’s a scene straight out of a Ghibli movie, especially with the cenotaphs vaguely resembling small stone houses, with each piece representing an element: earth, water, fire, air and sky. And for your spooky feels, you’ll note that the cenotaphs big earth and water stones at the base have a chamber for housing one of the deceased’s bones.

There’s a large number of such caves and cenotaphs all around the hills surrounding Kamakura, so you’re likely to stumble across a fair few while hiking the hills.

The caves are marked on Google maps, but the entrance is a little hidden. Follow the road parallel to the Yokosoka line, and then join the trail to the Nagoe Pass.

Then it’s up the hill into the forest and a right turn, the caves are up some steps.

The caves are open to the public for a limited time only, usually for some portion of spring then again in the fall, and only on certain days. In 2018, opening dates are: April 21-May 28 and October 20-December 17 on Saturday, Sunday, Monday and holidays only.

Even if they are closed, you can still see through the fence and peer at the eerie tombs from a slight distance.