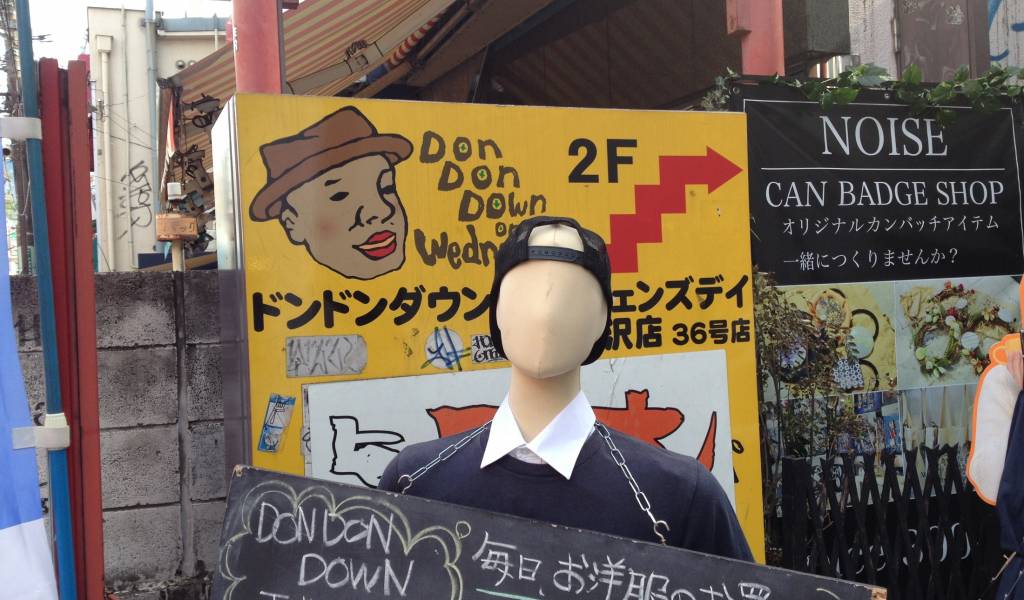 More than a few hours in Tokyo’s fashion central (Harajuku) or hipper locales (Koenji and Shimokitazawa) will give you the distinct impression that, for one, good clothing just doesn’t come cheap here. “Vintage” shops sell clothing suspiciously resembling the kind you’d grab out of a Goodwill or otherwise thrift-like store stateside for a few bucks, except this time they’ve added a few digits to the asking price. I don’t fault the business model; you’ve got to pay for that charmingly scruffy art-gallery overhead somehow.

On the other side of the coin, you’ll also find racks and racks of dirt-cheap jeans, pants, and shorts at Kinji in Harajuku. Although the store has its own kind of magic, it’s in the end a bargain bin clothing store; like the low-profile Mode Off, you’ll be hard-pressed to find any real gems.

Enter the hero of our story: Don Don Down on Wednesday

Combine the kitschy name and its eternally blushing, questionably ethnic mascot and you’ve got enough draw to pull in a curious young Americano on New Year’s, the time of year where most Japanese stores break out their killer deals. Alright, admittedly I was dragged in by my shopping partner, but my first experience with Don Don Down (which I believe deserves well its acronym of DDDoW, or properly pronounced, D-D-DOW!) was nothing short of miraculous.

“Don Don Down on Wednesday” may sound off the wall, but the name is grounded solidly in the store’s business model. The Japanese dondon is one of those very common onomatopoeia, this time meaning “steadily.” In this case, the price of the item steadily drops each week on (you guessed it) Wednesday. Each item is given a certain fruit or vegetable tag, the price for which drops week by week. For example, a fine-looking pinstripe Giorgio Armani two-piece suit (no joke here) actually sat on the rack in Harajuku for a solid two weeks, at 3,150 and then 2,100 yen before it was snagged by a lucky thrifter. Other items will sometimes stick around all the way to 105 yen, a steal for anything in the store. That is of course if it fits.

The gimmick, if you haven’t figured it out, is the waiting game. Will you wait, go for it, or have your beloved prey stolen out from under you? It’s a fascinating The-Price-is-Right-esque twist on the auction idea, encouraging customers to stop by week after week to check out the newest deals. On top of that, only listing the tag’s type on the receipt makes it look like you’ve been buying groceries, an added touch of cute to an already charming storefront. I’ll gladly confess to having stopped by three of the chain’s dozens of stores within a month, with 11 total in the greater Tokyo area, patronizing the Harajuku location three times. I myself have snagged around ten articles, including two suit jackets for somewhere in the vicinity of 8,000 yen.

Of course, the store’s not full of gems. Like all cheap used clothing stores, it carries a minimum of one full rack of flannel/plaid/flannel-like substances at rock bottom prices, passed along from the low rates you’ll get for selling DDD your clothes. The trade-in counter will give something along the lines of 500 yen per kilogram of moderate-quality clothing, which as you might imagine is rather stingy. Cleaning out a few pairs of pants, shirts and vests netted me a hefty 1,500 yen, paying for the round trip to the store and a cheap bow tie from an accessory shop on the way back up the ever-crowded Takeshita Street. As a side note, bow ties are cool. 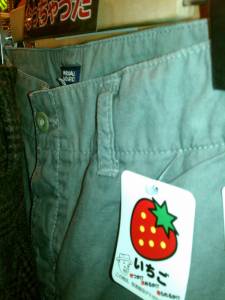 The Harajuku and Mitaka shop both give somewhere between a third and a half of the floor space to men’s clothing, above average for your usual boutique in Tokyo. The Kichijoji store however was so utterly cramped in layout that it was difficult to tell exactly where the men’s section ended and the women’s section began. Eventually, I figured it out once I pulled a pink blouse off the rack by accident. Although some of the merchandise is reportedly shipped across from the US, the vast majority comes from people on the streets of Tokyo. As such, sizing will heavily favor the lighter crowd. Jeans and slacks for men will thin out toward the mid-90 centimeter range, with virtually nothing above 100.

Of course, like other vintage stores it carries a non-veggie “Brand Item” section with normal price tags. It isn’t ludicrously expensive on the whole, but you will wonder where the store’s primary revenue comes from. The vitamin-laden area will however have a few items boggling the budget-minded, such as this pair of “Journal Standard” brand pants selling (or not selling, as the case may be) for 5,250 yen.

The Verdict: Although Don Don Down will eat up your time if you let it, it can hold some superb bargains for the lucky, the persistent, and the svelte.

Don Don Down on Wednesday (ドンドンダウンオンウェンズデイ)
Official Website
Varies from store to store. Some open at 11am, but many don't open until noon.
Written by: John Matthews
Filed under: Fashion | Shopping
Tags:
Sharing
Questions or comments about this article?
Start a thread on our community forum
Ask our local experts about Tokyo