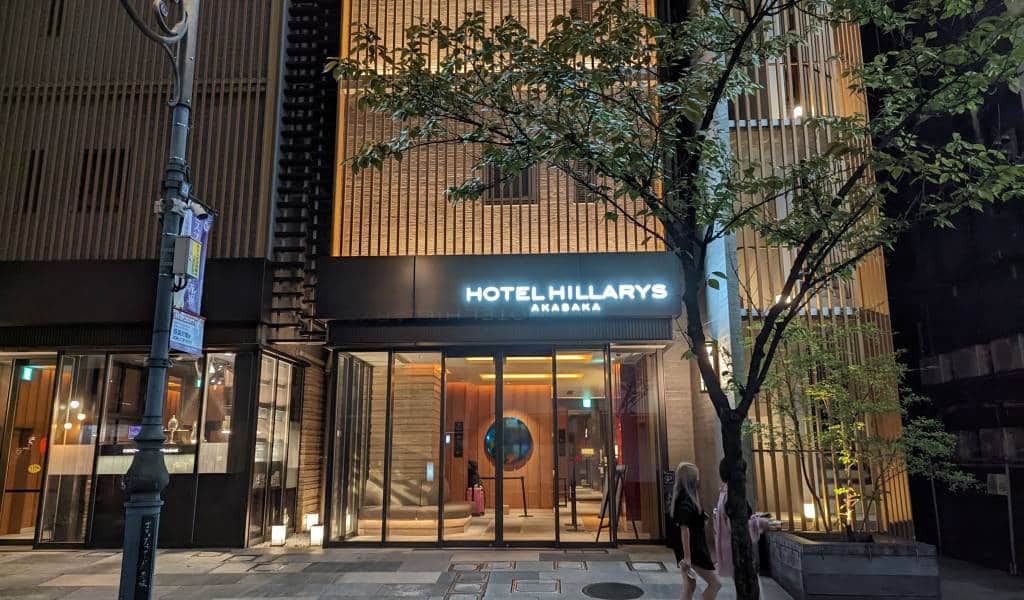 Hotel Hillarys is a modern, budget hotel with a slightly unusual layout. While appearing to be a single building, it’s actually made up of two separate buildings joined together on the first and ninth floors.

The hotel has a kind of modern Japanese aesthetic, with lots of earthy, subdued, woody tones. The hallways outside the rooms are quite different though, with a kind of retro-future look.

The front desk staff at the hotel speak good English and didn’t have any problems communicating.

The main feature of the hotel is the mens and womens spa on the 9th floor. Guests can use the spa for free. The spa is basically an onsen-style bath that you can soak in.

There is a fantastic rooftop terrace (more on that below) but it is only open at breakfast time.

There is not much space in the lobby, so hanging out there is not really practical. Additionally, the ground floor restaurants (including a shisha bar and an osteria) are not part of the hotel, so you’ll need to order food or drink to hang out there.

At least half of the rooms in the hotel have windows facing the neighboring building, so there isn’t enough natural light to illuminate the rooms.

Rooms in the other half of the hotel face an empty parking lot so they have a bit more light. However, all the rooms have opaque windows, so there is no view from any of the rooms.

The rooms are small, but well laid out. Having the sink in the room instead of the bathroom is an interesting touch.

This writer of average height found the beds (apparently sourced from American bed maker Simmons) to be somewhat short, with feet almost dangling off the end. If you’re over 180cm (5’11”) then you might have to curl into a ball!

The rooms are comfortable enough with a safe, kettle, refrigerator, desk, and large screen TV.

The lack of natural light was a slight issue, but on the plus side, the window was openable, so it was possible to circulate some fresh air in the room.

The desk was more than sufficient for banging out a few emails, but you wouldn’t want to spend more than an hour or so seated here facing the opaque window.

Besides the slightly too small bed, the pillows were definitely on the soft side, so if you like a firm pillow, you may be out of luck.

The bathroom was of the unit variety with the shower in the bath. Moving the sink to the main living space does give the bathroom slightly more space than similar sized unit bathrooms.

The location is quite convenient, with easy access to train stations, supermarkets, convenience stores, and eateries.

The hotel is only a couple of minutes walk from Akasaka Station on the Chiyoda Line and slightly further away from Akasaka-Mitsuke Station, served by the Ginza Line, the Marunouchi Line, the Hanzomon Line, and the Yurakucho Line in the opposite direction. With so many lines passing through the area, it’s a breeze to get virtually anywhere in Tokyo.

From Haneda Airport, the easiest route is to take the Keikyu Line that runs into the Toei Asakusa Line, then change to the Tokyo Metro Ginza Line at Shimbashi Station, then alight at Akasaka-Mitsuke and take Exit 10 to the surface.

From Narita Airport, the fastest and easiest way to get to the hotel is via the Narita Express to Tokyo, then switch to the Tokyo Metro Marunouchi Line, then leave the train at Akasaka-Mitsuke and again, take Exit 10.

The surrounding neighborhood is a mix of offices, retail, and eateries. It’s a popular drinking and socializing area on weekday evenings, but it’s not as seedy as nearby Roppongi, so there are far fewer touts. On weekends, the area is almost deserted except for tourists.

Akasaka is packed with good places to eat and drink. In the area you can find whatever cuisine you fancy. There is sushi, high-end ryotei, cheap and cheery izakaya, Italian, Chinese, French, Korean, Thai, Spanish — take your pick. Palermo (despite the name) serves delicious Neapolitan style pizzas and pasta dishes. Itamae Sushi is a good-value sushi chain in the area. Craft Beer Server Land serves up vegan dishes with a wide choice of local and international craft beer. For massive volume at an affordable price, head to Chinese Cafe 8, but be careful not to over order! For one of the more unique (but by no means cheap) dining experiences in Tokyo, make a booking at Ninja.

Hie Shrine and its popular path of red torii gates is a short walk from the hotel. The traditional Japanese garden at the nearby New Otani hotel is also worth checking out. If you’re a fan of electronic gadgets, head to Bic Camera to browse the huge range of items.

The buffet breakfast (available for an additional ¥1,600 to ¥2,000 depending on the package) is quite ordinary. Toast and fruit to add to the yoghurt were two notable items that were missing.

The (pre-sweetened!) coffee was from a push button machine. However, breakfast has one great thing going for it. If the weather permits, you can eat it on the rooftop terrace with comfy sofas and views of the surrounding neighbourhood, which is honestly, a great way to start the day.

With the rooms with interesting design elements, mens and womens spa, and relaxing terrace on the roof for breakfast, this place is ideal for travelling couples for perhaps a single night. Besides the terrace, there aren’t a lot of common places to hang out, so an extended stay might not be ideal.

The hotel has no information available about sustainability measures.

Order the breakfast if you’re going to be there during nice weather in spring or fall. In summer, even in the morning it’s likely to be too hot to eat breakfast on the rooftop terrace.