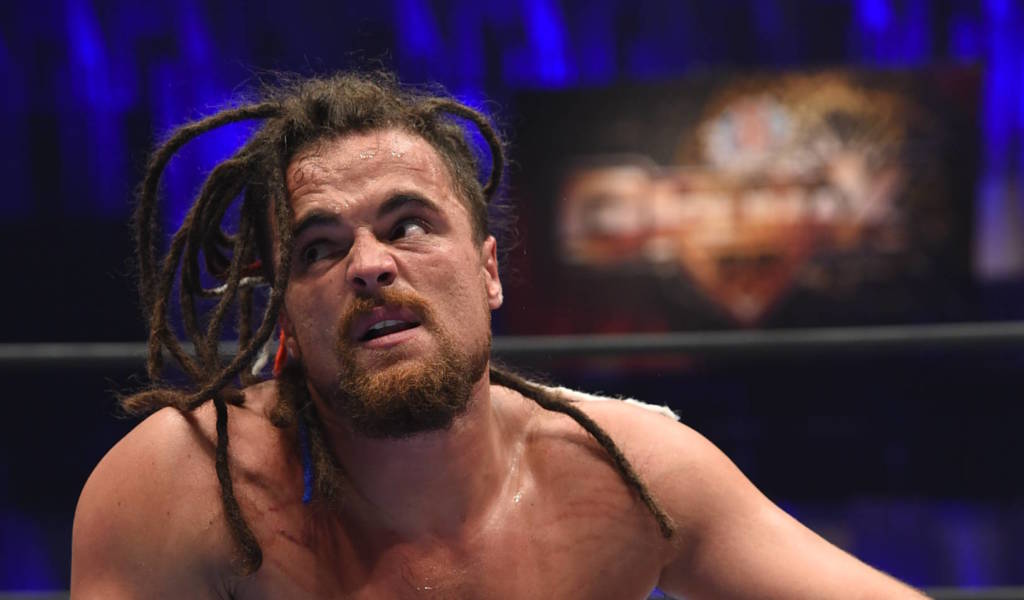 Even those with no interest in the world of pro wrestling are probably familiar with the international juggernaut that is the WWE or at least are familiar with some of the stars that came from it: The Rock, Hulk Hogan and John Cena just to name a few. But did you know that Japan is home to the next biggest international wrestling league? No, not sumo, but legit showman-style rock ‘n’ roll professional wrestling—in the form of New Japan Pro-Wrestling (NJPW).

One of the most exciting fighters in the league is a man by the name of Juice Robinson. Originally hailing from the US, Robinson was once a WWE fighter, but left in 2015. After a few years of hard work, guts and determination he’s climbed the ranks and become a bona fide star in the NJPW world.

We chatted with Juice to learn more about NJPW, how he got started, the differences between Japanese and international fans and his one-time career as a sideshow attraction.

So Juice, can you run us through how you ended up in Japan?

As a foreign wrestler, when you’re growing up you know the goal is WWE, that’s where you want to be. That’s all I wanted to be when I was a kid, a WWE superstar. Then randomly in a happy accident I somehow got signed when I was 21 to a WWE contract. But after four years I felt like I had stagnated. I started to look around. I wanted to get out and go somewhere there was no career ceiling for me—that’s here for me, I feel like I can do anything.

Were there any other countries besides Japan you were seriously considering starting a career in?

I moved to England pretty quickly after leaving the WWE. I started working on a carnival circuit, which is the best way I could describe it. They have these amusement parks* called Butlins, and you just do a wrestling show in front of 500-1,000 eight-year-olds. You do that once a week, but you go to every single Butlin, it’s like a circuit; it’s great, so much fun. You live in little “chalets” they call them, they’re like little cabins on the amusement park. It was a whole hell of a lot of fun.

How much did you know about the wrestling scene in Japan before you made the jump from the UK?

It’s funny because I used to laugh at the idea, because my boss at the time was a big deal in Japan. His name was Giant Bernard and he had wrestled in WWE, came to NJPW, was very successful and went back to work as a coach and big-wig. He’d always say, “Have you thought about wrestling for NJPW?” I’d laugh, like, “Me, in Japan?!”

I’d always had this perception that it was this martial arts, real hard-hitting style. Not that I don’t hit hard, but I really like costumes, colors and I like to have fun too. I didn’t know that would fly here. I found out that it does, it’s full of all different kinds of people. I just thought it was all “black boots, black trunks, let’s put these mouthpieces in and hit each other as hard as we can.”

So from that, did you start doing more homework on the scene here?

I first watched NJPW as a whole show through Wrestle Kingdom 9, which is a show held annually at Tokyo Dome. It’s like our Super Bowl, it’s the culmination of all our stories over a year and I watched that whole show.

I saw Kazuchika Okada and Hiroshi Tanahashi, all these guys with really colorful personalities. That’s when I started going, “Oh I could definitely go work there.” It’s classic pro wrestling. I got fired up and started watching more and more.

I wish I had a better grasp on the history of NJPW as far as the legends from the ‘80s and ‘90s, but everyone just has a different story and is inspired by different things. Even though I was more inspired by people like Shawn Michaels and Bret Hart and Stone Cold Steve Austin, the Japanese scene is starting to rub off on me more now.

For lack of a better term, I had to start over, I ate a little sh*t, lost the ego, really had to start again from scratch. Some ask, “What did you get paid?” But I didn’t get paid anything when I first came here, I lived in a dojo, ate soup. Everyone thinks it’s just you click your heels and it’s easy, but you really gotta start over.

Has Japan changed your wrestling style?

Oh yeah, the NJPW style has definitely rubbed off on me. I’m definitely an American wrestler still, that’s where my fundamentals are, but the hard-hitting, the guts and determination that a Japanese wrestler has is something that’s so incredibly awesome. Of course their style is going to rub off on me, because I’m fighting them every night. It’s like osmosis.

Do you have a favorite place in Japan to wrestle?

My favorite is Korakuen Hall. It’s not like it holds 100,000 people; it holds like 1,500-2,000 people and it’s very intimate. The energy is great—the fans keep up with the entire storyline. You can trust everyone in Korakuen Hall has their finger on the pulse, just the energy you get in that little building is so awesome.

When I went to the show there I’d never heard a group of Japanese people be so loud and rowdy, it was amazing. Yeah, they love it! Wrestling is like rock ‘n’ roll, it’s an energy exchange; you could be having the best match of your life, but if you’re doing it in front of no people or you’re doing it in front of people who don’t give a hot damn about it, it’s no fun. You wanna give them energy and they give it back.

What’s the biggest difference between Japanese and American audiences in general?

[The Japanese audiences] weren’t always as boisterous as they are now. If you watch Japanese wrestling from the ‘80s and ‘90s they were a lot more polite than a foreign audience. I think they’ve learned, “Oh yeah we can boo, we can cheer, we can chant stuff.”

They still don’t as much as an American or European audience, in fact US and European audiences are almost starting to try and take over the show. That would never happen here, because the Japanese fans pay their money get their ticket, sit in their chair and want to join you for the ride.

In terms of that energy you mentioned before, is there a big difference in the atmosphere of the show between here and overseas?

It’s very different. Here in Japan, the audience tension builds up, and builds up, and almost turns into a frenzy where they can’t control themselves, it’s just awesome. In terms of American audiences it’s hard to explain but I don’t like it as much. It’s fun, but they don’t make me feel the same as in Japan.

What about daily fan culture, like outside of the ring?

The fans here are just awesome, they’ll sit outside your hotel or airport just to get a picture with you. In fact yesterday I got in an elevator with these two five- or six-year-old kids. I was in NJPW shorts and I knew they were like, “Ooooh that’s a wrestler!” I could sense they were just looking at me, I’d just ran and it was 100 degrees so I was dripping sweat, I had glistening muscles and my veins were all popping out and I was dying! But as they got off the elevator I just said “Mata ne” (see you) and they were like “ooooh”, they couldn’t believe it. The kids here are amazing, they think you’re a superhero—it melts your heart.

For those who are interested in learning about NJPW but aren’t too sure where to begin, where would you tell people to start?

I’d say start with the G1 Climax, that sets up the story for the Tokyo Dome and by then you’ll be hooked. You can follow a wrestler wrestle his way through the G1, win the chance to fight the main event, Tokyo Dome, and have a shot at the heavyweight championship. Whether he succeeds or fails, that five-six months is where things all start.

Who are your favorite wrestlers in the competition?

I’ll just speak about foreign wrestlers: one of the top guys is Kenny Omega, he’s a good guy to have leading the charge as far as foreigners go, he speaks the language, is a great wrestler. He has the best matches and constantly outdoes himself, almost to the point where we’re like how can he outdo himself again?

Trent Barreta is another one, one of the best guys I know, but he recently got hurt and he’s been out for 10 months. He’s popular but he hasn’t shown Japan his full potential, ‘cause I think he can be the best. Kenny Omega’s fandom is pretty huge even when he’s fighting against Japanese wrestlers.

Do you think that there’s a sense of patriotism for Japanese wrestlers in NJPW or is the crowd split?

Wrestling is universal, it doesn’t matter, and that’s what’s great. It’s just like if you see an incredible musician you don’t care if they’re from Tahiti, if they’re good, they’re good.

Looking forward, what are your plans for the rest of the year and the years that follow? Do you think you’ll stay here in Japan?

Yeah for sure, I feel like there’s no ceiling here for me now. It’s growing so much and this is the fun part, because who knows what’s going to happen? All we know is it’s going to get better next year and after that. So I have no plans to leave at all. I could be here for the rest of my career and I’d be so happy.

Note: Juice Robinson spoke to us in an unofficial, personal capacity, and his views do not necessarily reflect those of NJPW.

A bit about the New Japan Pro-Wrestling scene

Founded in 1972, the competition has in recent times gained some serious traction across the globe, and if you make it to an event there’s no question as to why; nail-biting theatrics, evil villains, addictive storylines and even rumored inter-competition romantic relationships (Google the Golden Lovers). It’s a fascinating, groundbreaking world and one definitely worth exploring.

There’s something magnetic about NJPW. The malleability of the league, the grit and determination of the fighters and the die-hard Japanese fans make it quite unlike anything else in the world. If you’ve ever thought about seeing a Japan pro wrestling event, you won’t regret it. To help you get started, here’s a beginner’s guide to the wild world of New Japan Pro-Wrestling.

Written by: Lucy Dayman
Filed under: Editorial
Tags:
Sharing
Questions or comments about this article?
Start a thread on our community forum
Ask our local experts about Tokyo