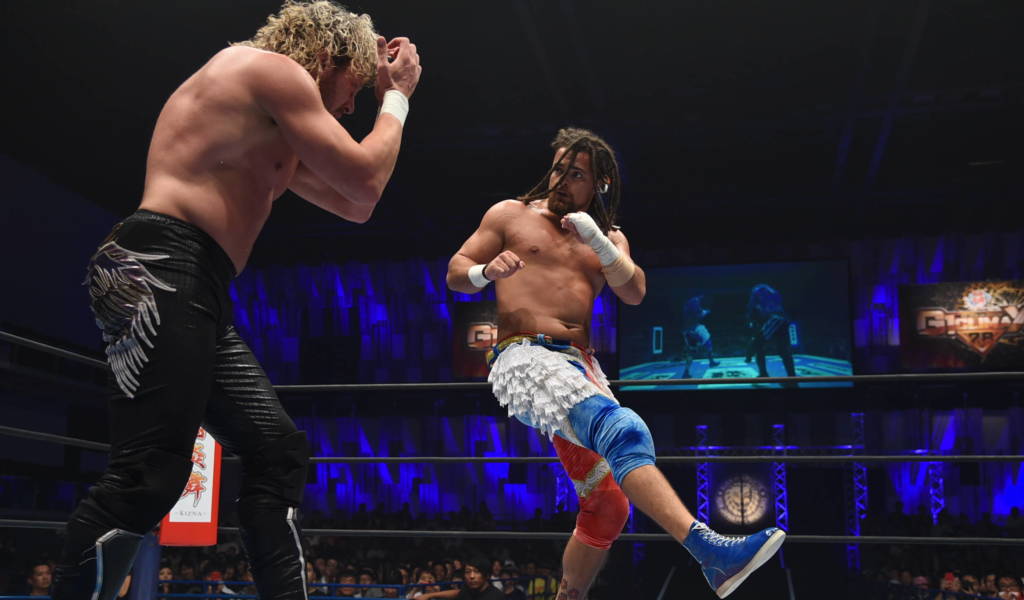 Here we’re talking wrestling: not sumo, but long hair, sparkly spandex pants, rock ‘n’ roll style pro-wrestling. It seems everyone knows about the WWE, but maybe a few less know that Japan is home to the world’s second-biggest organization in professional wrestling—New Japan Pro-Wrestling (NJPW). Many argue that thanks to its underdog status, Japan pro wrestling is far more experiential, groundbreaking and exciting than some of its contemporaries.

In recent times, NJPW has gone completely global, capturing the devotion, attention and admiration of wrestling fans across the world. It’s rowdy, theatrical and a whole lot of fun while being a solid, serious thing. If you’ve ever thought about seeing wrestling, Japan is the best place to do it, so here’s a crash course on where to begin.

Originally founded in 1972 by retired professional wrestler and martial artist, now politician and wrestling promoter Antonio Inoki, New Japan Pro-Wrestling, Shin Nihon Puroresu (新日本プロレス) in Japanese, has been around for a while now. Throughout the years it’s teamed up with a number of other international leagues. But if you’re reading a beginner’s guide to NJPW, chances are they’ll all be a jumble of strange acronyms, so let’s just say they have connections to events in Mexico, the US, the UK and occasionally host cross-promotional matches with other Japanese “promotions” (competing leagues).

In 2011, NJPW hosted the promotion’s first tour of the United States, titled “NJPW Invasion Tour 2011: Attack on East Coast”. Since then, it’s taken over the globe in terms of international accessibility and fandom—so much so that a number of wrestlers, such as Juice Robinson, have joined NJPW to further their career opportunities, showing just how seriously international fighters take this competition.

The NJPW season basically runs throughout the year, so there aren’t really specific seasons. There are definitely months of the year which are much livelier than others, thanks largely to a handful of main events, but to keep it simple, let’s look at two of the biggest: Wrestle Kingdom (January) and the G1 Climax Tournament (July, August, September).

This kicks off the year in spectacular style, and it’s an easy place to start your NJPW journey both chronologically and thematically. Held right at the beginning of January at Tokyo Dome, this event draws all the big stars, sets up the storylines and gets the crowd pumped for a rowdy year of wrestling.

This is a longer tournament that takes place over a number of months leading up to the final event at the home of NJPW, Tokyo Dome. It’s a round-robin style competition and one which most of the season is based around. It’s also NJPW star Juice Robinson’s tip for where to start. He explains that the G1 “sets up the story for Tokyo Dome, and by then you’ll be hooked.”

The best thing about this tournament is watching your new favorite fighter battle it out for the crown. According to Robinson, “Whether he succeeds or fails, that five-six months is where things all start. From there it resets, builds up to the G1 again, goes through Wrestle Kingdom and starts again.”

As mentioned already, Tokyo Dome is arguably the center around which the Japan pro wrestling universe revolves; however, there are a number of other very reputable venues that host shows throughout the year. Some of the other main venues across the country include:

Korakuen Hall: Situated next to Tokyo Dome, this more intimate venue houses about 1,500-2,000 fans on a full wrestling night. Because it’s smaller, the energy in this space is particularly electric, with every “oooh” and gasp reverberating off the venue walls. It’s a legendary space, which since its opening in 1962 has regularly hosted a broad selection of boxing, professional wrestling, kickboxing and mixed martial arts matches.

Nippon Budokan: Typically just known as Budokan, this venue in Chiyoda, Tokyo can hold about 14,000 spectators and is another Tokyo NJPW local. The indoor space also regularly hosts a broad variety of sports throughout the year.

Osaka-jo Hall: One of the main NJPW homes in Osaka, Osaka-jo Hall is suitable for about 16,000 punters, making it great for some of the more blockbuster-style shows held here. When it’s not hosting NJPW, the hall is often used for a number of sports events and live music shows; in fact Britney Spears, Whitney Houston, Prince, David Bowie, Björk, David Guetta, Justin Bieber, and Ed Sheeran have all performed here. Read the best ways to get from Tokyo to Osaka.

Kobe World Hall: With a maximum capacity of 8,000 people, this multi-purpose arena has an excellent element of blockbuster-style energy but is still compact enough to feel up-close to all the action. During wrestling off-season the venue hosts concerts, trade shows and other sporting events.

Uonuma Horinouchi Gymnasium: Located in Niigata, this is one of the best in terms of more “country” venues. The venue is small (around 1,500 people), but the excitement and passion for wrestling sure isn’t. Read the best ways to get from Tokyo to Niigata.

Online: Okay, so it’s not really a venue, but if you can’t make it to a match in real life, you can sign up for the next best thing: streaming. Since the end of 2014, NJPW has been running NJPW World—a subscription-based video streaming service. The online network hosts live streams of primary events and features a seemingly endless video library of historical NJPW television events.

Today’s biggest stars in the world of Japan pro wrestling

This is very subjective and thanks to the fluidity and fast pace of NJPW, it’s something that can change almost overnight. However, if you’re looking for a few names to follow consider these guys:

Kenny Omega is a blonde, curly-haired, Canadian-born, much-loved NJPW icon known to have the highest endurance thresholds in the tournament. He’s incredibly popular with Japanese fans, who cheer with wild ferocity at his every move, so if you see him on the bill, consider bringing earplugs.

In terms of international guys worth keeping an eye on, Juice Robinson is another hot tip. The US native made the move to NJPW in 2015 and since then his career, skills, and popularity seem to have just grown with every fight. Read our interview with Juice.

For a homegrown hero, keep a lookout for Kazuchika Okada, born in Aichi Prefecture; he’s a star in and out of the ring having (we’re told) featured in the video for Pharrell Williams’ feel-good hit “Happy”. An incredibly hard worker, Okada cut his teeth in the world of professional wrestling by working in Mexico before coming to NJPW.

Tokyo-born Tetsuya Naito has been in the wrestling world for almost 20 years now, having started his training back in 2000. Rocking a pretty powerful blunt-cut mullet, the only thing that’s more commanding than his (slightly questionable haircut) is his power in the ring.

There are a number of ways to snap up tickets for a Japan pro wrestling match and how you’ll go about it really just depends on what suits you best. If there’s a specific match you really want to see and there’s a chance it’ll sell out early, the best place to buy a ticket is either online via eplus, or at one of the convenience store ticketing outlets which you’ll find at Lawson (via Loppi) and Seven Eleven. You can find more info about Japan wrestling tickets here. Most tickets go for somewhere between ¥3,500–¥15,000, depending on the venue.

If you’re more of a “play it by ear” kind of person, the best place for you to consider is Korakuen Hall, near Tokyo Dome. As well as being relatively cheap in terms of pricing (the most expensive tickets here on average are ¥8,500, this venue sells standing tickets only available on event day for somewhere between ¥3,500–¥4,000. The tickets are available from the box office at 4pm on the day of the match, but it’s worth getting in line around 30-45 minutes early—by Japan line standards, that’s practically a millisecond.

We know this article is focused on male wrestling in Japan. Keep an eye out for a future article covering the women’s side of the sport.

All information in this article was, to the best of our knowledge, correct at the time of publication, but is subject to change.

Written by: Lucy Dayman
Filed under: Sporting Activities
Tags:
Sharing
Questions or comments about this article?
Start a thread on our community forum
Ask our local experts about Tokyo