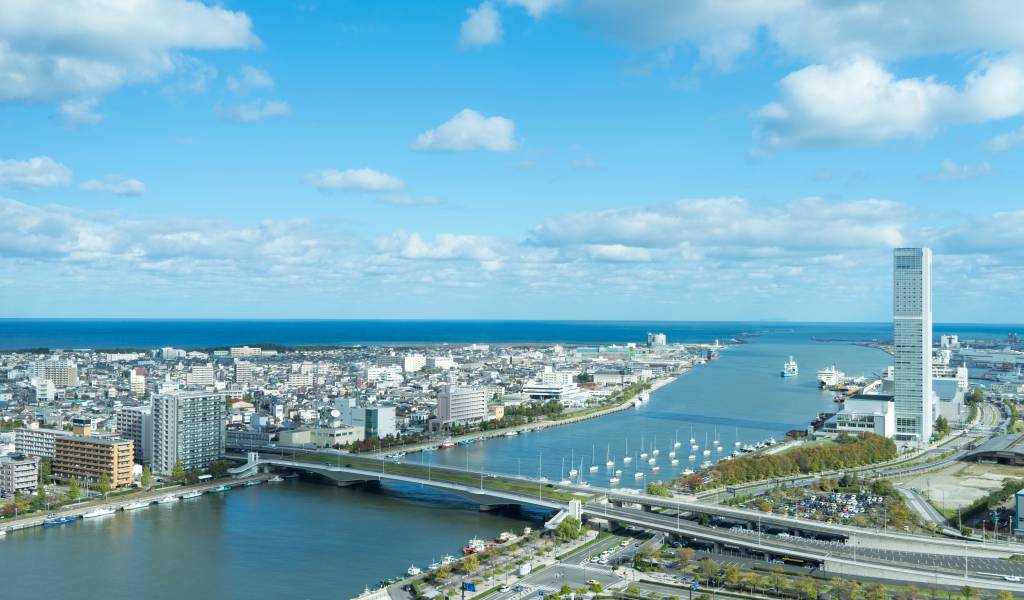 Tokyo to Niigata: The Fastest and Cheapest Ways of Getting There

Looking out onto the Sea of Japan and Sado Island, Niigata City is about 335km sharply northwest of Tokyo. The port city is a charming place, but so is broader Niigata Prefecture—in this part of the country, a full 25% of the land is given over to natural parks. Abundant trees and waterfalls aside, Niigata is also known for being the home of Fuji Rock Festival and a magnet for snow enthusiasts in the winter months. But, on the whole, the region is somewhat neglected when it comes to tourism. We’re not sure why that is, especially considering how easy it is to get from Tokyo to Niigata. If you’re thinking of visiting (and we really hope you are), these are your transport options (fast, cheap and everything in between).

Before we get into it, a quick word of cheapo advice: for travelers who are going to be doing any other domestic trips in Japan, buying a Japan Rail Pass is highly recommended, as it gives you virtually unlimited bullet train rides for 7 or 14 days. If you’re heading from Tokyo to Niigata, and then down to Kyoto or Hiroshima, for example, the pass pays for itself. Cheapo tip: take a look at this sample JR Pass itinerary that covers Niigata and Kansai.

If you’re planning just a jaunt to Niigata, a one-way Shinkansen ticket may prove a better bet. Of course, there’s also bus, plane and even local train—all detailed below.

Getting from Tokyo to Niigata is a short haul via the Shinkansen—it’s a two-hour direct ride. The route is served by the Joetsu Shinkansen, and your trains are called the Toki and Max Toki (with no discernible difference between the two models). These are both covered by the Japan Rail Pass (with no restrictions). There are 1-2 trains per hour, running from around 6am to 9:40pm.

In peak season (that’s usually spring and summer holidays, Golden Week and the New Year period), a regular one-way ticket costs about ¥10,770. Traveling in the off-season will save you a few hundred yen. If you’re not using a Japan Rail Pass, you can save some bucks (about ¥500) by opting for unreserved seating (jiyuuseki), but there is a risk you’ll have to stand the whole way—especially during peak season. With Japan’s tourism industry booming, even off-peak trains are often full—so if you’ve got kids in tow, are schlepping big bags around or are not so good on your feet, it’s highly recommended that you book reserved seats (shiteiseki). You can do that in advance at JR ticket offices.

It is possible to fly from Tokyo to Niigata—but there’s only one plane that goes that way each day. Your option is singular—an ANA flight that departs Narita at 17:35 and lands in Niigata 65 minutes later. Fun fact: the plane is a Bombardier DHC-8-Q400.

The return route is served by a daily flight at 14:40. Even if these times and costs work for you, with the airport transfers added in, the journey can be quite pricey and a bit of a palaver.

Flying to Niigata starts making a bit more sense if you’re coming from Osaka, Sapporo or somewhere further afield. The airport gets a few international flights from Seoul, China, Taiwan and parts of Russia.

A super-cheap way of getting yourself from Tokyo to Niigata is taking a highway bus. You can pick up a one-way ticket for as little as ¥3,000, but the trip takes about seven hours—so it’s not great if you’re just going for the weekend, or are in a rush. It’s also a lot of sitting-still time for youngsters.

Many of the buses leave Tokyo around midnight, reaching Niigata first thing in the morning. However, it’s possible to book daytime buses too. Check out Japan Bus Online to see what’s available from Tokyo to Niigata on your travel dates.

Fans of trains and slow journeys can combine the two during Seishun 18 ticket season. Timed to coincide with university holidays in Japan, this cheapo pass allows five consecutive (or non-consecutive days) of unlimited travel on local and rapid JR trains (nothing faster) for ¥11,850. You can split one pass five ways, giving a group of five people one full day of travel each for just ¥2,370.

If you happen to find yourself in Japan when the Seishun 18 tickets are available, and have a good deal of patience, you can use them to get from Tokyo to Niigata in approximately seven hours, with three transfers. Not bad! Without the Seishun 18 pass, the cost is roughly ¥5,620. You can plan your journey on Hyperdia—deselect everything but Japan Railways and local.

Summary of transport options from Tokyo to Niigata

By far the fastest, easiest and most convenient option is the Shinkansen, particularly if you have a Japan Rail Pass or need to get to Niigata quick. However, the cheapest option is usually a highway bus, followed by local trains—but these are more time-consuming (and sometimes uncomfortable) ways of traveling between the two cities.

If you’re happy paying some steep highway tolls, you could also rent a car and drive from Tokyo to Niigata. Unless you’re traveling in a group, though, it doesn’t work out to be super efficient or economical. Trains and buses win.