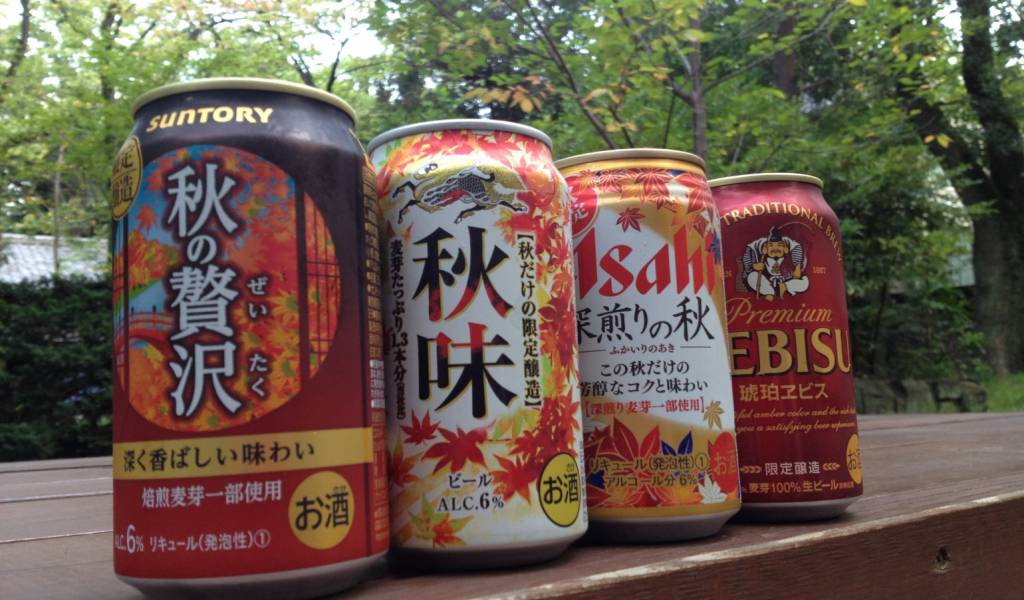 Japan has four seasons. You probably knew that already, but it really is a big deal – especially when it comes to the major beer producers pushing their products. Zythologically speaking, (yes it’s a word) autumn brings about some of the more interesting brews as the light golden lagers of summer give way to the darker malts and higher alcohol content that suit the cooler weather.

So, does that mean they’re all worth trying? Well, you can decide based on our purely subjective rating. Note that the rating is based on taste, aroma, appearance and mouthfeel – you can do the price calculations yourself.

Aki no Zeitaku pours a lovely amber with a sudsy foam head. It contains a portion of roasted malt which adds a little more nuttiness and flavour than the average beer. It’s a lot tastier than the average Happoshu (technically under Japanese regulations this a liquer) but next to an actual amber ale, the added carbonation gives it’s a bit of a thin taste and it’s not as rich as it looks. Good value for money though.

Unlike the Asahi and the Suntory, this is a regular beer so it comes in around 80 to 90yen more per can than its tax dodging cousins. It’s also not very adventurous. The style is a lager with conventional malt and hops. It does have some corn starch and rice in it which is what gives the beer a clean, light taste while raising the alcohol content. Apart from the higher ABV there’s not much to set it apart as a particularly autumnal beer apart from the autumn leaves on the can. The writing on the can exalts that it has 1.3 times the volume of malt as the average Kirin beer but it seems they’re using their conventional malt as the taste is nothing special.
If you like regular Kirin and you want to observe the changing of seasons in the Japanese tradition, then it won’t hurt to buy this beer. Otherwise, try a darker malt beer for that rich autumn flavour.

The Asahi autumn offering is, like the Suntory, a ‘near beer’ concoction classed under Japanese tax laws as a liquer. To give a slightly more distinct taste, the brewers have added wheat to the mix. This definitely adds to the body and helps to overcome the added spirit alcohol and carbonation. Despite the name (fukairi means roasted) the beer contains only a small portion – just enough to add a touch of flavour without alienating Asahi’s core market of office workers who like their beer cheap and boring. That said, I’d rank this above both Suntory’s effort and put it on a par with Kirin’s beer.

Yebisu beer (the y is silent) is usually the choice of drinkers who don’t know much about beer, but think paying a bit more puts you in a different class of drinkers than someone sipping on an Asahi Super Dry. In case you didn’t know, Yebisu beers are premium in price only – there’s really nothing special about them. Now that I’ve rubbished them, forget all that because Amber Yebisu is outstanding. True to the Amber Ale style, this beer has a beautifully rich taste and more hoppy bitterness than the average mass produced brew. Overall the balance is lovely with Yebisu stamping their big brewery boots around in craft brewers territory. It’s also quite accessible, so if dry hopped IPAs that taste like they’re made of grass clippings aren’t your thing then Amber Yebisu is not going to challenge your world view.