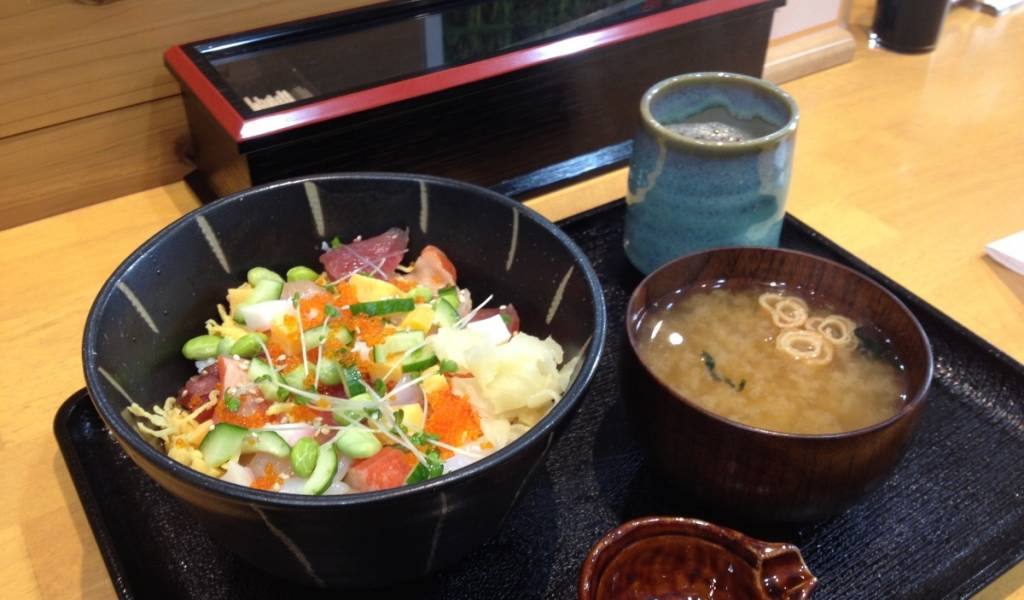 Ginhachidon - Seafood Donburi for the Masses

On a recent lunchtime stroll down the marvelously cheap Sakae Dori – a narrow street of small restaurants, bars and cafes that atarts just outside Takadanobaba Station – the newly opened Takadanobaba branch of Ginhachi-don caught my eye with banners offering seafood donburi for 490yen. Anyone who has spent more than a few days in Japan quickly discovers that these simple bowls of rice with various toppings are one of the cheapest and most ubiquitous nourishments available.  Threads of seasoned beef are the most common toppings at places like Sukiya, Yoshinoya and Matsuya.  Seafood donburi on the other hand is usually the preserve of restaurants and sushi shops – so scoring a bowl for under 500yen is an excellent deal.

The menu has about 16 different types of seafood donburi on the menu with prices ranging from 490yen for the ‘Otoro, Salmon, Negitoro-don‘ through to 980yen for the Hokkai-don (North Sea donburi). Other offerings include a negitoro and avocado-don and the simple classic maguro-don.  I went for the Seafood Hana-chirashi don for 580yen – a dish you might find available for lunch at your typical sushi shop. 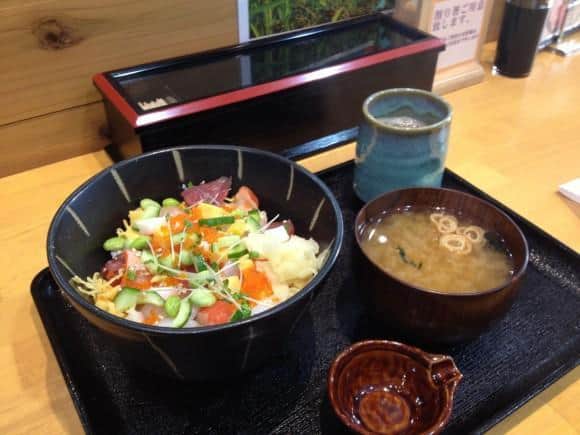 The menu claimed that this donburi had 10 different neta (toppings). The ones that I could identify were fresh cucumber, prawn, salmon, edamame, squid, ginger, maguro, egg, kamaboko (fish cake), sprouts, salmon roe and sesame seeds. The combination of crisp, fresh vegetables and seafood of different textures mixed with a light soy sauce was very good. Perhaps not quite as good as you’ll get at a specialist sushi shop but at 580yen it was excellent value.

The service too was friendly and efficient with two long bars stretching almost the length of the shop with a narrow gap in between for the server to deliver meals and clear away dishes.  If you feel like stuffing yourself with carbohydrates, you can upgrade to large size oomori rice for free.  Another nice touch was pouring cups of steaming hot tea as customers came through the front door so that it was in their hands as soon as they were seated.

Including the recently opened Takadanobaba branch (you won’t find it on street view) Ginhachidon has four branches around Tokyo. You’ll find the other branches in Ningyocho, Ginza and in Hongo – right outside the main campus of Tokyo University.