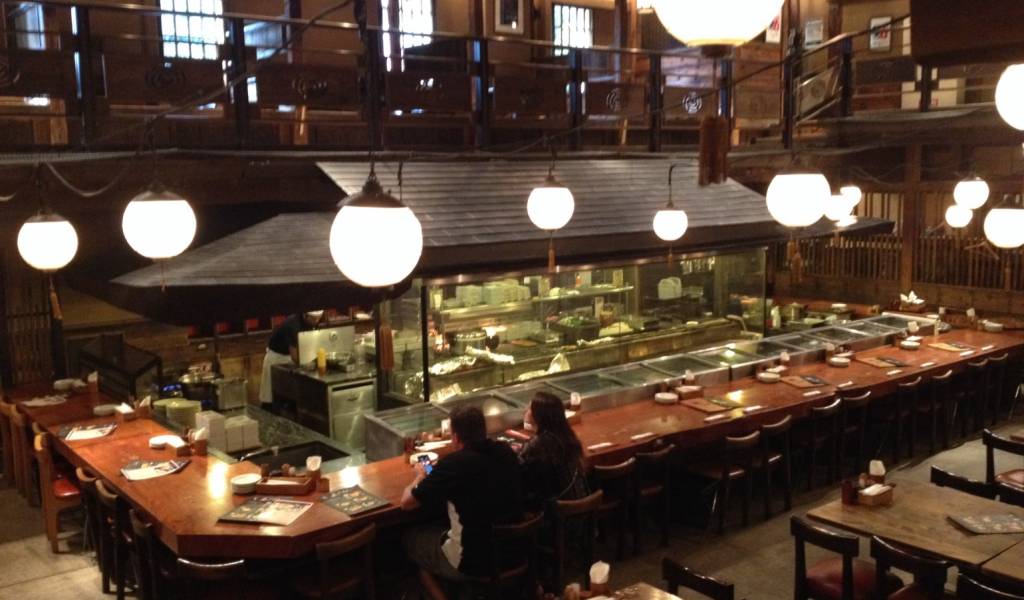 It’s not really a big surprise that Gonpachi inspired the restaurant in Quentin Tarantino’s Kill Bill, since Gonpachi is basically a Japanese themed restaurant in Japan. For me, the surprise is that this hyper produced eatery is actually reasonable value for lunch. If you’re in the Roppongi area or you’re playing cheapo tour guide to some guests from overseas for a day, then a stopover at Gonpachi is well worthwhile.

Located in the shadow of the overhead expressway, on the corner of Roppongi Dori’s Nishi Azabu intersection, the exterior of Gonpachi looks like it dropped straight out of Edo era Japan. Inspired by a kura (Japanese warehouse) it’s actually a purpose built structure. That’s important to remember – this isn’t about authenticity, it’s more like a theme park.

Former Prime Minister Koizumi brought George W Bush here during a state visit, so the first thing you’ll notice as you enter is all the photos of famous people who wanted to eat at the same place as Dubya. You should realise at this point that Gonpachi is VERY foreigner friendly. In fact, visitors and local expats usually out number locals.

Once through the entrance, the interior is cavernous, with seating around the central food preparation area and in booths around the edges – spread over two floors.

While dinner sees regular (if not slightly high) izakaya prices, lunch is an altogether more reasonable proposition. Don’t expect a taste sensation though, Gonpachi is as much about the experience as the food with waiting staff and cooks boisterously welcoming diners and raucous tsugaru jamisen music playing through the sound system.

The lunch menu sets range from 850yen to 1,050yen. All sets are served with salad, pickles, miso soup and tea.

The lunch menu and prices at the time of our visit were as follows.

In an effort to be foreigner friendly, they also hire plenty of foreign waiting staff – which may possibly be a frustrating experience for any Japanese in your group, as not all are fluent in Japanese. As long as you’re just there for lunch you should be fine, but when I’ve been there in big, diverse groups, they’ve struggled.

Although the Nishi Azabu branch is the most famous, Gonpachi has locations in Shibuya, Ginza and Odaiba.