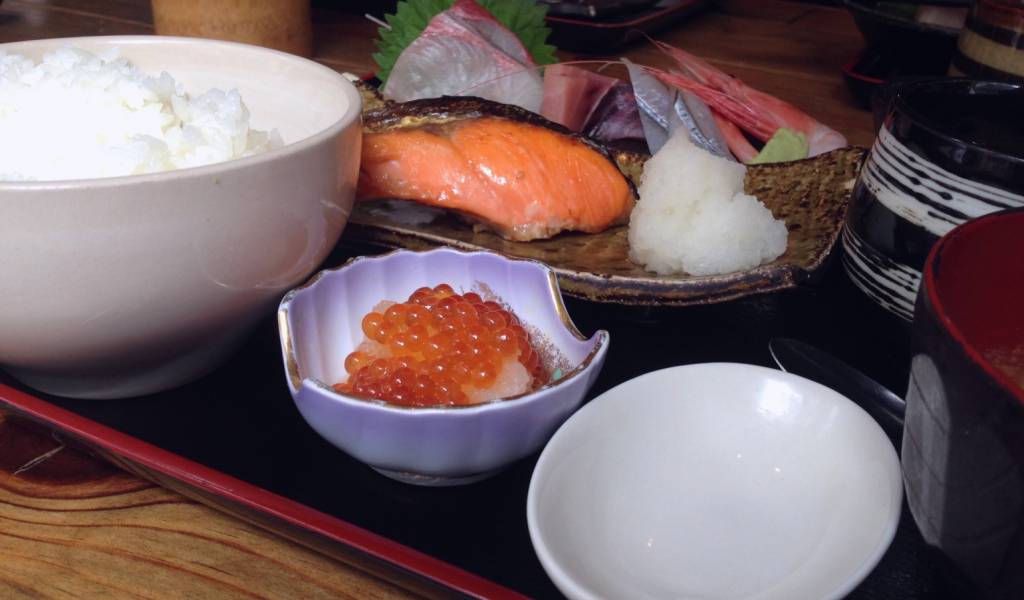 Isari Juu Hachiban is one of those restaurants that hides in plain sight. Unless someone tells you to take note, you would walk right passed it. It’s second-storey position and difficult-to-read name make it a less than obvious place to stumble into.

The name in Japanese is ‘漁十八番’. That mysterious first character (at least to a semi-literate Japanese reader like me) means ‘catch’, so the name of the restaurant means “Catch No. 18”. We’re not sure of the significance of the number 18, but perhaps it shows they’ve had a bit of practice before producing this cheap, cheery, good value seafood restaurant.

The interior is light and tightly packed with lots of light stained timber – like a harbourside shokudo look which is very close to becoming a cliche. The lunch menu consists of 8 different sets ranging in price from 500yen to 1,000yen – including consumption tax. While all the sets are basically fish, soup and rice based, the sets at Isari are special due to both the volume and variety of fish.

The Umi no Minshuku set was truly varied with grilled salmon, sashimi, ikura (salmon roe), squid shiokara, some kind of dried shirasu, chawanmushi (with a prawn at the bottom instead of chicken) and tamagoyaki served with rice and miso soup. The ingredients were good quality and the salmon was a good sized portion and grilled to perfection. If you haven’t tasted it before, the taste of the shio kara can be a bit overwhelming, but it provides a nice contrast in texture to the other ingredients.

Overall, Isari No. 18 is highly recommended if you want slightly more than the usual slab of fish, bowl of soup, pickles and rice.