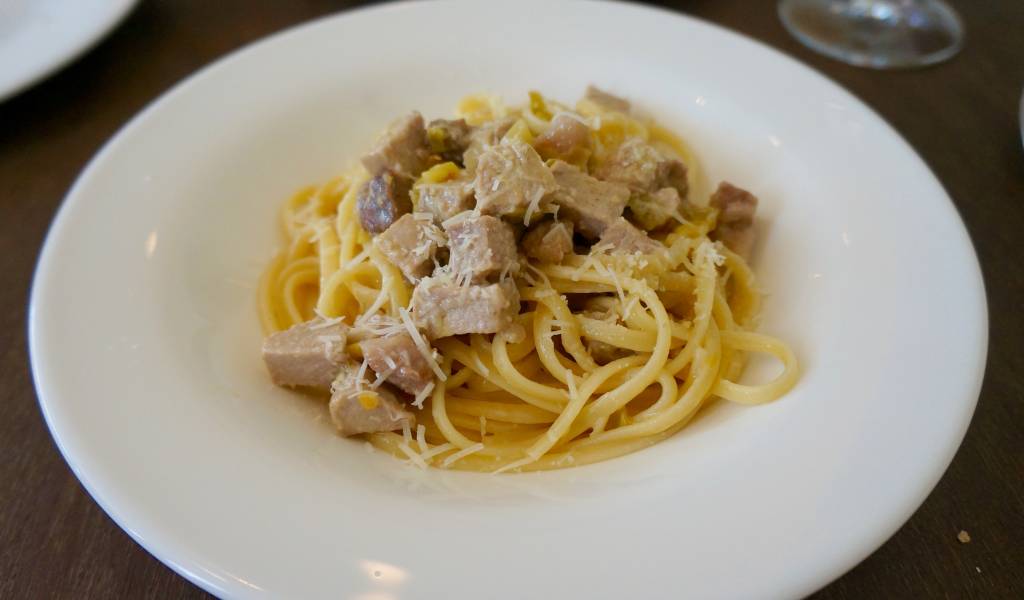 Pasta is one of the world’s greatest comfort foods.  From patiently cooking sugo for hours on the stove to having your first bite of perfectly al dente spaghetti, pasta is a meal that truly satisfies due to its deceptively simple combination of carbs and protein.  But of course known to anyone who has ever tried to make tortellini or pici from scratch, it takes both time and repeated practice to create silky-smooth pasta that has so much flavour that it can’t possibly be overshadowed by the sauce which binds it.

And it’s not just the taste of pasta which has resulted in its worldwide popularity.  Within the public imagination, pasta and Italian food have come to symbolise values of family, romance, and lack of pretension.  It is neither a finicky fish stew nor a plate of Brussels sprouts that the canine Lady and Tramp share on their ‘date night’ in the Disney animation of the same name; instead, ‘amore’ comes to mean – literally and figuratively – spaghetti and meatballs.  Highlighting the corruption inherent in the justice system and the strict hierarchy of the Mafia, the mobsters in Goodfellas cook up an Italian feast of pasta, bread, and wine while serving time in jail.  Even Japanese films have taken up this trend.  In Tampopo, it begins as a lesson in the art of eating spaghetti.  One woman instructs a group of younger women on how to eat spaghetti in a way befitting of their gender.  They do as instructed, but only to be interrupted by a man sitting across from them in the restaurant slurping through his meal with great gusto.  In the end, convention flies out the window in favour of pure enjoyment.

It’s fair to say, then, that pasta is a near universally loved food.  Japan is no exception, with restaurants often putting their own spin on staples of Italian cooking with creations like spaghetti ‘naporitan’ and pasta mentaiko (salted cod roe).  Michelin has also taken note of the high quality Italian fare of Tokyo by awarding an impressive 79 stars to this cuisine in 2015 (64 Bib Gourmands, 15 one-star restaurants).  And so, I tried Antica Trattoria Nostalgica, a one-star Michelin restaurant billed as a place serving food reflecting ‘good old-fashioned Italian cafeterias.’  I was told to ‘Expect courteous service and an appealing lively atmosphere’, too.  My experience of Antica Trattoria Nostalgica was wide-of-the-mark on all three counts.

The lunch service at Antica Trattoria Nostalgica is either a one or two course meal, with each including an appetiser plate and bread.  One course (pasta) will set you back 1,200 yen, whereas the two course meal costs 2,400 yen (pasta and meat).  My dining partner and I went for the latter option.  Dessert is not offered as part of the lunch service.

The appetiser consisted of three parts: rucola lightly dressed in olive oil, cannellini beans with diced tomatoes, and risotto with littleneck clams.  There is little to say about these apart from their being rather ordinary.  Had the rucola been tossed in a light vinaigrette, or the risotto been finished with some shaved parmesan, then perhaps it would have been a different and more positive result.

Given my lengthy tribute earlier on in this article, you can probably guess that I am a bit of a fanatic when it comes to pasta.  I just can’t get enough of a robust sauce, sharp cheese, and toothy, flavoursome linguine/spaghetti/fettuccine/you name it.  So I was rather excited to receive a bowl of linguine with diced lamb, lemon sauce, and parmigiano-reggiano.  With simple white tableware as its backdrop, my pasta looked near textbook perfect.  Shame about the taste, though.  The lamb was unfortunately dry and far too lean a cut for the dish, although the lemon sauce was light and fragrant.  The biggest disappointment, however, was the linguine, which was overcooked.

The second course fared better with both my dining partner and me.  It was a variation on the popular cacciatore, where the chicken is braised in a sauce of tomatoes, onions, wine, and herbs.  With this dish, I was reminded of home-style Italian cooking and its emphasis on high-quality produce used simply and effectively.  The dish was well balanced, having roasted zucchini and a creamy polenta as pleasant accompaniments to the chicken.

Although not entirely dissatisfied with my meal, my biggest concern about Antica Trattoria Nostalgica is its service.  If a restaurant is selected as part of the Michelin Guide, then its owner(s), chef(s), and wait staff should expect a degree of interest from foreign patrons.  With that expectation should come an acknowledgement that foreign patrons will have some difficulty communicating when making their order, try as they might to do so in broken Japanese.  More than this, if a restaurant is attempting to replicate the atmosphere of ‘good old-fashioned Italian cafeterias,’ then there should be some effort made on the part of the wait staff to explain things slowly, courteously, and perhaps even with a smile on their face.  Antica Trattoria Nostalgica would do well to rethink its treatment of foreign guests which, in conjunction with the austere surroundings of the restaurant, make for an uncomfortable dining experience indeed.