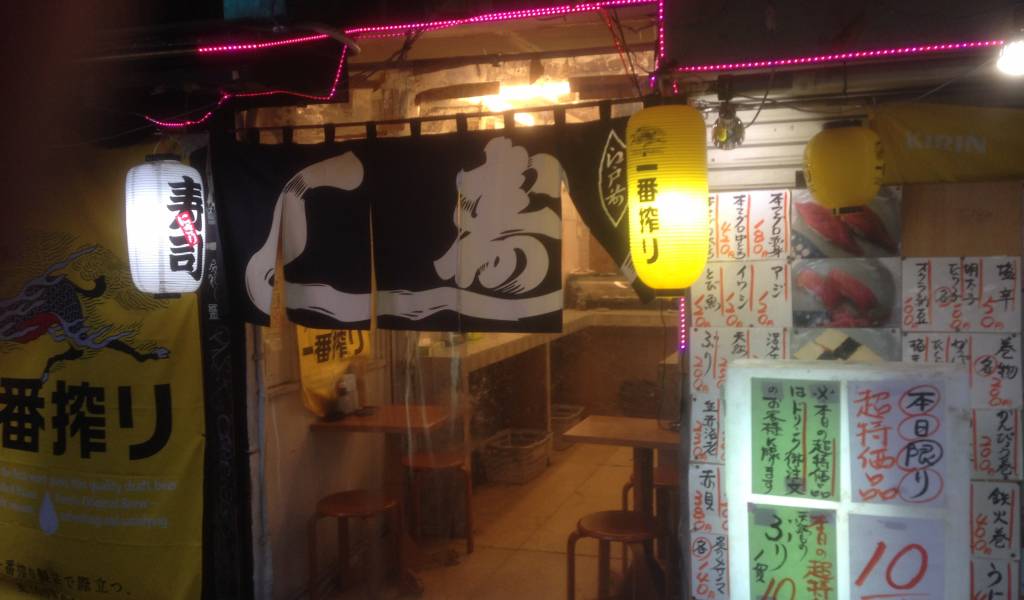 Tokyo Cheapo Investigates: 10-Yen Sushi at "The Restaurant With No Name"

What can you buy in Tokyo with 10 yen? Nothing, nada, zilch? Wrong. You can buy a single piece of yellowtail nigiri at a Yoyogi sushi joint so confident in its business plan that it has declined to even give itself a name—a place we’ll now be referring to as The Restaurant With No Name. At least, those were the excited whispers we’d heard on the sushi grapevine.

To find out if the rumors were true or merely malicious, cheapo baiting lies, we sent a crack team to investigate the mystery of the 10-Yen Sushi at The Restaurant With No Name.

The various maps and riddles we’d been supplied with to find the place led us to Yoyogi Station. We entered the streets though the West Exit, rounded the corner to the right and after no more than a minute, there we were, right outside a place we feared was just folklore: The Restaurant With No Name.

Despite its lack of a name, the place is pretty difficult to miss. The outside is plastered with bright signs and  pictures, a couple of lanterns and a curtain across the entrance simply reading “sushi”. The restaurant itself is little more than a small, narrow room with a counter at one end, two tiny tables and counters along the walls for standing and eating. The walls are also where you’ll find the menu, if, that is, you can read Japanese. There’s next to no concession to English speakers at this place, though this shouldn’t be a problem as there are pictures to point at and fingers to count on.

There’s only ever one guy behind the counter, who we take is the owner and manager. Once you’ve made your order, he’ll start prepping your fish right there in front of you and hand it straight over when it’s done. Of course, this guy is also The Keeper of the 10-Yen Sushi.

And there it was, what we came in search of, the cheapest yellowtail (buri) nigiri you’re likely to find on planet earth. So cheap I’d wager you have enough money for a decent meal down the back of your couch or in an old pair of trousers you don’t wear anymore. The quality was surprisingly high, with the rice fresh tasting and the fish soft and flavorful. It probably won’t be winning any awards in a hurry, but you could easily pay five times the asking price and still feel you were getting a bargain.

It is at this point, however, that we bring you the sad news that there is one small caveat. You have to catch, skin and gut the fish yourself? Not quite. The fish is made in a laboratory using depleted uranium and sawdust? Hopefully not. The catch is—wait for it—that you must also buy a drink. We went for beer, which came in at a pretty standard 500 yen. So, I think we can agree, it isn’t the end of the world.

Not wanting to just roll up, order the cheapest thing on the menu, take a bunch of photos and leave, while there we also took the opportunity to try out some other menu items. Though not 10 yen cheap, everything else is also pretty damn cheap. They’ve got all the classics—shrimp, salmon, squid, roe, egg, etc.—plus plenty of options for the adventurous. We did, however, order some tuna without consulting the menu first and that turned out to be a little pricier than everything else, though delicious all the same. In total, having eaten upwards of 40 pieces of sushi and drank two beers, the final bill came to roughly 2,500 yen. No complaints here.

Cheaper than kaiten joints and a whole lot more characterful, The Restaurant With No Name certainly gets our seal of approval. If you want to check it out, just make sure you get there after 17:30 when it opens and, due to the size of the place, it’s probably best to avoid turning up in a large group.

Open with Maps
The Restaurant With No Name
1-35-1 Yoyogi, Shibuya, Tokyo
Yoyogi
17:30 until the customers dry up
Written by: Jack Heslehurst
Filed under: Sushi
Tags:
Sharing
Questions or comments about this article?
Start a thread on our community forum
Ask our local experts about Tokyo