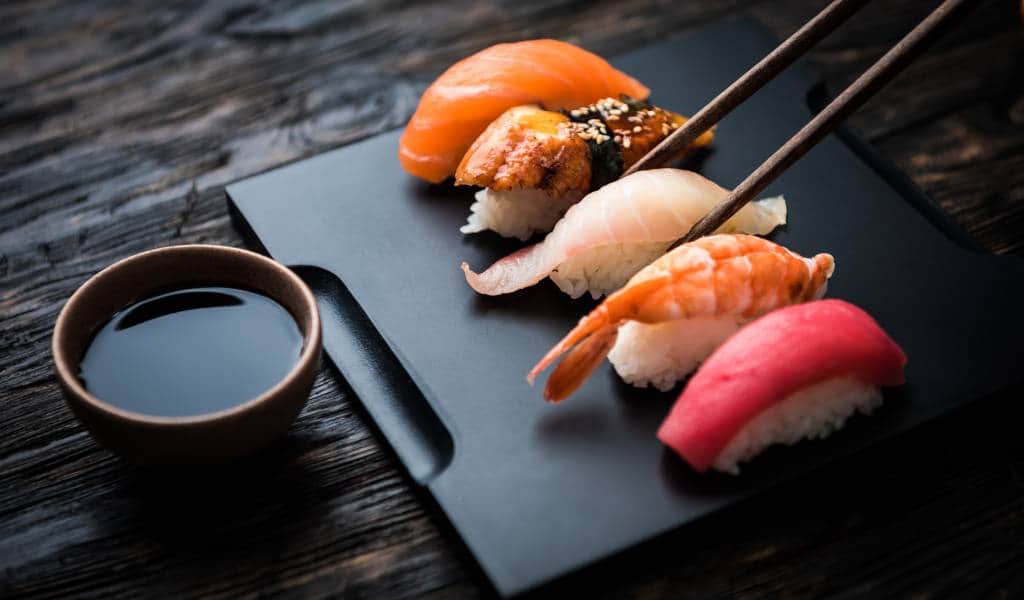 Sukiyabashi Jiro is a tiny restaurant in the heart of Ginza. It’s got three Michelin stars and has served raw fish to the likes of President Obama and Prime Minister Abe. A movie has been made about it. All the guidebooks recommend a visit. A meal costs a cool 30,000 yen. It’s almost impossible to get a reservation (you can book a seat at his son’s restaurant, though). But luckily there are over 5,000 sushi restaurants in Tokyo, many of them providing a luxury experience to rival that of Jiro. If you’re looking for something a little fancier than our budget sushi options, here are 4 (and a half) alternatives to the giant Jiro name.

Isshin is a restaurant that is best described as modest, despite the Michelin star it boasts. Fifteen minutes from Asakusa Station, Isshin serves up old-style sushi in a cozy atmosphere. Rice cooked over charcoal is their “thing”, and they’re also known for their abalone (in season). Lunch sets start at 6,000 yen.The chef and his wife are friendly and will make you feel right at home despite the language barrier. Reservations recommended to make sure you don’t miss out.

Sushi Kanesaka is all about balance—both in the taste of their sushi and the aesthetics of the restaurant. They’re also all about entertainment—you sit right up close to the chefs and get to watch their “live dance performance” (their words, not ours—see the website) of sushi preparation.  It may sound cheesy, but once you’re there and feasting, it will make sense. Lunch at this Michelin-starred place starts at 5 000 yen and dinner 20 000. Make a reservation to make sure you secure a spot – and if you’re staying at a hotel, ask the concierge to do it (that’s what the restaurant requests to avoid losing money on cancellations).

Tokami is a classy spot, with one Michelin star. It’s run by chef Hiroyuki Sato, a friendly chap who handpicks the sushi ingredients to ensure they’re top notch, and can tell you all about it in fluent English. He uses red vinegar to flavor the rice instead of the generic stuff, as it’s said to go better with tuna. Try it for yourself during lunch, which starts at 5,000 yen for 10 pieces. Dinner is 18 000 yen and up. Reservations most certainly required – this place is small!

And then there is Saito—Tokyo’s (not-so) secret sushi gem. It’s got an impressive three Michelin Stars and is consistently ranked in lists of Tokyo’s top restaurants. The owner is nice, the rice perfect, the fish out of this world. It will set you back at least 10,000 yen for lunch, but it’s an experience you won’t forget. Reservations for the nine-seater restaurant fill up months in advance, so get in there asap.

Ok, so it’s nowhere near as classy or sophisticated as the other four entries, but Tama Sushi is a good option to keep in mind. It’s a big step up from the standard conveyor belt fare, but isn’t going to melt your credit card. The fish is super fresh; hauled over from the market and served up from between 1,200 – 5,000 yen. You can get a jolly good, filling lunch platter for 2,000 yen or less, and it generally comes with soup and chawanmushi (an egg dish) or dessert. They also have a range of interesting fusion type foods. Oh—and their hand rolls are to die for. Try one, seriously. Cheapo tip: they’re only 100 yen on the 8th of the month.

Uogashi Nihon-Ichi is a standing sushi bar offering high-quality sushi. The dishes on offer use seasonal and superior ingredients (relative to some conveyor-belt joints), but the atmosphere is relaxed (the no seating definitely helps this cause). It’s a chain with branches around Tokyo and in central areas like Shibuya and Shinjuku, so it’s great for people on a tight schedule, but who still want a tip-top meal.

** A word of advice: If you aren’t so flash in the vernacular, ask a Japanese-speaking friend to be on standby for reservation-making, just in case. Just because a restaurant advertises its English ability doesn’t mean that the staff member who answers the phone will be fluent.**

Not into splashing out for sushi? Try the 10-yen sushi restaurant instead.

Disagree with any of the above or got any other sushi recommendations? Leave them in the comments!