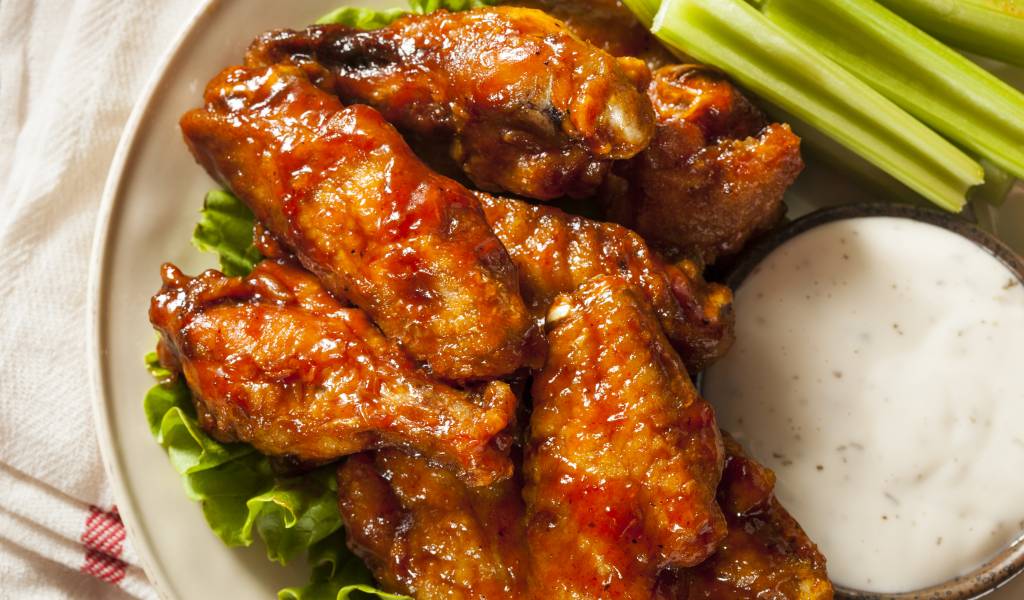 Not All Skin and Bones: Chicken Wings in Tokyo

Permission to read the word “wings” as “wangs”? Permission granted.

Few things spell satisfaction like gnawing on chicken wings and leaving behind a little pyramid of bones, like a less ambitious Genghis Khan. Fortunately, Tokyo has some great options for fellow acolytes of the wing.

Japanese-style wings (tebasaki) are usually a crispy-fried affair, with a light but super flavorful sauce. Karai (spicy) is the standard. It’s a tangy, slightly spicy flavor that relies on pepper rather than chilies for its heat. There’s often an extra spicy variant too, which is more or less the same sauce with more pepper. The same goes for the amaguchi (sweet) variant, which lacks the flavor of its spicier counterparts, and can be a little sickly in large doses.

Probably Japan’s most famous option for chicken wings, with 69 stores across the nation. Their mascot seems to be the result of some unholy union between man and chicken. It’s not clear whether he’s encouraging diners to eat his own wings or the wings of his brethren, but he looks happy with his life decisions.

The vibe is lively, casual and affordable, at ¥450 for five wings. Mabaroshi no Tebasaki, their ultra-crispy signature chicken wing is the franchise’s flagship product—and with good reason. It’s common to see towers of up to 50 wings being bused to expectant diners. According to their website, the chicken wings are the “treasury of collagen”, associated with strong bones, healthy skin and anti-aging properties. Sounds like good science to me.

If you’re looking to add a touch of class to your experience, you can’t go wrong with Toriyoshi. The Kichioji 4th location is especially nice, with a tranquil outdoor seating area and a maze of modern Japanese private booths inside. The food doesn’t disappoint either—the regular wings are absolute flavor bombs. Happily, despite the rather upmarket premises, the prices are very reasonable at ¥480 for five wings.

Japan doesn’t always have the best track record when it comes to faithfully replicating Western foods (looking at you, mayonnaise pizza). Fortunately, Japanese chefs need no instruction when it comes to fried chicken! And while the classic US-style, red-hot buffalo sauce isn’t the norm here in Tokyo, there are a few well-known hotspots for us junk-food aficionados to get our fill.

If you’re not afraid to feel like a creep, it doesn’t get much more American than Hooters, which boasts branches in Shinjuku, Shibuya, Ginza and Akasaka. More famous for its scantily clad workforce than its food, I was surprised to learn the buffalo wings are pretty darn good. Hooters is also the only place in Tokyo I’ve seen selling “boneless wings” if that’s your jam—as far as I can tell though, they’re just fancy chicken nuggets. Just like in the US, Hooters also regularly hosts viewing parties for American sports. Prices start at about ¥1,000 for six wings.

Azabu puts a slightly more Japanese spin on buffalo wings, with nine sauces to choose from. To my tastes, the good old-fashioned original and hot sauces were their strongest offering. I wasn’t brave enough to order their “black dragon” heat level. Their most popular sauce, BBQ, seems to be aimed at Japanese palates—so expect more garlic and soy overtones than most American versions. Six pieces (not full wings) come in at ¥980.

There’s also a big screen, which for some reason was playing close-up shots of Asian giant hornets’ nests when I visited. I presume it’s usually used for sports . . .

If buffalo-style is where your wing game ends, you’ve got some catching up to do.

Unlike some buffalo wings, where the skin can go rubbery, your Korean wings are likely to arrive super crunchy, even when drenched in sauce. And what a sauce. Yangneom chicken provides the gold standard, covered in a heavenly sweet and spicy gochujaang (fermented chili paste) and sesame-based sauce.

With much more variation in the sauce, breading and cuts (you’ll often see the occasional drumstick thrown in, for instance), it can be hard to know what you’re getting into with Korean wings, but it’s well worth the uncertainty!

You can’t really go wrong when in Shin Okubo—every other building seems to be a fried chicken joint trying to tempt you in. While TV screens are usually all around, don’t expect to see sports being broadcast. They’re usually reserved for K-pop hits. For more ideas on what to do while you’re in the neighborhood, check out our dedicated Shin-Okubo guide.

If you’re not much of a gambler and you’re keen to stay on well-trodden ground, both Nandaimon and Hosigi are great options. They’re usually pretty busy, but with three floors each, it shouldn’t take long to get a seat. Hosigi’s original sauce is on the sweet side, so if you’re a chili fiend, consider dabbling in their hotter variations. Portion sizes tend to be large, but it keeps surprisingly well—so don’t hesitate to overorder and ask for leftovers to go!

Sports. K-pop. A hornet’s chewing mandibles. Whatever you’re looking for, when it comes to wings, Tokyo’s got you covered. So bring company. The more the merrier. Work together, grow through adversity, and as you do, build that tower of bones tall and proud! After all, what other cuisine allows you to construct a grotesque shared monument to your own friendships?

Open with Maps
Written by: Felix Wilson
Filed under: Eating & Drinking
Tags:
Sharing
Questions or comments about this article?
Start a thread on our community forum
Ask our local experts about Tokyo