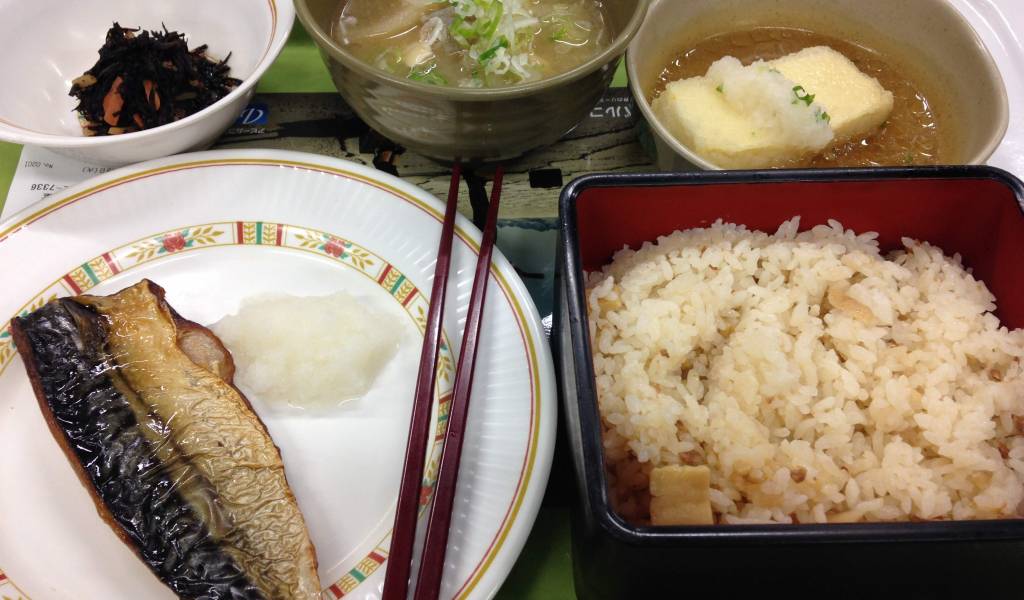 Here’s a tip for those who want a filling Japanese meal on the cheap: try visiting a university cafeteria. Most university grounds, and thus, their cafeterias, are open to the public (although when in doubt, it’s best to ask). Forget the stigma often associated with cafeteria food. Where else can you get a lunch set (teishoku) for as low as 410 yen, or ramen for 360 yen? While expecting Michelin-quality food is out of the question, these school lunches are tasty, inexpensive, and possibly even healthy, as you get a balance of meat, carbohydrates, and vegetables. Since it’s a cafeteria, service is also quick and efficient.

Let me introduce the Chuo Refectory, one of the cafeterias at Japan’s number-one university, the University of Tokyo. The cafeteria is located underground, so it’s easy for its entrances to go unnoticed. Take the downward-leading stairs you’ll see near Yasuda Auditorium, the famous clock tower that’s an icon of the university, to enter the Chuo Refectory. You can order at the counter or at the ticket vending machines.

The dishes of the day are displayed with their names; however, the signs only translate the names of the sets, which non-Japanese speakers may find inconvenient and not very helpful. For those with dietary restrictions, though, the signs do come with illustrations such as that of pigs or seafood. That means that you’ll at least get an idea of what’s in the food.

Set meals cost 410 yen-600 yen, and the menu varies regularly. The lunch menu may also be slightly different from the dinner menu, as a set called “Deluxe” is offered for dinner. The cheapest meal set tends to be the aptly-named Economy set, while the most expensive tends to be Wa-Tei, which refers to typical Japanese fare (as distinguished from the other sets, which may not necessarily feature Japanese food, instead having generic fried food or yoshoku, Japanized foreign food). All set meals come with miso soup, as well as a side dish or two.

The cafeteria also offers curry rice, soba, udon, and ramen. There’s currently only one pasta dish: carbonara. Side orders such as fruit, croquettes, or tofu are available.

If you want to try something unique, I recommend the Akamon ramen. Yes, this cafeteria has its own signature dish, and it’s named after the university’s famous Akamon (red gate), which was built to celebrate the wedding of a Tokugawa shogun’s daughter and a feudal lord’s son.

The Akamon ramen is unlike your typical ramen – in fact, one look at it and you wouldn’t think that it’s ramen, as it looks more like some twist on spaghetti. Instead of broth, you get a thick, red, spicy sauce with ground pork, mushrooms, and bean sprouts. At 400 yen (or 340 yen for a half order), you get a large bowl of noodles swimming in that spicy sauce, and what’s even better is that you can’t find this ramen anywhere else.

If you want to make your own Akamon ramen, the university co-op, which is close to the Chuo Refectory, has a souvenir section where you can find the Akamon ramen sauce (noodles not included, though). It’s a popular souvenir that visitors to the university tend to take home.

The Chuo Refectory is open from 11am-9 pm on weekdays, and 11am-2 pm on Saturdays, Sundays, and national holidays. The University of Tokyo’s Hongo campus is about a 7-minute walk from Hongo-Sanchome on the Marunouchi or Toei Oedo Line, or Todai-mae on the Namboku Line. Be mindful of the fact that the cafeteria gets quite busy around 12 pm.

University of Tokyo Chuo Refectory
410 - 800 yen
Hongo 7-3-1, Tokyo
Hongo Ochanomizu
11am-9 pm on weekdays, and 11am-2 pm on Saturdays, Sundays, and national holidays.
Written by: Tiffany
Filed under: Cafés | Eating & Drinking
Tags:
Sharing
Questions or comments about this article?
Start a thread on our community forum
Ask our local experts about Tokyo