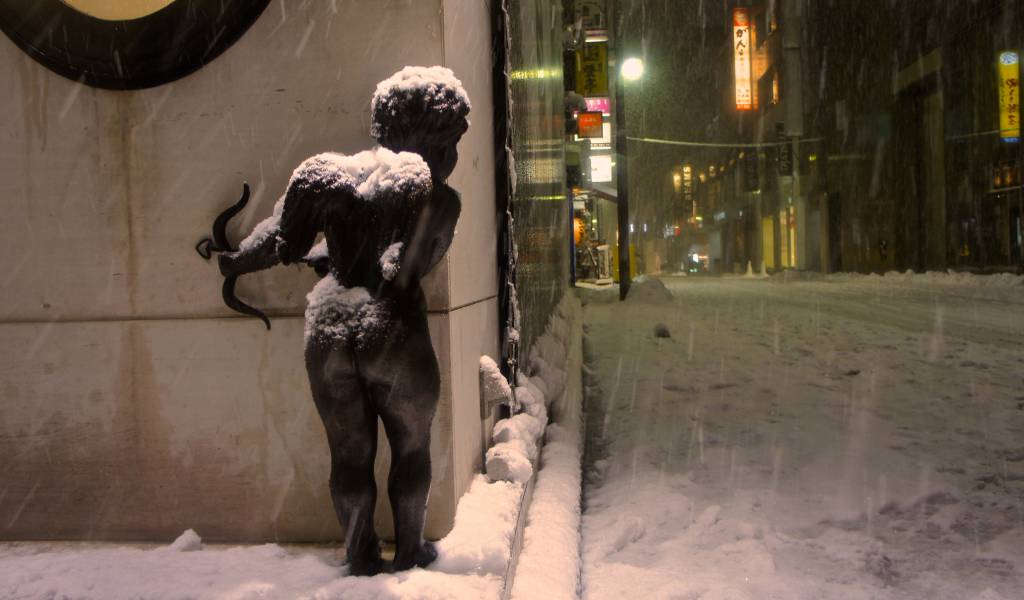 If you’re not satisfied with the rather restrictive Japanese “tradition”—more like a marketing ploy as far as cynics are concerned—of women giving men chocolates on February 14th, why not make things more romantic? Here are some ideas that are big on Cupid points, cheap and easy to put into action—just grab a red rose from the local flower shop and you’re good to go for Valentine’s Day in Tokyo.

See their eyes light up

After a nice (wallet-friendly) dinner, get some hot takeaway drinks and go for a wander, taking in the last of the winter illuminations together. If you missed them during the Christmas and New Year season, up until Valentine’s Day is your final chance to catch both the impressive Tokyo Dome City light fest, the Caretta Shiodome illumination and the ever-classy Marunouchi illumination.

Tokyo Tower also started an extra-magnificent ‘City Light Fantasia’ illumination (ongoing until April 23rd), so if you’re up for an extra-special Valentine’s Day date, this is the illumination to check out. The Tokyo Tower observatory deck uses a 360-degree projection mapping to show a futuristic Tokyo City with the ‘Future City Walk through’ as well as great views of current Tokyo in the ‘Night City Guide’. There are even cute photo-ops that use projections and stereoscopic images (whatever they may be). This is included in the admission fee to the main observatory (900 yen) but you do get the added romantic advantage of the Tokyo nightscape.

Whether you’re a veritable Asada in the rink or an absolute beginner, ice skating can be a fun date. If you’re broke, give your beloved a twirl around the Edogawa Sportsland Rink (that’s right, the cheapest option at 510 yen plus skate rental). Other venues that are a bit more expensive are the Yokohama Akarenga Rink, Tokyo Midtown, Akasaka Sacas (discount if you bring your own gloves—remember to tell your other half) and Toshimaen (which becomes cheapo-friendly after 3:00 pm). For more deets on these venues, see our ice skating guide.

Yes, you read it right—and this year Mensho’s delicious (honestly!) chocolate ramen is back, and fancier than ever! Carefully designed alongside a local chocolatier to match a rich dark chocolate with a pork-based broth, the dish is actually delicious. This year the recipe has smoked chashu, Kujo negi, black shoyu, garlic and chicken oil. The attention to detail and well-considered combinations make this a dish that transcends novelty, while still being a very unusual treat! This year the ramen is being served up at Menya Shono, Menya Shono Gotsubo, Mensho Tokyo and in Menya Shono LAZONA Kawasaki—but only until the 14th so be quick!

A stroll through beautiful, fragrant plum blossoms during the winter—how much more romantic can you get? Add a few snacks and a blanket/100-yen store ground cover, and you’re winning at this date thing. Yushima Tenjin, Ushi Tenjin, and Hanegi Park are spectacular spots, with festivals (tasty eats, amazake—a sweet fermented rice beverage—and more) to boot. It’s just mid-February, so the plums may not yet be in full bloom in most areas, but they should be more than mere buds by now! There’s no better way to say hello to spring with these plum blossoms, so read up on where to enjoy them here.

It might not scream sexy, but it’s novel, and will certainly test your dedication to each other. In past years, Valentine’s Day is one of the few evenings when you can walk/trot/haul your unfit body all the way up the outside stairs to the observation deck of Tokyo Tower (you usually have to take the lift). Once you’ve recovered, you can enjoy the night view of the city together. This year’s event takes place from 5pm-10pm (but will be canceled in case of rain or snow), and those who make it to the top get a certificate. It’s not much, but hey, it’s exercise, and they say that lovers that exercise together, stay together, so think of this as a fitness date!

Say it with chocolates

If you are set on the chocolate thing, we have two suggestions.  First, get your chocolate fix at one of the many Lindt Chocolat Cafes in Tokyo, as they’ve got some Valentine specials. Second, since chocolates will likely be discounted on the 14th, why not be a true cheapo and pick some up day of, or even simply push back your cocoa-filled celebrations to the 15th? Read about the chocolate-filled Japanese approach to Valentine’s Day here.

The west side of Ikebukuro is all geared up for Ikebukuro Valentine Fantasy, a series of events and attractions on the 11th and 12th between 11am and 4pm (so not actually on the day unfortunately), which includes stage shows, performers, food and chocolate stalls and outdoor heart-shaped installations light-up as part of a friendship event with the French city of Strasbourg (not quite Paris, but still romantic). Head to the West Gate Park that’s just a short walk away from the West Exit to check this Valentine event out.

And if Valentine’s Day just isn’t for you…

Bitter about all the lovey-dovey couples? In a relationship yourself but cynical about Valentine’s Day? Sick and tired of giving or receiving chocolate? If you find yourself hating Valentine’s Day for whatever reason, it’s a shame that anti-Valentine events haven’t really taken off in Japan. You could stick with mate-dates (they never expect anything from you if you buy them dinner and are way more likely to ask about your day). Or you could try holding your own anti-Valentine’s party: sing your heart out, wear black, or just continue life as if… well, as if it were a normal day!

If you’re single and looking, perhaps attending a gokon, or group blind date, might be the first step to a future romance. Or why don’t you hit the many bars and clubs in town? If you don’t want to deal with the language barrier, join the Meetup group that is Tokyo International Singles, as they have a number of singles’ Valentine events, but the details are only available to members.

If you’re a couple who aren’t keen on super-cute Valentine’s Day stuff or an dating someone new, here are some more normal date ideas in Tokyo. You can just treat it like any other weekend and go do something fun, like playing with cats at Nekobukuro (they have couple tickets all-year round)! And check out some of the events we’ve mentioned: after all, plum blossoms and stair-climbing aren’t specifically tied to Valentine’s Day in the first place, are they?