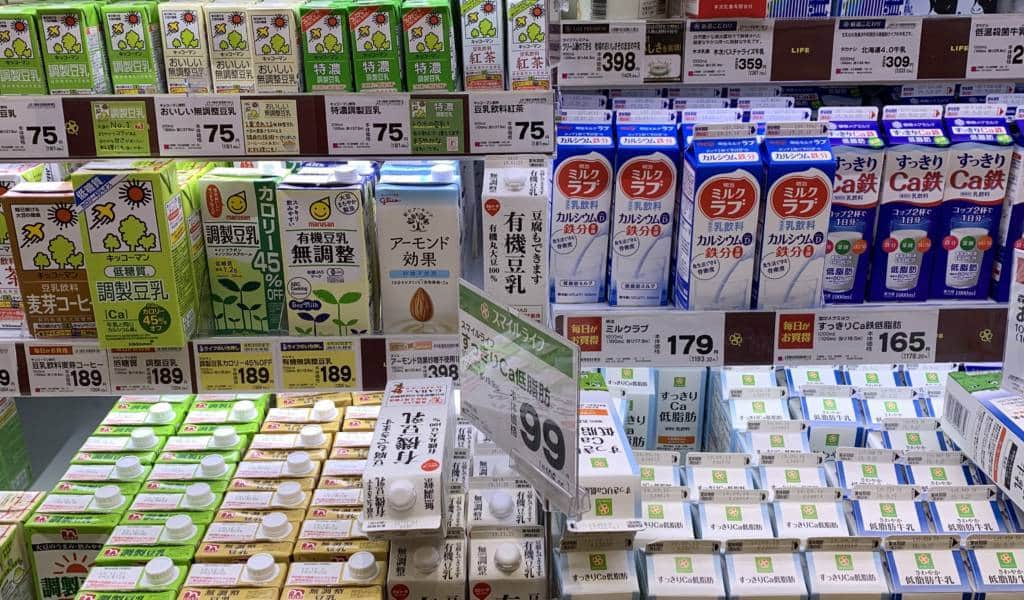 So you want to save some cash in Tokyo and cook in your hostel or Airbnb? Great idea seeing as constantly dining out in Japan can be a huge money drain. But how to ensure that simple pasta dish turns out just as you imagined it if you can’t identify even the most basic ingredients in the supermarket?

Affordable Japanese lessons Self-study is great, but isn’t for everyone. If you need structure, motivation, and actual speaking opportunities, Japan Switch offers great-value lessons, either online or at their school in Shinjuku. You can take group lessons for ¥1,500 or private lessons for ¥3,000 from certified teachers.

Grocery shopping in Japan if you don’t know Japanese

Grocery shopping in a Japanese supermarket can be frustrating if you don’t speak or read Japanese. But fret not; we got you covered with our guide to grocery shopping in Japan. This quick guide will help you to navigate supermarket aisles without a word of Japanese and lets you identify the most common staple foods and their names and kanji (the Chinese characters) in Japanese.

Eat your greens! Fruit and vegetables in a Japanese supermarket

Most supermarkets in Japan all seem to follow the same layout, so the first thing you’ll most likely see when you enter is the fruit and veg area. Thankfully, most items here are rather self-explanatory, as tomatoes, apples and avocados look the same in Japan as they do back home.

However, there are two things that some of you might be interested in: organic produce and produce from Fukushima.

A word about produce from Fukushima

You might want the former and not be comfortable with the latter, although official studies show that produce from Fukushima (the main thing are peaches by the way) is safe to consume and does not show unusual radiation levels. All produce in Japan must state the prefecture where it was produced. So, if you are freaked out by the thought of apples, milk or eggs from Fukushima, look for these kanji on the packaging: 福島県, meaning Fukushima Prefecture.

If you are into organic food, most supermarkets have a small section that has all the organic fruit and veg together on one shelf. Organic is オーガニック or 有機 / yuuki in Japanese, so look for those words or the certified Japanese organic label, JAS 認定 /JAS nintei, or simply the JAS green leaf symbol.

We also got a whole nother article on free-range, organic and eco grocery shopping in Japan.

Shopping for meat and other proteins in Japan

You probably want to add some protein, meat or other, to your shopping list and usually, the fish area follows the fruit and veg in Japanese supermarkets. After the seafood area, you can find aisles of meat.

Sakana means fish in Japanese and this is the kanji you will see: 魚

There really are too many different kinds of fish on sale in Japan to list them all, but common ones you will find are タイ/tai (snapper), 鮭/sake or サーモン/sa-mon (salmon), and マグロ or 鮪/maguro (tuna, although often not sustainable).

Fish in Japan is sold in different grades and this is super important (meaning you can’t make sashimi out of everything on the shelf here). The highest grade fish is suitable for raw consumption and should say 刺身用/sashimi-yo (to be eaten as sashimi) on the pack. Other grade fish is for cooking, frying and so on. You get it, heat it up before eating. It will say 生/nama somewhere on the pack if it is fresh fish that was never frozen or 解凍/kaito (defrosted) if it has been frozen before.

If seafood isn’t your thing, all Japanese supermarkets sell meat, called 肉/niku in Japanese (doesn’t it look a bit like a t-bone steak?). Beef (牛肉/gyu niku), pork (豚肉/buta niku) and chicken (鶏肉/tori niku) are found in all supermarkets and some also sell New Zealand lamb (ラム/lam).

If meat is not your thing, you will also find eggs (卵/tamago) and 平飼い (hiragai), 放し飼い (hanashigai), or のびのび (nobinobi) suggest a more free-range form of keeping them. However, this is not strictly regulated in Japan.

Tofu is of course a big thing in Japan, and the kanji for tofu is 豆腐. There are two main kinds, the softer, smoother silken tofu, called kinugoshi/ 絹ごし豆腐which is for cold consumption and the firmer momen (meaning cotton) tofu/木綿豆腐 that can be cooked and used in, for example, hot pots. There are some other interesting types like sesame tofu (胡麻豆腐/goma dofu), which is, you guessed it, made from sesame. They are stocked on the same shelves and come in small containers as they are eaten as side dishes.

Dairy sections in Japan are a lot smaller than in the Western world, but all the staples are here: milk (牛乳/gyunyu), butter (バター/ba-ta), cream (クリーム/ku-ri-mu), yogurt (ヨーグルト/yoguruto).

If you are lactose-intolerant or prefer a vegan diet, almond milk has become available in many Japanese supermarkets recently (アーモンドミルク/a-mondo miruku), but is rather expensive. Soy milk is widely available and called tounyu (豆乳). You can also find soy yogurt (大豆ヨーグルト /daizu joghurt, meaning soy bean joghurt) in some supermarkets.

Staples and basic groceries in a Japanese supermarket

While you probably won’t get into any baking, it is still useful to know that flour is ko/粉. Besides wheat (小麦/komugi), commonly stocked flours include: rye (ライ麦/raimugi) and buckwheat (そば/soba). Tapioca starch (タピオカ澱粉) and cornstarch (コーンスターチ) are also often used in Japanese cooking.

Noodles are definitely the backpacking staple—and you came to the right country if this will be your eat-in diet during your Japan trip. They are, needless to say, widely available. Besides the instant noodles/ramen options, consider whipping up some noodle dishes with dried or fresh ramen (ラーメン), soba (そば), or udon (うどん) noodles. Pasta (パスタ) is also available and usually imported.

A good meal should most certainly be accompanied by an even better drink. Thankfully, beer looks just about the same in Japan as it does overseas and the labels like Asahi and Sapporo are well known enough. However, here is some more advice if you are looking for other hydration besides beer (ビール/bi-ru).

Coffee is simply called ko-hi (コーヒー). Given the selection in the supermarket, Japan clearly seems to go for convenience and favor the instant variety.

Juice is called ju-su (ジュース). Look out for the 果汁 (kaju) kanji and the %, this tells you how much real fruit juice content this drink has. The Japanese lump all soft drinks, even cola(!!!), under the label “juice”.

Oh, and how about some plain old water? The kanji is 水, and it is pronounced mizu.

While beer is one of the most popular alcoholic drinks in Japan, there is of course also sake. There are two kinds, nihonshu (日本酒), which is commonly known as sake in the West and a fermented rice drink. Then there is also its tougher, bigger brother, shochu (焼酎). This is a distilled alcohol from potatoes or other starchy vegetables that has a higher alcohol content and is the more popular of the two among the locals.

Wine (pronounced as usual and written as ワイン), is also available, even from local wine regions, but often rather sweet in Japan.

If you’re a cheapskate visiting Tokyo, allow us to introduce you to your new best friend—the supermarket sticker person! This god among men adheres discount stickers on premade food in store, usually between 1 and 3 hours before a supermarket’s closing time. Nothing tastes better than a bargain!

If you see the 半額, it means the item is half price. If you see a yen amount followed by 引, it tells you how much of a discount you will get when checking out. One more tip: You’ll find discount stickers mainly on the premade food containers, but also on meat and fish. There’s sometimes a discount shelf in the fruit and vegetable corner too.

Basic phrases at the check-out

Most staff in Japanese supermarkets do not speak any English. In general, you will be fine just nodding and smiling at whatever they say, which is usually: Hello, do you have a point card?/That makes X yen/Please visit us again.

If you do not want a plastic bag because you brought your own, say: fukuro ha kekko desu. (It is OK without a bag).

If you are looking for something you can’t find, ask: X ga arimasu ka? (Do you have X?)

Not all supermarkets accept credit cards, so to confirm, you can ask them: Kaado de daijoubu desu ka? (Is it OK to pay by card?)

Before leaving, you can say: Arigatou gozaimasu. (Thank you.)

Oh, and just a quick note: You bag your own groceries in Japan. Not at the check-out, but at the counters placed behind those. You will see it when you get there, so just do as the Japanese do.