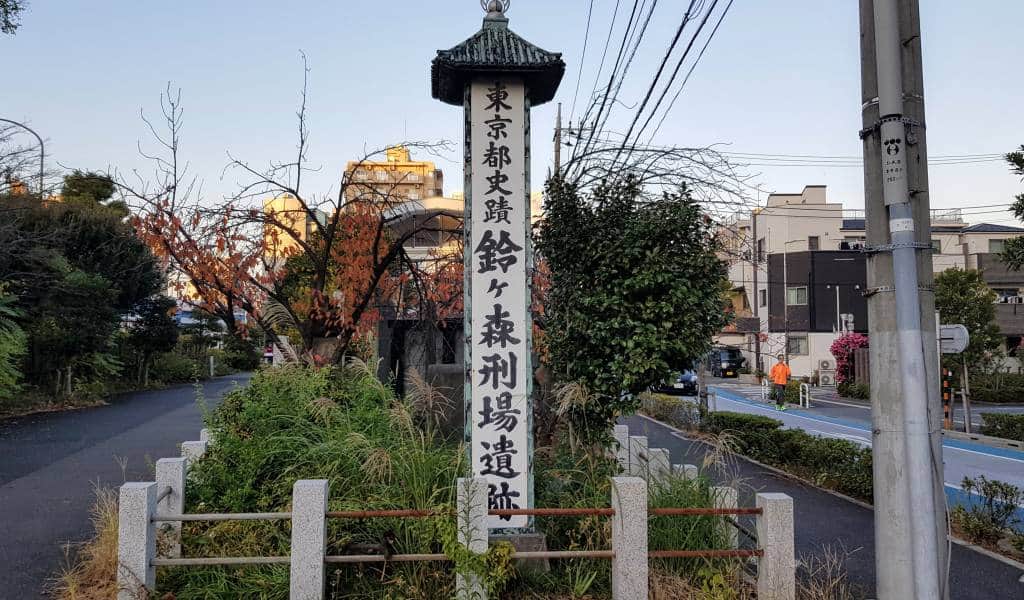 Suzugamori was the site of one of the biggest execution grounds used by the Tokugawa Shogunate in the Edo period to execute criminals, Christians and conspirators. It is believed that between 100,000 and 200,000 people were killed here in the 220 years between 1651 and 1871.

Methods included burning, boiling, crucifixion, disembowellment, and some were hung upside down to drown as the tides rose—so basically, pretty gruesome. If that’s your idea of sightseeing though, this is a great spot!

Major execution grounds were located on the outskirts of Edo, as a warning to those entering—especially to rōnin samurai. The Suzugamori Execution grounds are located right next to the Tōkaidō, the most popular route for travel between Kyoto and Edo, as Tokyo was known and the main southern entrance to the Shogun’s capital. The counterpart to Suzugamori execution grounds to the north of Edo was the Kozukappara Execution Grounds, located next to modern-day Minami-Senju Station.

There is a memorial and remnants including a well, foundations for a burning post and a stone base for erecting a crucifixion cross to which prisoners were tied to before being stabbed with spears.

Taikyō-ji Temple has been located next to the execution grounds since their establishment in 1651, but the current building is modern and of little historical interest.

While feudal-era Japan was by no means unique in employing brutal methods of execution (hung, drawn and quartered anyone?) the remnants of the Suzugamori Execution Grounds are a stark reminder of the more gruesome realities of Edo-era Japan.

Back towards Shinagawa on the Old Tokaido route, you can also see the bridge of tears—where families and loved ones would say goodbye to the condemned, as the execution grounds were not open to the public.

This makes a strange stop-off if you’re visiting the aquarium—but not really a family trip…. or a first-date one for that matter…