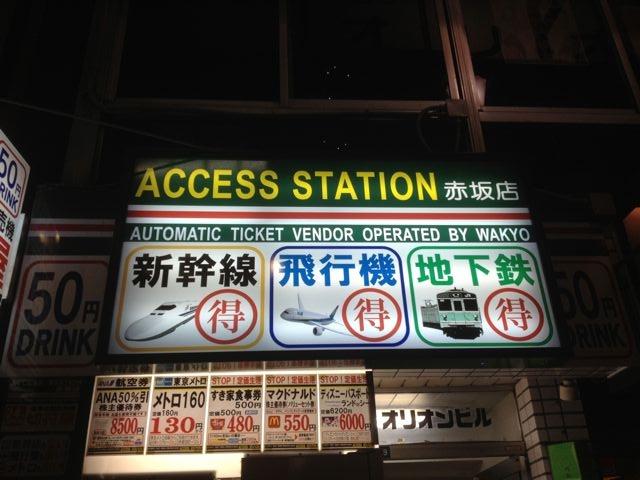 Discount ticket shops have been around for about as long as there have been tickets.  Typically you’ll find them under elevated railway tracks, or squeezed into small spaces between buildings.  The deals seem impossibly good but the grimy appearance of the shops with the price lists plastered everywhere can be a bit intimidating for the uninitiated.  Also the ‘too good to be true’ feeling is pretty strong.  However, these places are legit – they buy tickets in bulk and operate on tiny margins.  They also take advantage of something that cheapo Japanese companies offer to their shareholders in lieu of dividends.  Instead of paying out cash, a lot of companies will send out discount vouchers for their products and services to their shareholders.  If the shareholders aren’t interested in using them, then these are often on-sold to the discount ticket agents.

Anyway, this article is about machines not shops – which have their advantages and disadvantages over the humans in the tiny cubicles.  The big advantage is these things are open 24 hours and if you know what you want, quick. The big disadvantage is really only if you don’t read Japanese.  With a real human you could probably stumble by and work it out – with the machine you’ll have to deal with the kanji.

So what are the deals?  From the photo below you’ll see that most of them are transport related. With Shinkansen tickets, Tokyo Metro tickets as well as parking cards, stamps and a few food coupons.  I like the return Tokyo Metro tickets (actually just 2 x 160yen tickets) deal at bottom left – the saving is only 20yen, but instead of getting lots of annoying change from a 500yen coin, you get two shiny 100 yen coins.  The best deals are actually on the row just below the bottom of this picture.  If you travel on the Tokyo Metro on the weekend, the discounts are much bigger.  So if you’re looking for a ticket for a particular purpose and you don’t speak Japanese, then my suggestion is that you get out your phone and use the Google Translate app.  If you type in ‘Osaka’, it will give you the ‘大阪’ kanji and then it’s just a matter of finding the characters on the buttons.  Note that all the tickets (except the Tokyo Metro ones) are one-way and they’re non-reserved – so you’ll have to line up on the platform for the non-reserved carriages and use your elbows to get a decent seat. 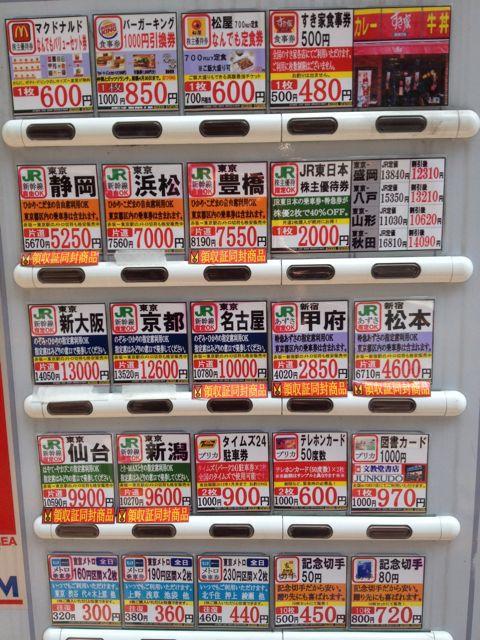 So what are the chances of stumbling across one of these machines?  At the moment, probably kind of low!  I couldn’t find out much info about locating them – even the company that runs this machine didn’t have a location map showing where it’s machines are located!  I’m guessing these are going to start sprouting up all over the place.  The company that runs this one is called Wakyo -> http://www.wakyo2005.com/ (link in Japanese).  The site does have a list of their stores run by humans though.

This particular machine is located next to Family Mart just outside Exit 6 of Akasaka Station on the Chiyoda Line on the Tokyo Metro.

Ultimately the discounts aren’t huge so it’s not worth going out of your way for either the machine or the shops.  However, if you find one nearby, it can’t hurt to save a bit of money.