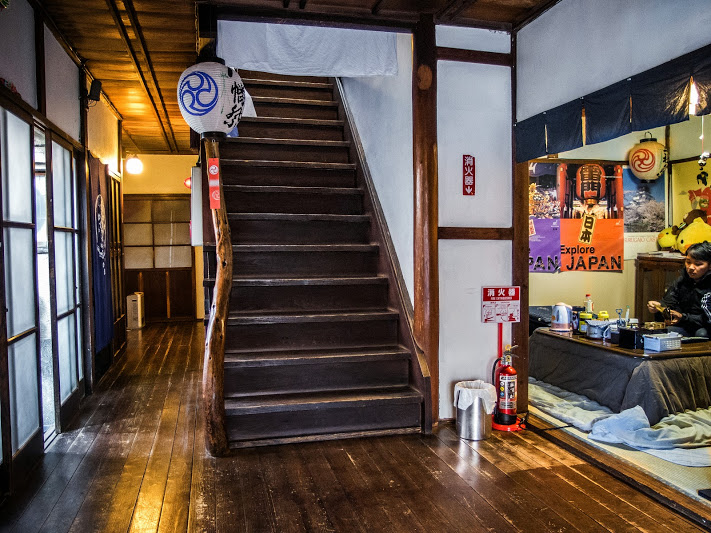 The Ryokan Experience in Asakusa

For most visitors to Japan the word “ryokan” (or traditional Japanese inn) evokes images of really old, really expensive lodgings in idyllic rural settings with kimono-clad staff, classic kaiseki meals and prices that can be easily compared to some of Tokyo’s most expensive hotels (the “real Japan experience”, you see). The thing is that in several areas of Tokyo, Asakusa being one of them, “ryokan” can also mean “a very cheap place to stay” and get the “real Japan experience”—the only thing missing is the idyllic rural setting but hey, this is the world’s biggest metropolis so allowances must be made.

So, for the “real thing” why not try Taito Ryokan in Asakusa? Among the allowances to be made is the lack of private toilet and shower/bath; and in all fairness this can be true of other ryokan, but there the tab would run almost 10 times more! The building is an old style wooden house (it was built in 1950 but was renovated in 2011) with rooms with tatami floors and futon you lay down at night and fold during the day (or not –we’re not going to tell you what to do with your room). It also has a lounge-common room with WiFi, cable TV, magazines, books, a refrigerator, a microwave oven and even a kotatsu heater for the winter and it’s about a two-minute walk from the Tawaramachi station on the Ginza Line and the Asakusa station of the Tsukuba express and about five minutes from the Asakusa station on the Ginza and the Asakusa lines.

Its location puts the Taito Ryokan at the heart of Asakusa: Sensoji temple is also a five-minute walk from there, the Sumida River with its park is perhaps seven minutes, there are dozens of restaurants in a 500-yard radius, the kitchenware paradise Kappabashi starts two blocks from there; even Ueno is just a relaxed 20 minute stroll away. As for the price, it has an elaborate plan starting at ¥3000/night (for 1-6 nights) which goes to ¥2800/night (7-9 nights), ¥2700/night (10-13 nights), ¥2600/night (14-19 nights), ¥2500/night (20-29 nights) and reaching a whopping ¥2000 night if you’re going to stay a full month (30 nights)—this is where the magic ends though: for every night over 30 you go back to square one (¥3000/night for 1-6 nights etc.). Yes, it is among the cheapest roofs over your head you can get—and don’t forget the “real Japanese experience”.

Is it worth it? Personally I haven’t stayed there but several friends have and they had only good things to say plus I have a thing for wooden Japanese houses and tatami floorings so I’d be sold anyway. Sure the amenities are basic but it’s clean, it’s close to lots of things either on foot or by train, the host is amiable and speaks English and seriously, you get to actually live in an old-style Japanese house and get a glimpse how traditional Japan used to be—all that without having to pay top yen. Oh, and there’s also a complimentary bicycle service which will certainly come in handy: in Asakusa, as well as pretty much everywhere in the shitamachi (i.e. old downtown of Tokyo) everyone rides a bike.

Once you’re settled in your accommodation (whatever that may be), you might want to try some of these free things to do in Asakusa.

Pro tip: Read about other ryokan in Tokyo, many of which offer combo accommodation + tour packages.