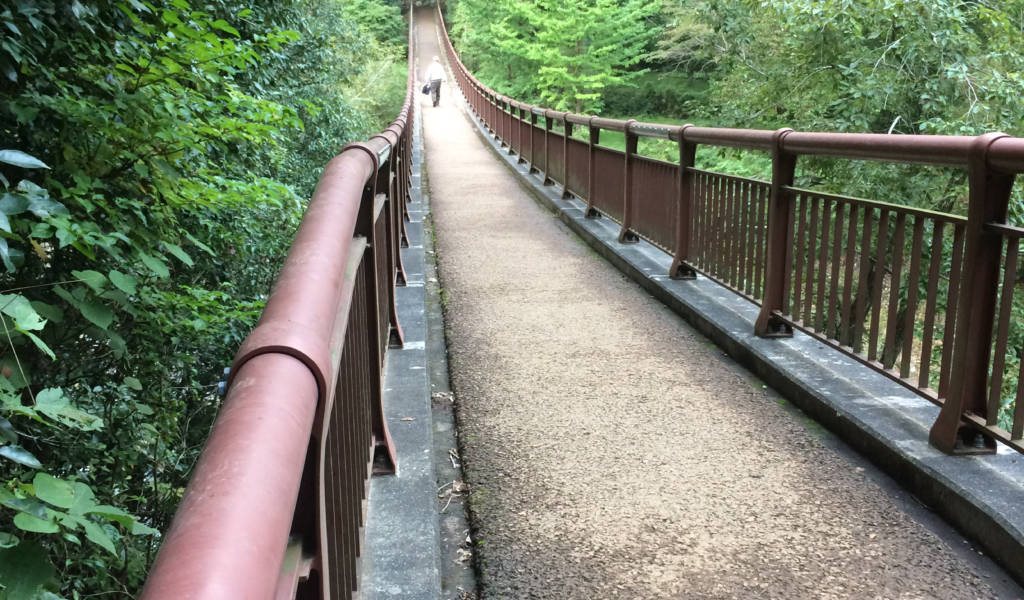 You’re unlikely to see Akiruno on a list of day trips from Tokyo. That’s especially true in English-language media, in which Hakone, Nikko and Kamakura take center stage. But with abundant nature and no shortage of trails, mountains, caves, rivers and gorges, there’s more than enough to see and do if you’re looking to explore somewhere new!

Spanning 96 m (315 ft) across the Akigawa River, Ishibune Bridge offers stunning vistas of Akigawa Gorge. It’s among the area’s main draws, so unless you’re uncomfortable with heights it’s well worth a visit. Throughout November, the thousands of maple, gingko and pine trees lining the gorge form a vibrant canvas of yellows, golds, greens and reds, making this a popular spot for shutterbugs.

It’s a 11-minute bus ride from Musashi Itsukaichi Station. Buses leave every 30 minutes or so, and the closest bus stop is Jurigi. If you’re traveling with a few friends, consider a taxi—you’ll save some time, and possibly a little cash too.

Your other option, a scenic walk, will take around an hour, and you’ll catch some nice views of the river along the way. There are several walking routes around the bridge, but as of October 2018, some were closed due to typhoon damage. The bridge itself is still fully accessible.

If you’re looking to relax before you head back from Ishibune Bridge, you could do worse than this onsen (public hot spring baths), which is just a 10-minute walk away. At ¥900, it’s not exactly cheap, but it’s not wildly expensive either. As with many onsen, tattoos are prohibited. The outdoor area is especially nice, so if you’re itching for a spot of open-air nudity, you’re in luck.

Don’t fancy a full dip? There’s a rather nice foot bath (free of charge) just outside the main complex. I didn’t see any towels near the footbath, so either bring your own or expect to drip-dry!

The area is also renowned for its caves. Otake is the largest and best known, and costs ¥600 to enter. You can also visit Mitsugo Cave for ¥500 (a 50-minute journey from Otake).

Buses from Musashi Itsukaichi leave every 90 minutes, and take around 30 minutes to reach the Otakeshonyudoiriguchi bus stop. There’s not all that much else to do in the area, so you’ll need to commit a chunk of your day just to seeing the caves. In return, you can expect to see some impressive underground waterfalls, stalactites and ponds.

There are plenty of other caves in the area for intrepid explorers, but many of them are off limits to the public—so enter at your personal and legal peril.

Kondo Brewing/Jozoh (近藤醸造) is a small soy sauce factory, apparently the only one left the Tokyo Metropolitan Area, is a fifteen-minute wander from the station, and acts as a nice diversion if you’ve a little extra time. They offer tours, but you’ll need to book in advance. Depending on when you arrive you might see (and smell) the bottling, pressing, and fermentation processes.

Everything is in Japanese—so unless you’re reasonably fluent, bring a friend who can translate or expect to intuit the process yourself!

When it’s over, you’re free to purchase from their well-stocked gift shop. As well as soy sauce, you’ll see other products made on the premises, such as ponzu (a thin, citrus-flavored sauce) and barbecue sauce. There’s even a shipping option, so you don’t necessarily have to carry them home yourself.

What to eat in Akiruno

The area has some great picnic and barbecue spots. The grandly named Barbecue Land (I’d call it a Barbecue County at most) is especially popular, as it borders the Akigawa River. Apparently when the season permits, people jump in to splash around and cool off. Obviously if you plan to go in yourself, watch out for rocks, water or a combination of the two. On a similar note, consider bringing your own shade during the summer months.

You can rent any equipment, and either bring your own food purchase prepacked barbecue sets. If you’re just picnicking entry is free—but you’ll also find many less crowded spots further along the river. When it comes to regional produce, the area is best known for its honey, which you’ll see in most of the local shops

Now, everyone says it’s just an hour away from Central Tokyo. The brochures do. I certainly did. And that’s true to an extent—many of the trains to Musashi Itsukaichi (your target station for the activities above), take around an hour from Shinjuku Station.

Realistically though, some routes take closer to an hour and a half. If you need to be on time for reservations, consider either researching your exact train or leaving a little extra time aside for mishaps. As a rule, Japan has little time for unpunctual people!

Mentioned in this article
Akiruno
Written by: Felix Wilson
Filed under: Things to do
Tags:
Sharing
Questions or comments about this article?
Start a thread on our community forum
Ask our local experts about Tokyo