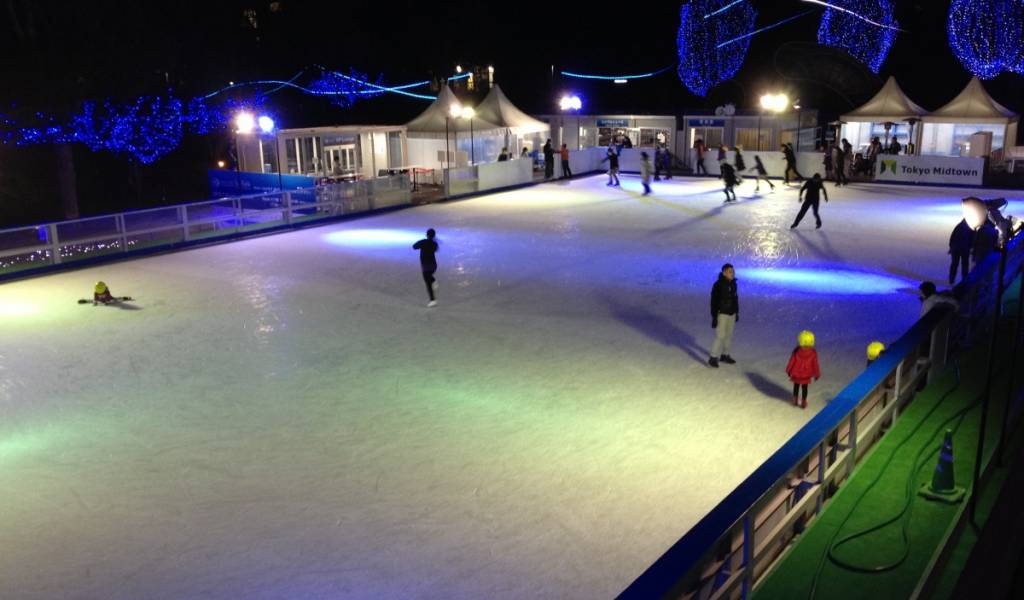 Welcome to the first Cheapo Weekend of 2013.  Coming of Age Day on the 14th stretches this weekend out to a leisurely 3 days. While there’s not much you can get involved in unless you’re turning 20 or related to someone turning 20, if you’re out and about you’ll notice lots of newly minted adults visiting shrines and  drinking establishments in their shinseijin finery. Aside from coming of age, as usual there are plenty of acitivities to enjoy.

As touched on in the last Cheapo Weekend, one of the seasonal activities on offer is ice skating. While the rink at Akasaka Sacas (link in Japanese) has been going since the start of Devember, it’s now joined by the rink at Midtown which covers the grass square where the Christmas illumination was. In the Kanto region, there are also notable outdoor rinks at Toshimaen and the ‘Art Rink’ at the ‘Akarenga‘ red brick warehouse harbourside complex in Yokohama.  Akarenga offers the best deal – 500yen to enter the rink (400yen for kids) and 500yen more to hire skates.  Akasaka Sacas charges 1,000 yen for a 1 day pass and a separate 500yen for skate hire.  The Midtown rink assumes you don’t have your own skates and charges a flat 1,500yen for adults and 1,000yen for kids. There’s also a 2,600 yen ‘pair ticket’ available for pre-purchase at convenience stores.  Toshimaen includes admission to the amusement park so it’s a bit more expensive – 2,000yen for adults and 1,500yen for kids. However, if you go after 3pm, it goes down to 1,200yen for both adults and children. The rinks at Midtown, Sacas and Toshimaen are all open until the start of March while Akarenga finishes about a week earlier on the 24th of February.  You may be required to wear gloves as well, so take your own so you don’t have to purchase gloves there.

If wrist injuries and a bruised posterior aren’t your thing, then there are a few winter festivals on at the moment too.  For a kind of ‘Matsuri Lite’ experience, head to Tokyo Dome City for the Furusato Matsuri Tokyo. The festival runs from this Saturday the 12th of January through to the 20th and features parts of most of the famous regional festivals from around Japan. There will also be a variety of regional delicacies on sale that you wouldn’t be able to get unless you go to the particular area. Ramen burgers anyone?  The closest stations are Suidobashi on the JR Chuo and Toei Mita Lines and Korakuen Station on the Tokyo Metro Marunouchi and Namboku Lines.  For something considerably more authentic, take the Chuo Line way further out west to Oume for the Oume Daruma Market (link in Japanese). Daruma are a plump looking traditional Japanese doll that are thought to bring good luck.

For something a bit different, we recommend the Space Ball (link in Japanese) at Tokyo International Forum. This actually began in mid December and finishes on January 27th. The Youtube video below will give you the best idea of what it is – basically you enter a sphere and a movie is projected onto the entire inner surface giving you a fully immersive space-travelling experience. At 1,800yen for adults and 600 yen for elementary school aged children, the tickets aren’t amazingly cheap but it’s still comparable to or cheaper than a movie. If you can work out how to pre-purchase, you can get tickets for 1,500yen for adults and 400yen for children. Closest station is Yurakucho Station on the JR Yamanote Line and the Tokyo Metro Yurakucho Line.