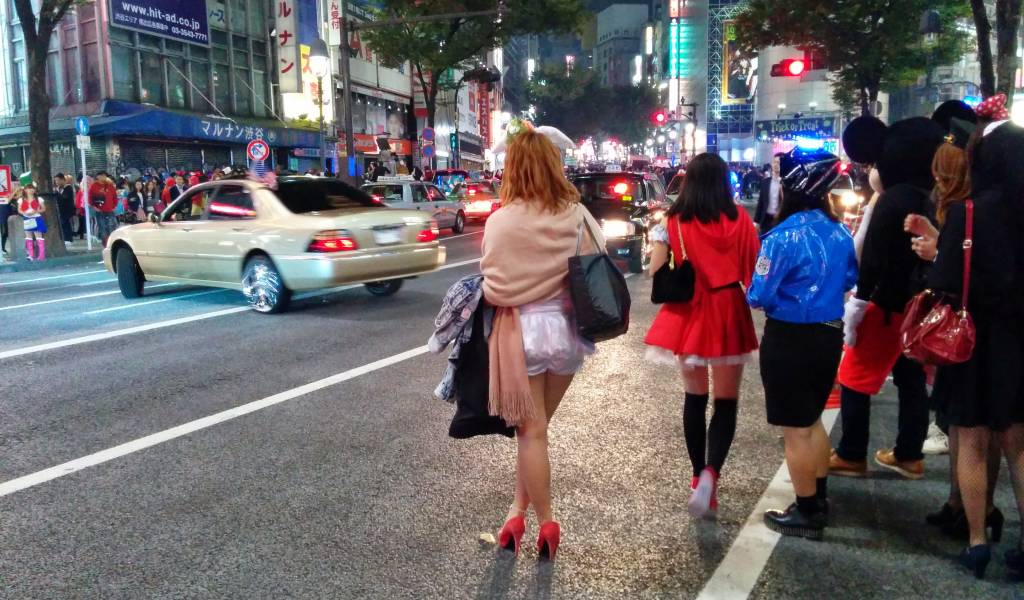 Shibuya Hallowen 2014 – It was bonkers here last night, and that’s putting it lightly! At the start of the evening it was already pretty crowded with costumed merrymakers arriving from every direction. Soon scores of police descended on the area to keep the roads clear, the party people were all well behaved of course, just spilling out into the roads.

The ever popular “DJ Police” (as the locals call him) made an appearance at Shibuya scramble crossing, shouting at people through his loud speaker, telling people to cross in an orderly fashion. Many people were shouting at him “nice costume, super realistic”.

However it was the drivers themselves that needed to be told to cross in an orderly fashion. There were colorful, noisy and ridiculous vehicles ploughing through Shibuya all night—neon light bikers (bosozoku) doing wheelies and revving their motors. Ferraris, Mustangs, and Bentleys all screeching through and some sort of party bus.

By the peak around 11 pm, it was a veritable Halloween human traffic jam with around 50-70% wearing some sort of outfit.

Everyone was taking photos with everyone, school girls posed with swat teams, zombies and fairies arm in arm. There must be billions of Halloween combo photo memories polluting Japanese Facebook right now. Here’s a few snaps I took before my smartphone battery died:

How to Win at Halloween

So when everyone is dressed up, and pretty much any combo you can dream up is covered—military school girl, zombie nurse, swat team fairy—how do you stand out?

Well here are some winning tips:

A New Event in Japan?

Halloween has really exploded this year. As people who have lived here for more than a few years will know, it was mostly a painful memory of locals bitterly complaining about the “Halloween Yamanote Party Train” (an unsanctioned hijacking by costumed foreigners of one of the cars of the Yamanote line) with celebrations usually confined to Roppongi. Shibuya was at it’s most lively, happy and bonkers last night, and this was the culmination of almost 2 weeks of build up, with similar but slightly smaller scenes the weekend before.

If this continues every year, the colorful spectacle of Halloween costumes, could rival the pull of Autumn leaves for a reason to visit Japan!