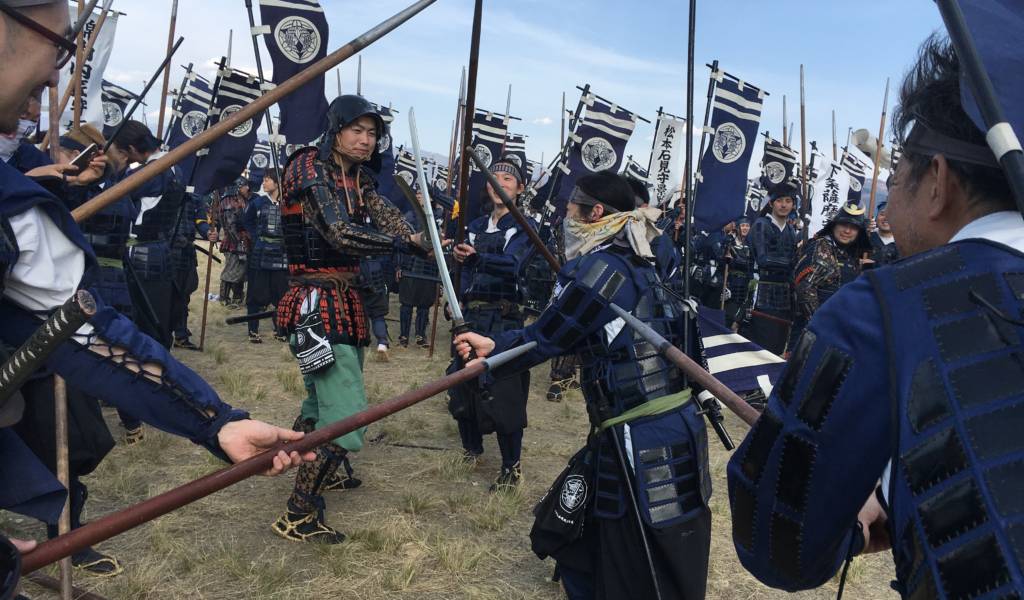 Tokyo has some places—Shinjuku’s Samurai Museum, for one—and events that offer visitors the chance to put on samurai armor. While an experience like that is already fun in itself, how about taking it to the next level and fighting as a samurai? That’s right, there’s an annual historical reenactment that wannabe samurai can sign up for: the Battle of Kawanakajima reenactment at Yamanashi Prefecture’s city of Fuefuki. Think you’ve got what it takes? Then let’s get down to business.

There were actually five—not one—battles fought at the plain of Kawanakajima (a part of present-day Nagano Prefecture) during Japan’s Sengoku (Warring States) period (1467-1603), all of which involved the warlords and fierce rivals Shingen Takeda and Kenshin Uesugi.

The fourth battle, which took place in 1561, has gone down in history as the most memorable one. Dramatic, bloody, and (according to a historian) “tactically interesting,” it resulted in a high number of casualties for both sides. Takeda managed to drive off Uesugi’s forces, but it was no easy feat or decisive victory. Uesugi and his men put up a good fight, with Uesugi himself even managing to attack Takeda, and Takeda losing some of his esteemed generals.

Not only has this battle been immortalized in literature, art, games, and films, but also, reenactments are held in two cities each year: Yamanashi Prefecture’s Fuefuki and Yamagata Prefecture’s Yonezawa. In this article, we’ll focus on the Fuefuki reenactment.

The site of this reenactment—the banks of the Fuefuki River—is closest to Isawa-Onsen Station on the Chuo Main Line. You can get there directly from Shinjuku Station in just a little over 90 minutes via limited express (prices start at ¥3,610 one-way), but if you want to save some money and don’t mind a longer trip, you can take the Chuo Line (the one with orange signage) all the way to Takao Station, then switch to the Chuo Line (this time, the one with signs in blue) bound for Kofu. The longer trip will take around 2 hours and 50 minutes, and will cost ¥2,270 one-way.

From Isawa-Onsen Station, it takes roughly 20 minutes to walk to Fuefuki River. If you’re participating in the reenactment, though, you’ll have to head to your designated assembly point first, which will typically be a few minutes’ walk from the station.

A tradition since 1979, Fuefuki’s annual reenactment was always held in April as part of their spring festival; however, it will be held in autumn from 2018 onward. It’s free to watch, but you’ll have to register and pay to join the reenactment. (Read on to find out how!)

Typically, the reenactment starts in the afternoon, but before that, other festival activities and attractions will already be set up. In 2017, the festival even had an experience corner with activities related to the Sengoku era. Past 1 pm, the much-awaited highlight of the festival begins with a procession of soldiers, generals, noblewomen, and key figures in the Battle of Kawanakajima. Departing from their assembly points, troops head to the Fuefuki River, so don’t be surprised to see soldiers marching along the streets of Isawa Onsen.

Following the opening remarks and speeches from Lords Uesugi and Takeda, cannons and muskets signal the start of battle. Volunteers dressed as soldiers charge into the fray, hacking and slashing at their enemies, but with smiles on their faces as they relish the sheer awesomeness of being a warrior for a day.

Some play dead only to get back up again; others team up to strike an enemy soldier; still others ham it up for the cameras. Meanwhile, hired actors battle it out on the bridge; some even wade into the river to attack their opponents. (Unfortunately, to ensure everyone’s safety, volunteers don’t get to perform such daring feats.)

After battling it out for a bit, the event finally comes to a close at around 4:00 pm. Making a dignified exit, victors and losers alike march back to their assembly point to call it a day.

While this reenactment is a lot of fun to watch, it’s a lot more fun to be part of it. The exact date for 2018 hasn’t been disclosed as of this writing, but it will be in late October or early November. Sign-ups usually open a few months in advance. Check back here for more information, although the website is only in Japanese.

To sign up as a regular soldier, it will cost ¥5,000, which includes a chance to wear samurai armor, lunch, and a commemorative photo. The organizers typically need around 600-800 volunteers, but sign-ups close quickly due to the popularity of this event. If you badly want to join, keep yourself updated so you can register as soon as possible.

As long as you’re in good enough physical condition to run around in heavy armor, and you have enough common sense not to recklessly brandish your sword (an imitation, but it can still injure people!), you’re good to go. Besides, there will be a rehearsal a few hours before the battle—you’ll learn how to move in formation so that you won’t be running around like a headless chicken while looking for your comrades.

While you might need to know Japanese to sign up (or you can get a friend who knows Japanese to help you), you can join the event despite speaking no Japanese, as there will be English-speaking volunteers to assist you. If you’re still worried about the language barrier, get a Japanese-speaking friend to sign up with you—the more, the merrier, right?

Other attractions in the area

¥2,270 in transport costs isn’t that cheap, so you might want to make the most of your trip. As the station name implies, Isawa-Onsen is a hot springs town; the foot bath right outside the station will serve as a reminder of that fact. Should you choose to spend the night, there are a number of onsen ryokan in the area—most of their baths are also open to day-trippers.

Yamanashi Prefecture is Japan’s top producer of wine, so Isawa-Onsen has its share of wineries. Yamanashi Mars Winery and Monde Winery, both 10 minutes on foot from the station, offer factory tours that include wine sampling. It’s highly recommended to book in advance. Additionally, Isawa-Onsen is known for its peaches and grapes; the former can be picked in spring, while the latter can be picked from summer to autumn.

Written by: Tiffany
Filed under: Events | Japanese Culture And Tradition
Tags:
Sharing
Questions or comments about this article?
Start a thread on our community forum
Ask our local experts about Tokyo