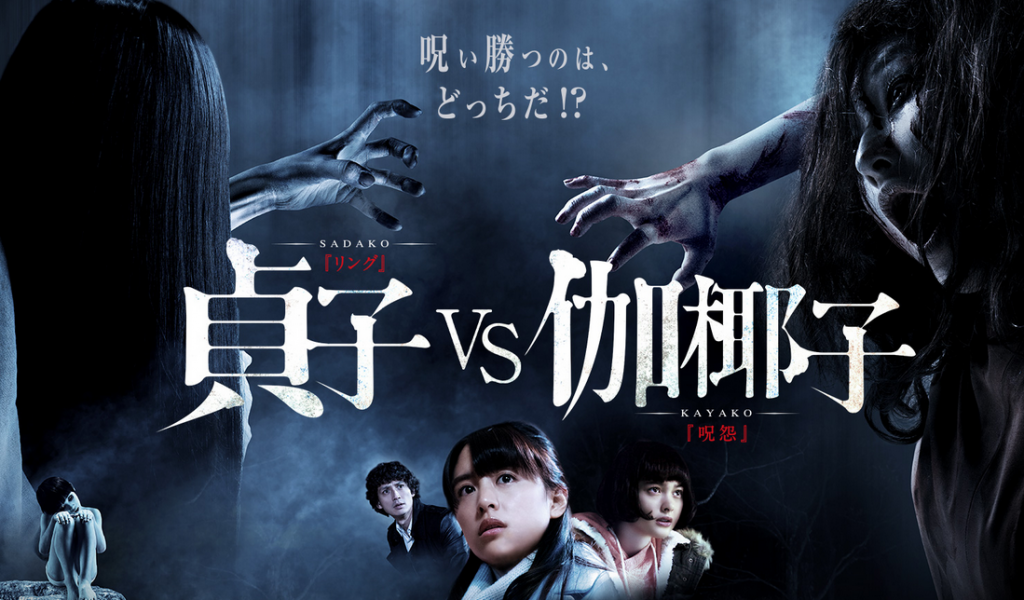 Last month, the big question for movie-goers in America (and many other countries as well) was: Team Cap or Team Stark?

But this month, in Japan, avid horror fans have this question on their minds: Team Sadako or Team Kayako? Sadako vs Kayako, the film that was once thought to be a mere April Fools’ joke, hits theaters on June 18th, after all.

Proving that death was only the beginning, these two J-horror icons have gone on to achieve greater things in death than they ever did in life. Not only did they kick off a wave of horror films featuring long-haired female ghosts in the early 2000s, but it’s also fair to say that they’re the best-known figures of J-horror, owing to the American remakes of Ring and Ju-On: The Grudge.

But now, instead of focusing on scaring the living hell out of movie-goers, perhaps Sadako and Kayako can afford to take themselves less seriously this time. Of course, scaring is still part of their agenda, but, for better or for worse (understandably, some horror fans aren’t too pleased about the Ring and Ju-On franchises becoming a joke), Sadako and Kayako have been going all-out in promoting their upcoming film in some pretty unexpected and hilarious ways. Clearly, the marketing team has been having a lot of fun thinking of how to promote this film.

For one, you’ve probably heard of Sadako and Kayako’s baseball match. Additionally, these two ladies have adapted quite well to modern technology, with Kayako and her son Toshio sharing an Instagram account, in which they post snapshots of their daily life (who would’ve known that the undead lead pretty ordinary lives too!), and Sadako having a Twitter account (surprisingly, she is quite nice, and isn’t cursing people left and right!). Then, perhaps in the spirit of becoming triple (or more) threats, like many actors/singers/models have aspired to be, they’ve ventured into pro-wrestling and horse-racing. They’ve also starred in >a series of PSAs reminding movie-goers to behave.

They’ve also collaborated with the most unlikely of characters: Hello Kitty. On June 18, some cinemas will be selling Sadako/Kayako/Hello Kitty tie-up merchandise—towels, a memo pad, clear files, pens, tote bags, postcards, and key holders. These aside, there are also many other kinds of promotional merchandise—check the lineup here. If you want their to-die-for beauty secrets, get Sadako and Kayako face masks, and if you want an undead drinking buddy, get a Sadako or Kayako/Toshio cup hanger.

And if those aren’t crazy enough, Sadako and Kayako have also tried their hand at heavy metal, while little Toshio apparently can bust a groove! Here they are, starring in the music video of the movie’s theme song, “Noroi no Shananana” (“Shananana of the Curse”).

But there seems to be no end as to what Sadako and Kayako have been up to! They say that showbiz and politics are closely intertwined, and it looks like both ghosts want to make J-horror great again! There’s an ongoing poll (deadline is June 17th) as to who’s the scarier ghost—by tweeting the appropriate hashtag for your candidate of choice, you get to cast your vote, and you stand a chance at winning Sadako vs. Kayako items. Unsure who to vote? In a parody of presidential elections, the poll page has videos in which each convinces the audience that she’s the better candidate.

And just last Sunday, the two took their campaign to the streets of Shibuya, of all places! One vote meant a photo op with one’s candidate of choice. What’s more, in between photo ops, multiple Sadakos and Kayakos would gather to dance to the movie’s theme song—a very amusing sight, to say the least.

To take the campaign further, creepy trucks with Sadako and Kayako figures went around Shibuya. With a giant Deadpool also doing the rounds, being at Shibuya on June 5th meant seeing some pretty interesting things. Even ghost ladies couldn’t help but check Deadpool out:

This author was initially indifferent to Sadako vs. Kayako, but is now planning to watch the movie (while not expecting it to be all that scary) because of the publicity. What about you? Are you on Team Sadako or Team Kayako?

Whichever side you’re on, don’t forget to check out our guide on how to save on movie tickets in Tokyo.

Written by: Tiffany
Filed under: Movies, Shows and Theatre
Tags:
Sharing
Questions or comments about this article?
Start a thread on our community forum
Ask our local experts about Tokyo