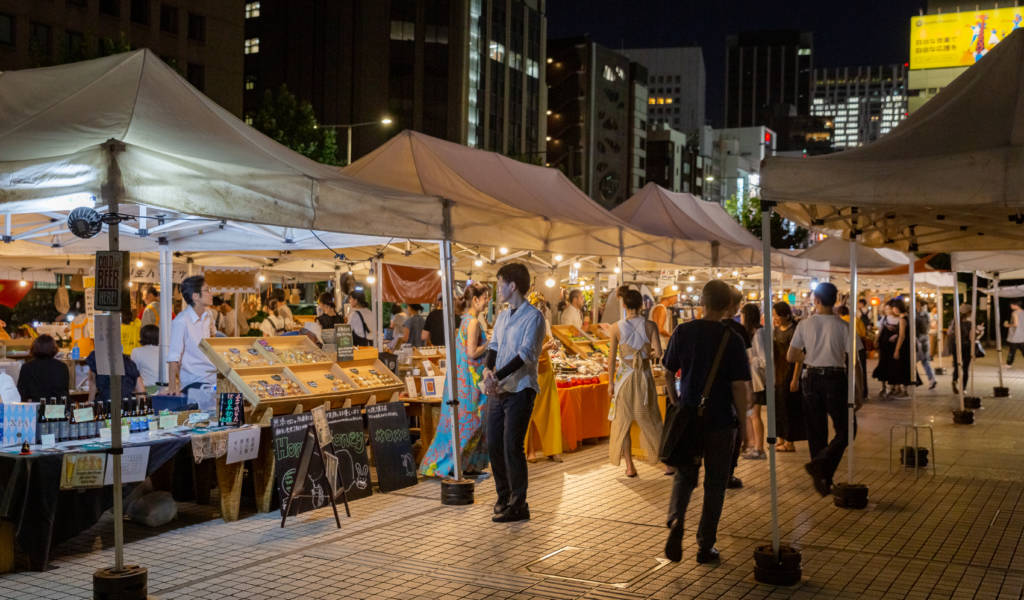 Anyone who’s experienced a Tokyo summer knows after dark is the best time to explore the city. Once the sun has retreated, and the concrete has cooled down, comfortably warm summer evenings feel long and full of endless possibilities. Even more so now thanks to the arrival of the first regular Tokyo night market.

The Night Market was created by the team behind the Farmer’s Market and the outdoor food truck and bar hangout Commune 2nd—a Tokyo Cheapo favorite—both located in Aoyama.

For the past decade, the Farmer’s Market has been supplying conscientious shoppers of Tokyo with incredible food, fresh local produce, artisanal wares, and vintage goods. But more than that, it has become a community hangout of sorts. It’s a place where people can catch up with friends, grab a coffee or lunch, and enjoy free live entertainment.

Like the the diurnal market, the Night Market has the same creative community ethos, but with a more after-dark vibe. The entertainment is turned up a notch, the food more dinner-centric and the booze is flowing. It’s part wholesome farmers’ market, part inner-city block party.

We went along to the first edition of the 2019 Night Market to see just what to expect, and spoiler alert: you can expect some pretty great things.

The Night Market is best described as an after-dark incarnation of the Aoyama weekend staple, the Farmer’s Market held on the grounds of UN University. “This September marks the 10-year anniversary of the Farmer’s Market,” says Kaede Sakai, one of the event’s key organizers.

“We’ve also been running a night market for a little while now,” Sakai said,“but last year it was held out in Otemachi.” This year is the first time organizers have combined the day events with the evening market in the same location. While the transition between day and night market is smooth and many of the stalls continue to run throughout both, “the vibe is pretty different,” she explains.

“The Farmer’s Market has always been a market run by those who live around here. It’s where chefs working around here buy their vegetables for their restaurants.” The main difference is that after dark, the site is “more fun, it’s a chilled, laid-back vibe with live music and entertainment.” In other words, it’s less business and more party.

The team behind both events are also collaborating with more Tokyo-based creatives to build on the lively, progressive feel of the Night Market.

One of the key collaborators is RAW TOKYO, which Sakai describes as a “futuristic flea market.” RAW is a collective of creatively minded entrepreneurs and is “mainly populated by a lot of vintage clothes vendors and people making craft products, jewelry, pottery, those types of products,” says Sakai. It’s here you’ll be able to pick up some one-of-a-kind pieces while getting the know the people behind the product. “What’s great is that the people who actually make the products are gathered here.”

RAW TOKYO was established just a few years ago, but it has become an integral part of the Farmer’s Market and Night Market’s DNA. Previously they ran every first Saturday and Sunday of the month during the daytime Farmer’s Market. Now they’ll also make an appearance during the evening event.

What to eat and drink

In general, Tokyo can be a tricky place to find night-time alfresco dining options that are both budget-friendly and vegetarian/vegan-friendly. But if you’re looking for a place to sample some of the best local and international cuisine, then the Night Market has your bases covered.

Throughout the year, the site hosts a rotating roster of pop-up food stands serving a globe-spanning range of dishes and drinks. Taco truck Taco Tora is one such example of the Night Market’s vibrant culinary scene. A balance of international influence and Japanese charm, Taco Tora serves up handmade, Sonora, Arizona–inspired food from the back of a kei truck—a compact Japanese pick-up truck.

“I helped a friend bring the truck to the Farmer’s Market about this time two years ago,” says Stuart, a Taco Tora key member. “There was a two-year period where I was running the stand by bicycle, on a trailer. I started using this truck in April, and I’ve been doing it 2–4 times a month.”

When asked about what he thinks of now working at the Night Market market too, Stuart believes “it’s a little different,” but in the best possible way. “From my point of view, it’s more relaxed, people buy more alcohol, which from my point of view is a good thing.”

It’s an excellent time to unwind and cool off a bit, he thinks. “In August it was miserably hot, so I think some people were hesitant to come out, but after the sun goes down a little bit, it’s more comfortable.”

Beyond tacos, you can expect everything from pizza, burgers, sweets from Aomori, craft beer from Nagano, and plenty of refreshing snacks and drinks. You can check out the full list of vendors on the Farmer’s Market vendor page.

In addition to RAW TOKYO, and the regular stalls, the Night Market will host a handful of special themed mini-festivals in celebration of all things food, drink, and fun. One of the biggest days on the calendar is the after-dark Aoyama Sake Flea, a showcase of some of the best sake brewers in the country.

On the debut night the market hosted SWEETS + SAKE, which Sakai calls a “spin-off event,” a showcase of what to expect later in the year. “For the spin-off, we collaborated with some of our favorite sweets makers and sake breweries,” she tells us. Keeping true to the market ethos, “they’re mostly vendors of ours, and friends of friends.”

But for Sake Flea on August 31, 2019, it’s a more formal gathering. “It’s going to be a huge event,” Sakai predicts, “with 30-40 brewers from all over Japan coming to the site. There you’ll be able to do tastings.” It’s worth noting that this will be ticketed, so for more information, stay tuned to the Farmer’s Market website or Facebook page.

If sake isn’t to your taste, then on September 7 and 8, 2019, the market will also be hosting Juniper Tokyo. It’s a gin festival focusing on craft gin and juniper berries. For more information, visit here.

The regular Farmer’s Market runs every weekend from 10 am to 4 pm, transforming into the Night Market after dark on Saturday, August 31 and Saturday, September 7, 2019.

It’s located on the grounds of the United Nations University, Aoyama. It’s about a 10-minute walk from Shibuya Station, or a 7-minute walk from Omotesando Station on the Tokyo Metro Chiyoda, Ginza Line, and Hanzomon Lines.

Entry to the market is free. However, a select few special events are ticketed. All information is on the Farmer’s Market website.

Open with Maps
Written by: Lucy Dayman
Filed under: Music and Nightlife
Tags:
Sharing
Questions or comments about this article?
Start a thread on our community forum
Ask our local experts about Tokyo