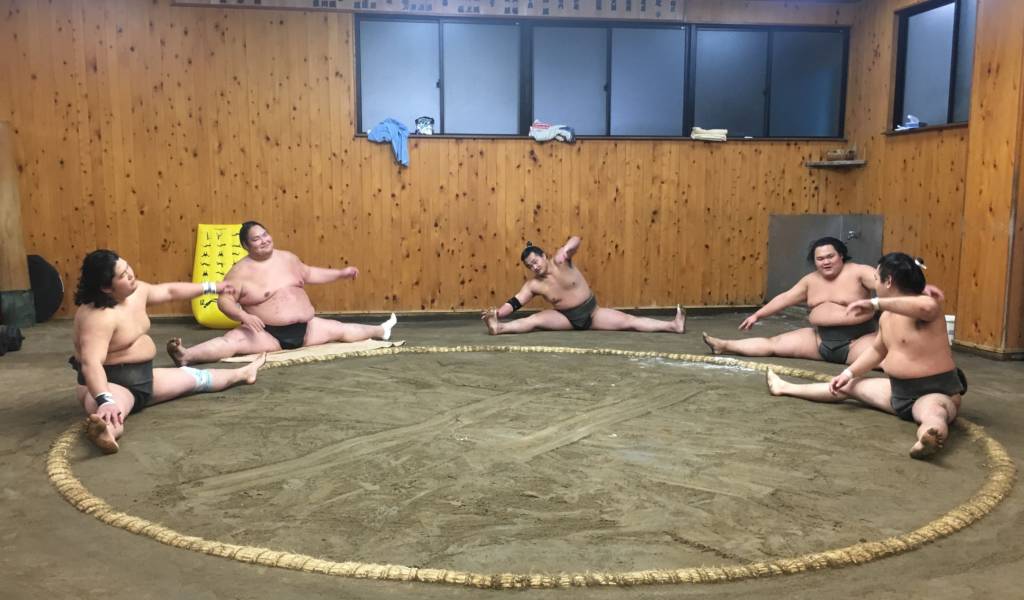 Thinking about joining a morning sumo practice tour in Tokyo? We sent one of our writers along on one so we can tell you all about it. Read on for an inside scoop into sumo training, including background on Japan’s national sport and the big bois who take part in it.

The day we went to check out training at Oguruma-beya the rooms smelled like a mix of sweaty gym and baby powder. When we arrived, most of the rikishi (the wrestlers) were already in the training room and warming up by — you guessed it — doing the famous sideways stomp. The only sound, the thigh slapping and shouting by the wrestlers, was slightly muffled by the wooden walls. This ritual is supposed to expel bad demons from the dohyō (ring), while warming up the leg muscles.

It went on for quite a while before the “real” training started. This was also the time when the oyakata (stable master) showed up. He plunged into an armchair and like a kind of sumo godfather started to give curt comments on the fighters’ weight, condition, and moves, which were inevitably retorted with an enthusiastic, military-style “hai!” (yes!).

Editor’s note: Oguruma-beya, or Oguruma Stable — “stable” is the English word used to describe the facilities in which the wrestlers live and train — is located in Tokyo’s Kiyosumi neighborhood. It’s one of several stables in Tokyo, most of which are on the east side of the city.

Sumo, behind the scenes

Looking around the room, you might wonder why some of the rikishi still look relatively slender while others are around the 200kg mark. The fighters ideally get recruited out of middle or high school and then start increasing their weight very gradually to avoid health issues: ideally, they gain 10-12kg per year. A sumo fighter’s performance peaks around 27 to 32 years, so most likely, the bigger guys will also be the older guys.

The training progressed from exercises to actual fighting and the younger fighters tried to push their senpai (senior), the heaviest and most advanced among them, out of the ring. At Oguruma Stable, this was a chap called Amakaze, who weighs over 200kg. He was sporting a big grin as younger fighters half his weight tried to push him out of the ring.

No kicking or boxing is allowed in sumo. The goal is to either push your opponent out of the dohyō with flat hands, or to knock him off balance so that he will touch the ring with any part of the body other than the soles of his feet. Another way to lose is if your mawashi (loincloth) comes undone, which certainly would be an interesting end to the match.

Besides the fact that you will be sitting so close to the ring that you can smell the mix of sand and sweat, observing sumo training also gives you the opportunity to see a side of the fighters’ lives you don’t get to see during the tournaments. The hierarchy amongst the rikishi becomes apparent, and even if you don’t speak Japanese, you can see the older fighters both teasing and advising their younger stable mates.

Useful links for arranging a sumo training experience in Tokyo

We recommend checking the schedule for available booking dates for a sumo experience on Viator and Magical Trip. Note that training only takes place outside of tournament seasons.

Once you have made your booking, a guide will email you with the details, including the early morning pick-up time and location, rules and stable names.

Ahead of the tour, you can pop over to the official sumo website and check out your stable’s oyakata, rikishi and their ranks.