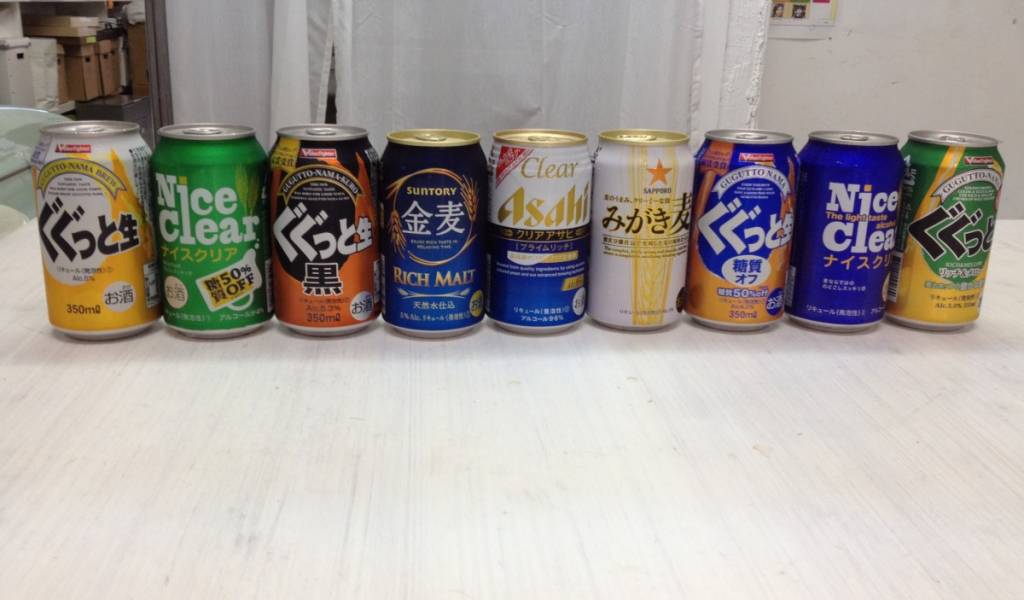 OK, let’s start with the obvious – none of these are technically ‘beer’.  Under Japan’s anachronistic liquor taxing laws, drinks with a high malt content (ie. beer) are taxed at a higher rate. The consequence is what you see above – new classes of drinks that approximate beer but skirt the rules so that they can be sold dirt cheap. Although they cannot be labelled as ‘beer’ you can usually identify them with names like “draft”, “brew”, “nama” or with malt motifs on the can.  All the “beers” above are labelled as “liquer” – so they attract a very low tax rate.

The products at the top of this post are just a small sample of the ultra-cheap beers available. While the original intention was not to break the 100yen barrier, two of the drinks above came in at 109yen.  Also, anyone who knows me will confirm that I’m a beer snob – so to provide some balance I recruited two tasting assistants – Ben from Germany and Shuko from Japan. All ratings are from zero to 5 based on appearance, aroma, mouth-feel but mainly taste.

Gugutto Nama from Yamaya – like Nice Clear from Hanamasa – is imported from Korea. It pours a very light, pale colour with low carbonation and a smell of spirits in the aroma. The taste is weak and thin – like a fizzy drink with alcohol added. Ingredients say it has co2 gas pumped into it – just like those soda stream machines from the 1980s. Not recommended

This made in Korea “near beer” tastes awful and smells like floor cleaner. Threw it out after a few sips. Remarks: “Like eating flour” – Ben

This beer is so bad I feel like I want to rinse my mouth out after just a few sips. Remarks: “Smell is awful” – Ben

Sweet and crisp but seriously lacking in taste – the same as the gugutto with the soft drink feel.  Remarks: “Not really satisfying but would probably be OK if I was really drunk.” – Ben

The amusing thing about the Gugutto Nama beers is that they have all won either Gold, Silver or Bronze in a “Mondo Selection” – presumably Gugutto Nama was the only entry and the judges had never tried beer before.  However, this was probably the better of the Gugutto Namas.  The look and smell was just like a rum and coke. The taste reminded me of my student days when I’d start drinking a can of beer that someone had used to put their cigarette out.

This smells like methylated spirits and is very thin with almost no body.  Remarks: “Like apple juice” – Ben

This beer pours very clear and weirdly has absolutely no smell – probably reflecting the vodka like spirit used to give it a kick. Remarks: “Full bodied awfulness” – Ben

This has a lovely appearance on the pour with a frothy almost creamy head. Remarks: “Beer-like, although gets worse as you continue drinking” – Ben.

In creating an affordable beer like drink, the makers have had to make some big compromises. On the whole, those compromises have lead to some horrible tasting drinks. However, if you have to scrape the bottom of the beer barrel, it seems that you are better to stick with some of the bigger brands such as Asahi, Sapporo and Suntory.