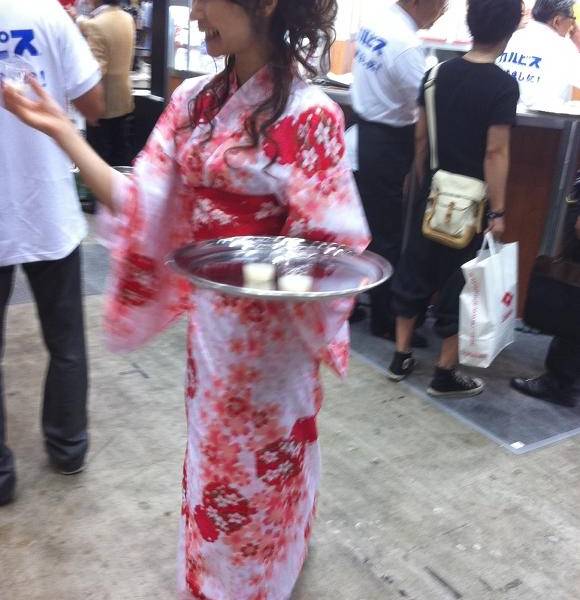 Enjoying Gourmet Food and Drink for Free at Trade Shows

Tokyo is a major venue for food and drink related trade shows.  The huge and affluent Japanese market is a big draw to foreign food exporters and also events aimed at the domestic hospitality industry are enormous in scale.

The two major venues in the Kanto region for these shows are Makuhari Messe – roughly half way to Narita Airport – and Tokyo Big Sight which is closer to the centre in Odaiba – the place where giant 80s architectural follies went to die.

Technically these are industry events and shouldn’t be open to the public.  However, if you are non-Japanese and you sign up on their web site in advance, it’s a lot easier to get in.  It probably helps if you are clean cut, tidily dressed and go with a name card as well.  Many of the exhibitors will require you to hand over a business card or put one in a box to go in the draw to win something before you’ll be able to sample what they have to offer.

The most well known major food related trade show is Foodex, which runs at Makuhari Messe.  The last day of the event especially (when exhibitors basically have to give things away or throw them away) sees hordes of Japanese housewife gatecrashers who basically dismantle the entire venue – the attraction being all the interesting imported food that wouldn’t normally be available.  However, if you hail from the same place that the food came from, you probably won’t be that impressed.  Our recommendation is an event at Tokyo Big Sight aimed at the Japanese hospitality industry – the Izakaya Expo.  When I went to this in 2010, I tried local and Belgian beers, wasabi infused olive oil, fresh New Zealand oysters, maguro sashimi and most interestingly – whole deep fried bonito heart (it was chewy).

Of course, if you go along to something like this and you’re not in the industry, then you are technically scamming it – so first make sure you have your story straight and second, don’t go overboard.  If large numbers of drunk foreign tourists start crashing these things then the loophole will probably end up being closed pretty quickly.  If you need to make up a story, you could tell people that you are in the media and you are writing about the event or the industry or perhaps you are interested in selling the food in your home country.  A lot of the exhibitors at the domestic events don’t have much international exposure, so you never know – perhaps you will end up selling their products in your home country.